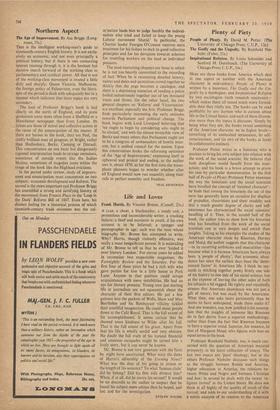 Frank Harris. By Vincent Brome. (Cassell, 25s.) A LIAR, a cheat, a blackmailer, a randy cad, a pretentious and inconsiderable writer, a crashing failure; a thief and murderer in youth, if his own account is to be believed; a sponger and pornographer in age; such was the man whose biography Mr. Brome has attempted to write. Why? Harris, though violently offensive, was really a most insignificant person. It is misleading of Mr. Brome to tell us that he ever 'lorded it over literary London.' For eleven years he edited in succession two respectable magazines,' the Fortnightly Review and the Saturday. For the first four of these years he had a rich wife who gave parties for him in a little house in Park Lane., Anyone in that position could scrape acquaintance with some notabilities. He had an eye for literary promise. Young men just starting life in journalism are not squeamish about the character of their first editors. He put a few guineas into the pockets of Wells, Shaw and Max Beerbohm and his flamboyant villainy tickled their youthful imagination. He could shout people down at the Café Royal. That is the full extent of his accomplishment: It seems certain that he showed some kindness to Wilde after his fall. That is the full extent of his grSce. Apart from that his life is wholly sordid and very obscure. No doubt the full truth of his various financial and amorous escapades might be turned into a lively story, but it can never be known.

Mr. Brome is not very generous with the facts he might have ascertained. What were the dates of Harris's editorship of the Evening News? What was the date of his going to prison or the length of his sentence? To what 'famous clubs' did he belong? Did his first wife divorce him? When, if at all, did he marry his second? It would be no discredit to the author to suspect that he found his subject more odious than he hoped, and lost zest for the investigation.