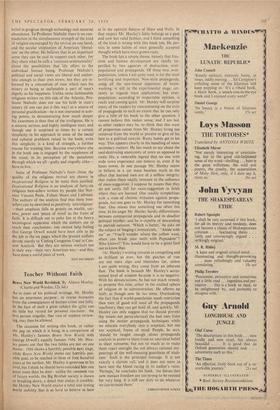 As in most of his political writings, Mr. Huxley has an enormous purpose : to rescue humanity from the consequences of human crime and folly. In the face of such a great subject the tzitic can do little but record his personal reactions: the first person singular, that vice of modern review- ing, may then be allowed.

The occasion for writing this book, or rather the peg on which it is hung, is a comparison of Mr. Huxley's famous Brave New World with George Orwell's .equally famous 1984. Mr. Hux- ley points out that the two fables are not on -one theme: 1984 shows a horribly possible next stage, while Brave New World shows our horribly pos- sible goal, ,to be reached in three or four hundred years at the earliest. Mr. Hugley is generous to his rival, but I think he should have conceded him one point more than he does : unlike the common run of future worlds, the Big Brother society is shown as breaking down, a detail that makes it credible; the Huxley New World enjoys "a total and lasting world stability that is as hard to believe in here

as in the optimist futures of Shaw and Wells. In that respect Mr. Huxley's fable belongs to a past and now less valid fashion, and I think something of the kind is wrong with this book too. He per- sists in some habits of once generally accepted thought which have since grown rusty.

The book has a simple theme, namely that free- dom and human -development are chiefly im- perilled by two agencies of destruction, over- population and propaganda. Of these two, over- population, unless I am quite mad, is far the most terrifying and important. New-style propaganda, using all the new-found apparatus of brain- washing, is still in the experimental stage, cer- tainly as regards mass application, but over- population, according to respectable opinion. is ready and coming quick. Mr. Huxley will surprise many of his readers by concentrating on the evils of propaganda to such an extent that he can only give a fifth of his book to the other question. I cannot believe this makes sense, and 1 am led. as other readers may be, to think that this want of proportion comes from Mr. Huxley living too removed front the world at present to give of his best as a political essayist. Rusty habits get in his way. This appears clearly in his handling of some secondary matters. He has much to say about the soul-destroying anonymity of town as opposed to rustic life, a venerable legend that no one with wide town experience can believe in, even if he hates towns. In one passage Mr. Huxley seems to believe in a yet more baseless myth to the effect that learned men are of a selfless integrity that makes them totally immune to the influence of mass-suggestion. I suppose he means that they do not easily fall for mass-suggestion in fields where they are learned. One readily sympathises with a state -of chronic irritation against propa- ganda, but one goes to Mr. Huxley for something finer. One misses that something too often this time. In his anger Mr. Huxley hardly differentiates between commercial propaganda and its deadlier political brother, and he is capable of descending to peevish sarcasm. 'Which is better,' he asks on the subject of Singing Commercials, ' "Abide with me" or "You'll wonder where the yellow went, when you brush your teeth with Pepsodent"? Who knows?' You would have to be a great fool not to know that.

Mr. Huxley's writing remains as compelling and as brilliant as ever, but the patches of rust are not mere slips and blemishes for, unless I am quite wrong, they come froth an inherent flaw. The book is beneath Mr. Huxley's accus- tomed level of wisdom because it is so negative. With his denunciations, he has not much remedy to propose this time, either in the exalted sphere of religion or in administration. He affirms no faith, as though now he has none. Overlooking the fact that if world-population needs restriction then men of good will need all the propaganda machinery they can get hold of, and quickly, Mr. Huxley can only suggest that we should prevent (by means not particularised) the bad men from using the nastier propaganda techniques while we educate everybody into a sceptical, but not too sceptical, frame of mind. People, he says, 'should be taught enough about propaganda analysis to preserve them from an uncritical belief in sheer nonsense, but not so much as to make them reject outright the not always rational out- pourings of the well-meaning guardians of tradi- tion.' Such is the principal message. It is not exactly a clarion call, and it does not seem to have sent the blood racing in its author's veins. 'Perhaps,' he concludes hiS book, 'the forces that now menace freedom are too strong to be resisted for very long. It is still our duty to do whatever we can to resist them.'