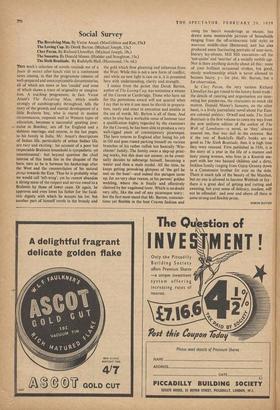 Tim week's selection of novels reminds me of a faute de tnieux after-lunch visit to a convenient news cinema, in that the programme consists of well-prepared and unexceptionable docunientaries, all of which are more or less 'candid' and none of which shows a trace of originality or imagina- • tion. A teaching programme; in fact. Victor Anant's The Revolving Man, which smells strongly of autobiography throughout, tells the story of the growth and mental development of a little Brahmin boy, who is reared in modest circumstances, responds well to Western types of education, becomes a successful sporting jour- , nalist in Bombay, sets off for England and a dubious marriage, and returns, in the last pages, to his family in India. Mr. Anant's descriptions of Indian life, particularly of urban Indian life, are racy and exciting : his account of a poor but respectable Brahmin household is sympathetic yet unsentimental: but beyond question the chief interest of this book lies in the disquiet of the hero, torn as he is between his hankerings after the West and the counterclaims of his natural pietas towards the East. Thus he is probably what we would call 'left-wing'; yet he cannot abandon a strong sense of the respect and service owed to a Brahmin by those of lower caste. Or again, he approves and even loves his father for the fatal- istic dignity with which he accepts his lot; but another part of himself revels in the brandy and

the gold which flow gleaming and infamous from the West. While this is not a new form of conflict, and while no new light is cast on it, it is presented here with understanding, clarity and strength.

I notice from the jacket that Derek Barton, author of The Loving Cup, was sometime a winner of the Craven at Cambridge. Those who have sat for this portentous award will not quarrel when I say that to win it one must be slavish in prepara- tion, ready and exact in execution and nimble in the use of words. Mr. Barton is all of these. And since he also has a workable sense of humour (not a qualification highly regarded by the examiners for the Craven), he has been able to produce a very well-rigged piece of contemporary picaresque. The hero returns to England after losing his job in Oil and goes round parking himself on various branches of his rather relish but basically 'Win- chester' family. The family owns a slap-up print- ing works, but this does not answer, so he event- ually decides to submerge himself, becoming a waiter and then a male model. All the time, he keeps getting provoking glimpses of 'the girl he met on the boat'—and indeed this paragon turns up, for no very clear reason, at his parents' golden wedding, where she is finally and effectively claimed by her vagabond lover. Which is no doubt very silly, like the end of any picaresque story : but the fact must stand that Mr. Barton, conscien- tious yet flexible in the best Craven fashion and using his hero's wanderings as excuse, has drawn some memorable pictures of households ranging from the off-aristocratic (old style) to nouveau middle-class (Battersea), and has also produced some fascinating portraits of near-tarts, literary lay-abouts, Mill Hill executives—all the `not-quites' and `nearlies' of a socially mobile age. Nor is there anything sketchy about all this : none of your brilliant occasional strokes, but good, steady workmanship which is never allowed to become heavy. y— for plot, Mr. Barton, but a for observation.

In Chez Pavan, the very various Richard Llewellyn has got round to the luxury hotel trade : the details of catering and organisation are inter-. esting but ponderous, the characters so much old mutton. Donald Moore's Sumatra, on the other hand, is a lively journalistic novel about Far East- ern colonial politics : Orwell and soda. The Sixth Beatitude is the first volume to come my way from the new uniform edition of the author of The Well of Loneliness—a novel, so 'they' always assured me, that was dull in the extreme. But if the rest of Radclyffe Hall's books are as good as The Sixth Beatitude, then it is high time they were reissued. First published in 1936, it is the story of a year in the life of a mature and lusty young woman, who lives in a Kentish sea- port with her two bastard children and a dirty, feckless family ranging from Gipsy Granny down to a Communist brother for ever on the dole. There is much talk of the beauty of the Marshes, but no one is allowed to become Webbish or fey : there is a great deal of getting and rutting and sweating, but your sense of delicacy, madam, will not be offended : and over and above all there is some strong and flexible prose.