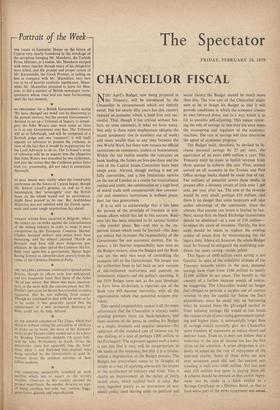 Portrait of the Week— THE TALKS at . Lancaster House on

the future of Cyprus very nearly foundered in the wreckage of the aeroplane bringing Mr. Menderes, the Turkish Prime Minister, to London. Mr. Menderes escaped with minor injuries, though many of his delegation were killed, and the prompt and proper action of Mr. Karamanlis, the Greek Premier, in calling on him in company with Mr. Macmillan, may turn out to be of heavily symbolic significance. Mean- while Mr. Macmillan prepared to leave for Mos- cow, as did a number of British newspaper corre- spondents whose visas had not been forthcoming until the last moment, , NO PRECEDENT for a British Government's saying 'We have changed our mind' can be discovered in the present century, but the present Government's decision to set up a Tribunal of Inquiry to investi- gate the John Waters case must come as close to it as any Government ever has. The Tribunal will sit in Edinburgh, and will be composed of a Scottish judge and two 'assessors'; it will itself appoint an advocate to present the evidence, in view of the fact that it would be inappropriate for the Lord Advocate to do so. The Tribunal's terms of reference will be to inquire into the allegation that John Waters was assaulted by two policemen, and into the action that the Caithness police force took (or, presumably, did not take) in connection therewith.

NO REAL SNAGS were visible when the round-table conference on the future of Cyprus began, though Mr. Selwyn Lloyd's promise, as rash as it was meaningless, that 'sovereignty' over the British bases on the island would not be surrendered, might have proved to be one. But Archbishop Makarios was not satisfied with the Zurich agree- ment and some tough negotiations lay ahead.

VIOLENT SCENES have occurred in Belgium, where the miners are on strike against the rationalisation of the mining industry in order to make it more competitive in the European Common Market. Clashes between strikers and police' have been increasing, and the miners' planned 'March on Brussels' may have still more dangerous pos- sibilities. At the other end of the Common Market, Italy once again has a government, Signor Segni having formed an administration entirely from the ranks of the Christian Democrat Party.

THE INFLUENZA EPIDEMIC continued to spread across Britain, though its effects were less widespread, and less frequently fatal, than those of the Asian 'flu of last winter. But illness was more spectacu- larly in the news with the announcement that Mr. Dulles's operation for hernia has revealed, as many suspected, that he was suffering from cancer. Though he continued to deal with his work as far as he could, it was generally agreed that the appointment of a new permanent Secretary of State could not be long delayed.

TO THE INFINITE CHAGRIN of The Times, which had dived in without taking the precaution of chalking its name on its boots, the story of the diamond- strike in the Thames valley turned out to be a hoax by Reading University students ('A great' lark,' said Sir John Wo]fenden). In South Africa the universities came less agreeably into the head- lines, when it was disclosed that students were being enrolled by the Government as paid in- formers about the political activities of their fellow-students.

THE AMERICANS successfully launched' an earth satellite which was to report on the world's weather. Observers in this country deemed the project superfluous, the weather showing no signs of being anything but cold, wet, sunless, foggy, germ-laden, gloomy and unpredictable.