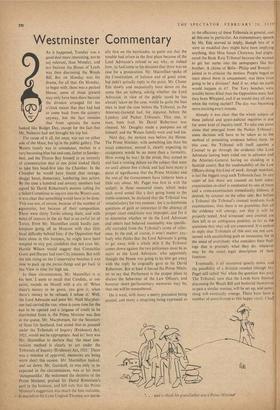 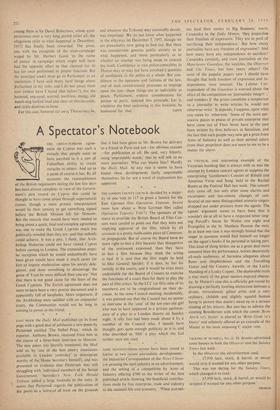 The cause of it all, for once, was not on either side of the Mace, but up in the public gallery. The Waters family was in attendance, mother in a very becoming blue hat and coat, father in Sunday- best, and the Thurso Boy himself in an intensity of concentration that at one point looked likely to take him head-first into the Chamber. In the Chamber he would have found that strange, shaggy beast, democracy, lumbering into action. By the time a hundred and seventy members had signed Sir David Robertson's motion calling for a Select Committee to inquire into the Waters case, it was clear that something would have to be done. This was not, of course, because of the number of signatories, but because of their composition. There were thirty Tories among them, and with Votes of censure in the air that is an awful lot of Tories. Even Mr. Macmillan could hardly con- template going off to Moscow with that little local difficulty behind him; if the Opposition had been alone in this business, he might have been tempted to stay put, confident that not even Mr. Harold Wilson would suggest that Constables Gunn and Harper had vast City interests. But with the tide rising on the Conservative benches it was time to pack up the picnic-things and get back to Sea View in time for high tea.

In these circumstances, Mr. Macmillan is at his best. I seem to recall that Candida, at one point, rounds on Morell with a cry of 'When there's money to be given, you give it; when there's money to be refused, I refuse it.' Well, the Lord Advocate and poor Mr. Niall Macpher- son had carried the can; when it came time for the can to be opened and a largesse of credit to be distributed from it, the Prime Minister was first in the queue. Mr. Macpherson, for the Secretary of State for Scotland, had stated that to proceed under the Tribunals of Inquiry (Evidence) Act, 1921, would not be appropriate. And lo! here was Mr. Macmillan to declare that 'the most con- venient method is clearly to act under the Tribunals of Inquiry (Evidence) Act, 1921.' There was a murmur of approval; memories are being worn short this season. Mr. Macmillan basked, and sat down. Mr. Gaitskell, as was only to be expected in the circumstances, was at his most 'statesmanlike.' He welcomed the decision of the Prime Minister, praised Sir David Robertson's part in the business, and felt sure that the Prime Minister's suggestion was much the best outcome. It was left to Sir Lynn Ungoed-Thomas, not norm- orm- ally first on the barricades, to point out that the trouble had arisen in the first place because of the Lord Advocate's refusal to say why, or indeed how, he had come to his decision that there was no case for a prosecution. Mr. Macmillan 'spoke of the Constitution, of balance and of good sense, but didn't actually reply to the point. Mr. Chuter Ede slowly and majestically bore down on the scene like an iceberg, asking' whether the Lord Advocate, in view of the public stand he has already taken on the case, would be quite the best man to lead the case before the Tribunal, as the Attorney-General had, for instance, before the Lynskcy and Parker Tribunals. That one, at least, bore fruit. Sir David Robertson was cheered, Mr. Doughty made a pompous ass of himself, and the Waters family went and had tea.

Next day, the motion was before the House. The Prime Minister, with something less than his usual coherence, moved it, clearly expecting its acceptance would be no more than a formality. How wrong he was! In the event, they turned to and had a rousing debate on the subject that went on until alniost five o'clock and laid bare .many. point of significance that the Prime Minister and the rest of the Government have hitherto been a little coy about. Mr. Paget was first in with the scalpel; in those measured tones, which make each word sound like a dart going home to the treble-nineteea, he declared that the Tribunal was unsatisfactory for two reasons: for it to determine questions of guilt or innocence in the absence of proper court conditions was improper, and for it to determine whether or no the Lord Advocate and others had behaved reasonably was specific- ally excluded from the Tribunal's terms of refer- ence. In the end, of course, it won't matter; any- body who thinks that the Lord Advocate is going to get away with a whole skin if the Tribunal comes down against the two policemen must be as naive as the Lord Advocate, who. apparently thought the House was going to let him get away with the reply he originally gave to Sir David Robertson. But at least it forced the Prime Minis- ter to say that Parliament is the proper place to discuss the behaviour of the Law Officers, and however short parliamentary memories may be, that one will be remembered.

On it went, with many a merry precedent being quoted, and many a misgiving being expressed as to the efficiency of these Tribunals in general, and of this one in particular. An extraordinary speech by Mr. Ede seemed to imply, though bits of it Si were so muddled they might have been implying anything, that Miss Susan Chataway had engin- eered the Bank Rate Tribunal because she wanted to get her name into the newspapers like her brother. A chime of Bells—Philip and Ronald— joined in to criticise the motion. People began to stare about them in amazement; was there even going to be a division? And if so, what on earth would happen in it? The Tory benches were 0 notably better tilled than the Opposition ones; had they been Whipped, and if so would they all obey when the voting started? The day was becoming more exciting every minute.

Already it was clear that the whole subject of these judicial and quasi-judicial inquiries is due for some kind of inquiry itself. To take one point alone that emerged from the Parker Tribunal : some decision will have to be taken as to the „ method of presenting evidence before them. In this case, the Tribunal will itself appoint a Counsel to go through the evidence (the Lord Advocate having been ruled out in advance and the Attorney-General having no standing in a Scottish court). But the inadvisability of the Law Officers doing this kind of work, though manifest, is not the biggest snag such Tribunals face. In any court of law there are counsel on both sides; examination-in-chief is conducted by one of them and a cross-examination immediately follows, if desired, by counsel on the other side. But before a Tribunal the Tribunal's counsel conducts both. examinations; thus there is no guarantee that all the evidehce will emerge, nor that it will be properly tested. And witnesses' own counsel are then left in an ambiguous position, as far as the questions they may ask are concerned. It is useless to reply that Tribunals of this sort are not con- cerned with establishing guilt or innocence, for in the mind of everybody who considers their find- ings that is precisely what they do, whatever may be the exact legal description of their function.

Eventually, it all simmered quietly down, and the possibility of a division receded (though M r. Paget still called 'No' when the question was put /. The Tribunal, now that the Lords have finished discussing the Weeds Bill and bestirred themselves to pass a similar motion, will beset up, and some- thing will eventually emerge. There have been a number of contributors to this happy result. Chief . . awl lo think 111.1 grand father was a Prime Minister' among them is Sir David Robertson, whose quiet persistence over a very long period (after all, the allegations refer to what happened in December, 1957) has finally been rewarded. The press, too, with the exception of the stunt-campaign waged by Mr. 'Herbert Gunn 'in the name of justice' (a campaign which might well have had the opposite effect to that claimed for it) has for once performed its proper function. But the principal credit must go to Parliament as an institution. I have said many hard things about .Parliament in my time, and I do not unsay them now (where have I heard that before?), but the battered, one-eyed, scarred, toothless, mangy old watch-dog barked loud and clear on this oecasibn, and richly deserves its bone.

For this case, however far away Thurso may be, and whatever the Tribunal may eventually decide, was important. We do not know what happened in the alleyway on December 7, 1957, though we are presumably now going to find out. But there was considerable genuine public anxiety as to what happened, and more particularly as to whether an attempt was being made to conceal the truth". Confidence in two police-constables in Thurso may or may not have involved a question of confidence in the police as a whole. But con- fidence in the openness and fairness of the law, and of such constitutional processes as impinge upon the law—these things are as indivisible as peace. Parliament, without consideration for person or party, restated this principle. Let it, whatever the final reckoning in this business, be