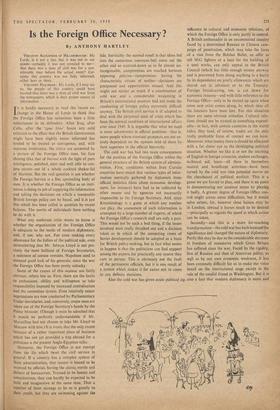 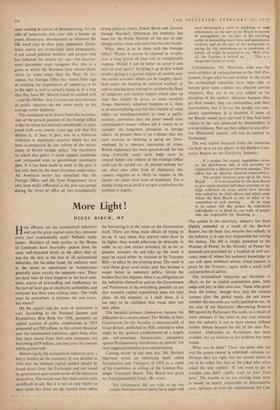 Is the Foreign Office Necessary?

VISCOUNT ALEXANDER OF HILLSBOROUGH: My Lords, is it not a fact that it was not in our minds--certainly it was not revealed to mc- that there was a state of civil war for a con- siderable time before the actual event? Cer- tainly this country was not fully informed, either here or there.. . .

VISCOUNT HAILSHAM : My Lords, if I may say

so, the people of this country could have learned that there was a state of civil war from the newspapers, which is their proper source of

TT is hardly necessary to read this recent ex- ichange in the House of Lords to think that the Foreign Office has sometimes been a little unfortunate in its defenders. After Iraq, after Cuba, after • the `zcme fibre' fiasco any mild criticism to the effect that the British Government might have been slightly better informed has tended to be treated as outrageous, and, with supreme irrelevance, the critics are answered by a picture of the Foreign Office man, his face shining (like that of Jeeves) with the light of pure intelligence, polished, alert and well able to con- jure secrets out of a whole cocktail shaker-ful ' of Martinis. But the real question is not whether the Foreign Service is a fine upstanding body of men. It is whether the Foreign Office as an insti- tution is doing its job of supplying the information and taking the decisions on which a reasonable British foreign policy can be based, and it is just this whioh has been called in question by recent failures. The merits of individuals have nothing to do with it.

What any moderate critic wants to know is whether the organisation of the Foreign Office is adequate to the needs of modern diplomacy, and, if not, why not. For even making every allowance for the follies of the political side, even remembering that Mr. Selwyn Lloyd is not pre- cisely the most brilliant of Foreign Secretaries, a sediment of unease remains. Napoleon used to demand good luck of his generals; since the war the Foreign Office has been pretty unlucky.

Some of the causes of this malaise are fairly obvious; others less so. First, there are the limits to enthusiasm, ability and willingness to take responsibility imposed by increased centralisation and the committee system. Even relatively minor negotiations are now conducted by Parliamentary Under-Secretaries, and, conversely, major ones are taken out of the Foreign Secretary's hands by the Prime Minister. (Though it must be admitted that it would be perfectly understandable if Mr. Macmillan had not chosen to take Mr. Lloyd to Moscow with him.) It is ironic that the only recent instance of a rather important piece of business which has not yet provided a trip abroad for a politician is the present Anglo-Egyptian talks.

Moreover, the Foreign Office is not exempt from the ills •which beset the civil service in general. If a country has a complex system of State administration, that system is bound to be manned by officials having the classic merits and defects of bureaucrats. Trained to be honest and conscientious, they can hardly be expected to be bold and imaginative at the same time. That a number of them manage to be so is greatly to their credit, but they are swimming against the tide. Inevitably the normal result is that ideas fed into the committee conveyor-belt come out the other end so watered-down as to be almost un- recognisable, compromises are reached between opposing policies—compromises having the characteristic virtues of neither—decisions are postponed and opportunities missed. And this might not matter so much if a combination of cold war and a considerable weakening in Britain's international position had not made the conducting of foreign policy extremely difficult anyway. The British civil service is ill adapted to deal with the perpetual state of crisis which has been the normal condition of international affairs ever since 1945. It is arguable that what we need is more adventurers in official positions—that is, more people whose eventual prospects are not en- tirely dependent on the opinion held of them by their superiors iri the official hierarchy.

The cold war has had two main consequences for the position of the Foreign Office within the general structure of the British system of adminis- tration. First, conditions within Iron Curtain countries have meant that various types of infor- mation normally gathered by diplomats from official statistics (data about economic develop- ment, for instance) have had to be collected by other means and by agencies not necessarily responsible to the Foreign Secretary. And, since Kremlinology is a game at which any number can play, the assessment of such information is attempted by a large number of experts, of which the Foreign Office's research staff are only a part. This would not be such a bad thing, if the issues involved were really thrashed out and a decision taken as to which of the competing views of Soviet development should be adopted as a basis for British policy-making, but in fact what seems to happen is that the politicians can find support among the experts for practically any course they care to pursue. This is obviously not the fault of the permanent officials, but it is one result of a system which makes it far easier not to come to any definite, decisions.

Also the cold war has given nificance to cultural and economic relations, of which the Foreign Office is only partly in control. A British ambassador in an uncommitted country faced by a determined Russian or Chinese cam- paign of penetration, which may take the form of a visit from the Bolshoi Ballet, an offer to sell MiG fighters or a loan for the building of a steel works, can only appeal to the British Council (which has little enough money anyway and is prevented from doing anything in a hurry by its dependence on yearly allowances which are shared out in advance) or to the Treasury. Foreign broadcasting, too, is cut down for economic reasons—and with little reference to the Foreign Office—only to be started up again when some new crisis comes along, by which time all the listeners have been lost. For this situation there are some obvious remedies. Cultural rela- tions should not be treated as something expend- able—in fact, with certain countries in the world today they (and, of course, trade) are the only really profitable form of contact we can have. Moreover, what money there is should be allocated with a far closer eye to the developing political situation. Whether we like it or not the teaching of English in foreign countries, student exchanges, technical aid, loans—all these in themselves neutral and beneficent activities—have been turned by the cold war into potential moves on the chessboard of political warfare. This is a game we are forced to play, and there is no point in demonstrating our amateur status by playing it badly. A greater degree of Foreign Office con- trol might create some difficulties, but it would solve others, for, however close liaison may be in London, abroad it leaves much to be desired --principally as regards the speed at which action can be taken.

Secondly—and this is a more far-reaching transformation—the cold war has both lessened the significance and changed the nature of diplomacy. Partly this may be due to the considerable decrease in freedom of manoeuvre which Great Britain has suffered since the war. Faced by the rigidity, 'first of Russian and then of American policy, as well as by our own economic weakness, it has been extremely difficult for us to make our voice heard on the international stage except in the role of the candid friend in Washington. But it is acute political, sig- also a fact that modern diplomacy is more and more coming to consist of demonstrating, for the sake of lookers-on, that your side is keener on peace, democracy, disarmament or whatever the OK word may be than your opponents. Diplo- matic moves are increasingly pure propaganda, if not actual political warfare, and anyone who has followed the history of—say—the disarma- ment discussion must recognise that this is a game at which the Russians have shown them- selves far more adept than the West. So far, indeed, the Foreign Office has shown little sign of realising the importances of appearing to be in the right as well as actually being so. It is true that they have Mr. Selwyn Lloyd to contend with —and Mr. Dulles—but it is also true that exercises in public relations do not come easily to the average career diplomat.

The conclusion to be drawn from this examina- tion of the present position of the Foreign Office is that its status has declined considerably as com- pared with even twenty years ago and that this decline is, at least in part, due to a historical evolution in diplomatic practice which has not been accompanied by any reform of the instru- ments of British foreign policy. The machinery by which that policy is made appears cumbrous and antiquated even as government machinery goes. If it has been made to work in the past, it has only been by the most strenuous endeavours. An American writer has remarked that the Foreign Office and the State Department have only been really influential in thepost-war period during the terms of office of two exceptionally strong political chiefs, Ernest Bevin and General George Marshall. Otherwise the tendency has been for the Prime Minister of the day to take foreign policy more and more into his own hands.

What, then, is to be done with the Foreign Office? Plainly it cannot be allowed to atrophy over a long period of time and at considerable expense. Would it not be better to scrap it and start all over again? To bring it up to date would involve giving it a greater degree of control over the varied activities which can be roughly classi- field under the heading of 'political warfare' as well as making some attempt to cut down the flood of telegrams and routine reports which take up time that should be given to more essential things. Moreover, whatever happens to it, there is an overwhelming case for the creation of some body—an interdepartmental or even a parlia- mentary committee (but the latter would raise constitutional issues)—whose job it would be to consider the long-term prospects in foreign affairs. At present there is no evidence that any such exercise in thinking is going on. Over- whelmed by a constant succession of crises, British diplomacy has been punch-drunk for too long. Certainly some such body must be created before any reform of the Foreign Office itself can be carried out. At present nobody has any clear idea what kind of diplomacy this country requires or is likely 'to require in the future—let alone what kind of diplomats. For a people living on as small a margin as ourselves the problem is urgent.