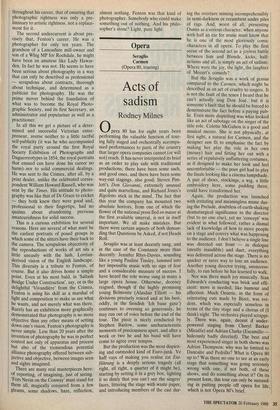 0 pera 80 has for eight years been performing the valuable function of tour- ing fully staged and orchestrally accompa- nied performances to parts of the country that larger opera companies cannot (or will not) reach. It has never interpreted its brief as an order to play safe with traditional productions; there have been some such, and good ones, and there have been some way-out stagings, also good: Steven Pim- lott's Don Giovanni, extremely unusual and quite marvellous, and Richard Jones's Rigoletto stick in the mind. The fact that this year the company has mounted two absolute horrors, from one of which the flower of the national press fled en masse at the first available interval, is not in itself important. We all make mistakes. But there were certain aspects of both deman- ding that Questions be Asked, if not Heads Roll.

Seraglio was at least decently sung, and in the case of the Constanze more than decently: Jennifer Rhys-Davies, sounding like a young Pauline Tinsley, lammed into her impossible music with no sign of fear and a considerable measure of success. I have heard the role worse sung in many a large opera house. Otherwise, decency reigned, though if the highly promising young Belmonte (Alasdair Elliott — his divisions precisely voiced and at his best, oddly, in the fiendish `Ich baue ganz') continues to oversing so generously, he may run out of voice before the end of the tour. The piece is nicely conducted by Stephen Barlow, some uncharacteristic moments of preciousness apart, and after a week or two he and his band will have come to agree over tempos.

But the production was the most dispirit- ing and outmoded kind of Euro-junk. Ve haff vays of making you realise zat Ent- fuhrung is a deeply serious tragedy (all right, all right, a quarter of it might be), starting by setting it in a grey box, lighting it so dimly that you can't see the singers' faces, littering the stage with waste paper, and introducing members of the cast dur- ing the overture miming incomprehensibly in semi-darkness or recumbent under piles of rags. And, worst of all, presenting Osmin as a serious character, when anyone with half an ear for music must know that he is one of the most gloriously comic characters in all opera. To play the first scene of the second act as a joyless battle between him and Blonde, kicks, half- nelsons and all, is simply an act of sadism. Where were the joy, the light, the laughter of Mozart's comedy?

But the Seraglio was a work of genius compared to the Carmen, which might be described as an act of cruelty to singers. It is not the fault of the tenor I heard that he can't actually sing Don Jose, but it is someone's fault that he' should be forced to demonstrate the fact before a paying pub- lic. Even more dispiriting was what looked like an act of sabotage on the singer of the title role. Colette McGahon is a good and musical mezzo. She is not physically, at first sight, a natural for Carmen, and the designer saw fit to emphasise the fact by making her play the role in her own (mousy) hair and fitting her out with a series of repulsively unflattering costumes, as if designed to make her look and feel uncomfortable — the poor girl had to play the finale looking like a cinema lampshade. A pair of shoes, stockings, a wig, a little embroidery here, some padding there, could have transformed her.

Again, the production was launched with irritating and meaningless mime dur- ing the Prelude, doubtless of earth-shaking dramaturgical significance to the director (but to no one else), yet no 'concept' was evident in what followed, rather a dismal lack of knowledge of how to move people on a stage and convey what was happening to the audience. I don't believe a single line was directed out front — in dialogue (mostly inaudible) and duet, everything was delivered across the stage. There is no quicker or surer way to lose an audience. Another young director trying, unsuccess- fully, to run before he has learned to walk.

Nor was there much joy musically. Sian Edwards's conducting was brisk and effi- cient: more is needed, like humour and affection. Much Oeserie, in the form of reinstating cuts made by Bizet, was evi- dent, which was especially senseless in terms of the tiny stage and a chorus of (I think) eight. The orchestra played scrappi- ly. There was, again, decent if under- powered singing from Cheryl Barker (Micaela) and Adrian Clarke (Escamillo hideously badly directed). The best and most experienced singer in both shows was Adrian Thompson: why was he limited to DancaIre and Pedrillo? What is Opera 80 up to? Was there no one to see at an early stage that something was going seriously wrong with one, if not both, of these shows, and do something about it? On its present form, this tour can only be succeed- ing in putting people off opera for life, which is not Opera 80's brief.