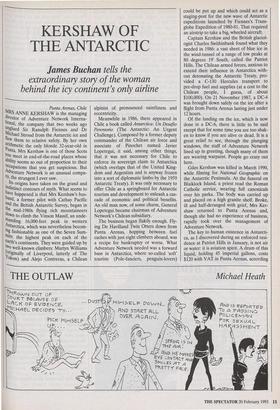 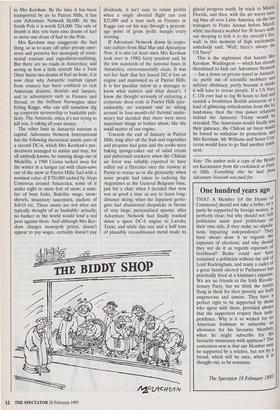 KERSHAW OF THE ANTARCTIC

Punta Arenas, Chile Iv!RS ANNE KERSHAW is the managing d?rector of Adventure Network Interna- tional, the company that two weeks ago unAlued Sir Ranulph Fiennes and Dr Michael Stroud from the Antarctic ice and new them to relative safety. By her own arithmetic the only blonde 32-year-old in Punta, Mrs Kershaw is one of those Scots You meet in end-of-the-road places whose ability seems so out of proportion to their occupations that you get suspicious. But Adventure Network is an unusual compa- 0Y, the strangest I ever saw. Its origins have taken on the grand and Lindistinet contours of myth. What seems to Ikiave happened is that Mrs Kershaw's hus- °and, a former pilot with Cathay Pacific and the British Antarctic Survey, began in ,,tne mid-1980s flying rich mountaineers uolvn to climb the Vinson Massif, an unde- manding 16,000-feet peak in western Antarctica, which was nevertheless becom- ing fashionable as one of the Seven Sum- mits: the highest peak on each of the earth's continents. They were guided up by 11/0 well-known climbers: Martyn Williams (°riginally of Liverpool, latterly of The Yukon) and Alejo Contreras, a Chilean alpinist of pronounced saintliness and eccentricity.

Meanwhile in 1986, there appeared in Chile a book called Antarctica: Un Desafio Perentorio (The Antarctic: An Urgent Challenge). Composed by a former deputy commander of the Chilean air force and associate of Pinochet named Javier Lopetegui, it said, among other things, that it was not necessary for Chile to enforce its sovereign claim to Antarctica (which overlaps that of the United King- dom and Argentina and is anyway frozen into a sort of diplomatic limbo by the 1959 Antarctic Treaty). It was only necessary to offer Chile as a springboard for Antarctic tourism and development to unleash a cas- cade of economic and political benefits. An old man now, of some charm, General Lopetegui became chairman of Adventure Network's Chilean subsidiary.

The business began flakily enough. Fly- ing De Havilland Twin Otters down from Punta Arenas, hopping between fuel caches with just eight climbers aboard, was a recipe for bankruptcy or worse. What Adventure Network needed was a forward base in Antarctica, where so-called 'soft' tourists (Pole-fanciers, penguin-lovers) could be put up and which could act as a staging-post for the new wave of Antarctic expeditions launched by Fiennes's Trans- globe Expedition of 1980-81. That required an airstrip to take a big, wheeled aircraft.

Captain Kershaw and the British glaciol- ogist Charles Swithinbank found what they needed in 1986: a vast sheet of blue ice in the wind-tunnel of a range of low peaks at 80 degrees 19' South, called the Patriot Hills. The Chilean armed forces, anxious to extend their influence in Antarctica with- out detonating the Antarctic Treaty, pro- vided a C-130 Hercules transport to pre-drop fuel and supplies (at a cost to the Chilean people, I guess, of about $100,000). On 21 November 1987, a DC-4 was brought down safely on the ice after a flight from Punta Arenas lasting just under 12 hours.

Of the landing on the ice, which is now done in a DC-6, there is little to be said except that for some time you are too shak- en to know if you are alive or dead. It is a great relief to see, through the plunging windows, the staff of Adventure Network lined up in greeting, though many of them are wearing warpaint. People go crazy out here.

Giles Kershaw was killed in March 1990, while filming for National Geographic on the Antarctic Peninsula. At the funeral on Blaiklock Island, a priest read the Roman Catholic service, wearing full canonicals over his parka. The body was carried up and placed on a high granite shelf. Broke, ill and half-deranged with grief, Mrs Ker- shaw returned to Punta Arenas and, though she had no experience of business, rapidly took over the management of Adventure Network.

The key to human existence in Antarcti- ca, as I discovered during an enforced resi- dence at Patriot Hills in January, is not air or water: it is aviation spirit. A drum of this liquid, holding 45 imperial gallons, costs $120 with VAT in Punta Arenas, according to Mrs Kershaw. By the time it has been transported by air to Patriot Hills, it has cost Adventure Network $6,000. At the South Pole it is worth $24,000. The rule of thumb is this: you burn nine drums of fuel to move one drum of fuel to the Pole.

Mrs Kershaw may exaggerate the fuel thing, so as to scare off other private oper- ators and preserve her monopoly of conti- nental tourism and expedition-outfitting. But there are no roads in Antarctica; and seeing as how a little aircraft like a Twin Otter burns two drums of fuel an hour, it is now clear why Antarctic tourism (apart from cruises) has been confined to rich American doctors, dentists and lawyers, and to adventurers such as Fiennes and Stroud, or the brilliant Norwegian skier Erling Kagge, who can still somehow dig up corporate sponsorship or bankable pub- licity. The Antarctic, when it's not trying to kill you, is taking all your money.

The other limit to Antarctic tourism is capital. Adventure Network International has the following theoretical assets: part of a second DC-6, which Mrs Kershaw's pre- decessors managed to mislay and may, for all anybody knows, be running drugs out of Medellin; a 1980 Cessna tucked away for the winter in a hangar cut with chain-saws out of the snow at Patriot Hills; fuel with a nominal value of $750,000 cached by Alejo Contreras around Antarctica, some of it under eight or more feet of snow; a num- ber of bent forks, Bakelite mugs, snow- shovels, insanitary saucepans, packets of Jell-O etc. These assets are not what are typically thought of as bankable: actually, no banker in the world would lend a red peso against them. And although Mrs Ker- shaw charges monopoly prices, doesn't appear to pay wages, certainly doesn't pay dividends, it isn't easy to retain profits when a single aborted flight can cost $25,000 and a man such as Fiennes or Kagge can eat his way through a percent- age point of gross profit margin every evening.

If Adventure Network draws its corpo- rate culture from Mad Max and Apocalypse Now, it is also (at least since Mrs Kershaw took over in 1990) fairly prudent and, by the low standards of the national bases in Antarctica, environmentally clean. It was not her fault that her leased DC-6 lost an engine and marooned us at Patriot Hills. It is her peculiar talent as a manager to know what matters and what doesn't. I know she thought seriously of enforcing a corporate dress code at Patriot Hills (pre- eminently, no warpaint and no sitting around in four-month-old thermal under- wear) but decided that there were more important things to bother about, like the small matter of our engine.

Towards the end of January at Patriot Hills, long after all the fruit and vegetables and propane had gone and the cooks were baking sponge-cakes out of salad cream and pulverised crackers; when the Chilean air force was reliably reported to have rolled out a Hercules onto the runway at Punta to rescue us or die gloriously; when some people had taken to radioing the Argentines at the General Belgrano base, just for a chat; when I decided that now was as good a time as any to learn long- distance skiing; when the Japanese geolo- gists had abandoned chopsticks in favour of very large, personalised spoons; after Adventure Network had finally tracked down a spare DC-6 engine to , Laredo, Texas; and while this one and a half tons of plausibly reconditioned metal made its

glacial progress south, by truck to Miami, Florida, and then, with the air waves turn- ing blue all over Latin America, on the last transport to Punta Arenas before March; while mechanics worked for 30 hours with- out sleeping to bolt it to the aircraft's fire- wall; in this moment of high excitement, somebody said: 'Well, there's always the US Navy!'

This is the nightmare that haunts Mrs Kershaw. Washington — which has already threatened to kick out Adventure Network

has a down on private travel in Antarcti- ca: partly out of scientific snobbery and military obstinacy, partly because it thinks it will have to rescue people. If a US Navy C-130 ever had to log 80 hours to find and unstick a frostbitten British aristocrat or a load of gibbering orthodontists from the ICY land-mass, then the true power relations behind the Antarctic Treaty would he revealed. The Americans would finally lose their patience, the Chilean air force would be forced to withdraw its protection, and Mrs Kershaw, Mr Williams and Senor Con- treras would have to go find another conti- nent.

Note: The author stole a copy of the Broth: ers Karamazov from the cookshack at Pain' ot Hills. Everything else he had from Adventure Network was paid for.