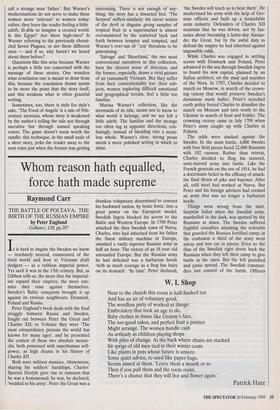 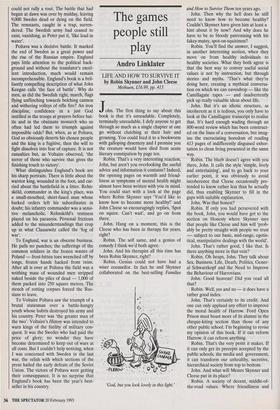 THE BATTLE OF POLTAVA: THE BIRTH OF THE RUSSIAN EMPIRE by Peter Englund Gollancz, £20, pp.287 It is hard to imgine the Sweden we know — resolutely neutral, enamoured of the third world and host to Vietnam draft dodgers — as a ruthless imperial power. Yet such it was in the 17th century. But, as Gibbon tells us, the more that the imperial- ists expand their empires, the more ene- mies they raise against themselves. Sweden's Baltic conquests brought it up against its envious neighbours: Denmark, Poland and Russia.

Peter Englund's book deals with the final struggle between Russia and Sweden, fought out between Peter the Great and Charles XII; to Voltaire they were 'The most extraordinary persons the world has known for many ages', and he presented the contest of these two absolute monar- chs, both possessed with superhuman will- power, as high drama in his History of Charles XII.

Both were military maniacs. Abstemious, sharing his soldiers' hardships, Charles' Spartan lifestyle gave rise to rumours that he was a homosexual; he was, he declared, `wedded to his army'. Peter the Great was a drunken voluptuary determined to convert his backward nation, by brute force, into a great power on the European model. Swedish Ingria blocked his access to the Baltic and Western Europe. In 1700 Peter attacked the then Swedish town of Narva. Charles, who had inherited from his father the finest military machine in Europe, smashed a vastly superior Russian army in half an hour. The victory of an 18 year old astounded Europe. But the Russian army he had defeated was a barbarian horde `with as much courage as a frog has hairs on its stomach'. 'In time', Peter declared, `the Swedes will teach us to beat them'. He modernised his army with the help of Ger- man officers and built up a formidable arms industry. Defenders of Charles XII maintain that he was driven, not by fan- tasies about becoming a latter-day Alexan- der the Great, but by the awful duty to defend the empire he had inherited against impossible odds.

While Charles was engaged in settling scores with Denmark and Poland, Peter advanced to the sea through Swedish Ingria to found his new capital, planned by an Italian architect, on the mud and marshes of the Neva. In 1707, Charles decided to march on Moscow, in search of the crown- ing victory that would preserve Sweden's dominium mans baltici. Peter's scorched earth policy forced Charles to abandon the march on Moscow and turn south to the Ukraine in search of food and fodder. The crowning victory came in July 1709 when Peter's army caught up with Charles at Poltava.

The odds were stacked against the Swedes. In the main battle, 4,000 Swedes with four field pieces faced 22,000 Russians with 102 cannon. Rather than retreat, Charles decided to fling his tattered, semi-starved army into battle. Like the French generals on the eve of 1914, he had a doctrinaire belief in the efficacy of attack: the final thrust of pike and bayonet. After all, cold steel had worked at Narva. But Peter and his foreign advisors had created an army that was no longer a barbarian horde.

Things went wrong from the start. Surprise failed when the Swedish army, marshalled in the dark, was spotted by the Russians at dawn. The Swedes suffered frightful casualties attacking the redoubts that guarded the Russian fortified camp; in the confusion a third of the army went astray and was cut in pieces. Even so the elan of the Swedish right drove back the Russians when they left their camp to give battle in the open. But the left panicked and panic spread. The Swedish comman- ders lost control of the battle. Officers

Near to the church this room is half-hushed too And has an air of voluntary good, The wordless piety of worked-at things: Embroidery that took an age to do, Baby clothes in tissue like Granny's face, The too-good cakes, and perfect fruit a painter Might arrange. The women handle cash As artlessly as children playing shops With piles of change. At the back where chairs are stacked Sit sprigs of old men tied in their winter coats Like plants in pots whose future is unsure.

Some quiet advice, re-used like paper bags, Seems aimed at them. 'Leave them a month or so Then if you pull them and the roots resist, There's a chance that they will live and flower again.' could not rally a rout. The battle that had begun at dawn was over by midday, leaving 9,000 Swedes dead or dying on the field. The remnants, caught in a trap, surren- dered. The Swedish army had ceased to exist, vanishing, as Peter put it, 'like lead in water'.

Poltava was a decisive battle. It marked the end of Sweden as a great power and the rise of the Russian empire. Englund pays little attention to the political back- ground and without the translator's excel- lent introduction, much would remain incomprehensible. Englund's book is a bril- liantly compelling description of what John Keegan calls 'the face of battle'. Why do men, as did the Swedish right, march, flags flying unflinching towards belching cannon and withering volleys of rifle fire? An iron discipline, confidence in a just God instilled in the troops at prayers before bat- tle and in the obstinate monarch who so often had led them to triumph against impossible odds? But, when, as at Poltava, God so obviously deserts his chosen people and the king is a fugitive, then the will to fight dissolves into fear of capture. It is not casualties but, as Voltaire observed, 'the terror of those who survive that gives the finishing touch to victory'.

What distinguishes Englund's book are his sharp portraits. There is little about the warrior king, wounded in the foot, and car- ried about the battlefield in a litter. Rehn- skald, commander in the king's place, was a small-mouthed, short-fused man whose barked orders left his subordinates in doubt; his infantry commander was a sensi- tive melancholic. RehnskOld's testiness played on his paranoia. Personal frictions added to the misunderstandings that crop up in what Clausewitz called the log of war'.

To Englund, war is an obscene business. He pulls no punches; the sufferings of the common soldiers in the frozen wastes of Poland — frost-bitten toes wrenched off by tongs, frozen hands hacked from reins. After all is over at Poltava the field was a writhing mass of wounded men stripped naked beside the piles of dead — 1,000 of them packed into 250 square metres. The stench of rotting corpses forced the Rus- sians to leave.

To Voltaire Poltava saw the triumph of a brutal statesman over a battle-hungry youth whose hubris destroyed his army and his country. Peter was 'the greater man of the two'. Voltaire's History was intended to warn kings of the futility of military con- quest. It was the Swedes who had paid the price of glory; no wonder they have become determined to keep out of wars at all costs. But I couldn't help noticing, when I was concerned with Sweden in the last war, the relish with which sections of the press hailed the early defeats of the Soviet Union. The victors of Poltava were getting their comeuppance, It is no surprise that Englund's book has been the year's best- seller in his country.