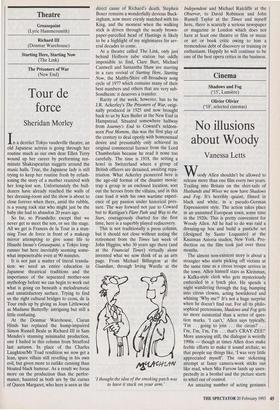 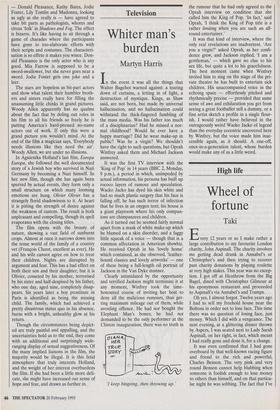 No illusions about Woody

Woody Allen shouldn't be allowed to release more than one film every two years. Trailing into Britain on the shirt-tails of Husbands and Wives we now have Shadows and Fog. It's horribly quaint, filmed in black and white, in a pseudo-German Expressionist style. The action takes place in an unnamed European town, some time in the 1920s. This is pretty convenient for Woody Allen. All he had to do was raid a dressing-up box and build a pastiche set (designed by Santo Loquasto) at the Kauiman Astoria studios, New York. Pro- duction on the film took just over three months.

The almost non-existent story is about a strangler who starts picking off victims at the same time as a circus troupe arrives in the town. Allen himself stars as Kleinman, a Kafka-style clerk who gets mysteriously embroiled in a lynch plot. He spends a night wandering through the fog, bumping into circus clowns, acting bewildered and whining 'Why me?' It's not a huge surprise when he doesn't find out. For all its philo- sophical pretensions, Shadows and Fog gets no more existential than a series of ques- tion marks. 'I can't,' Allen says typically, `I'm . . . going to join . . . the circus? . . . I'm, I'm, I'm, I'm . . . that's CRAY-ZEE!' More annoying still, the dialogue is weirdly 1990s — though at times Allen does make feeble efforts to make it sound archaic, so that people say things like, 'I was very little appreciated myself. The one sickening attempt at fancy camera-work sticks out like mad, when Mia Farrow lands up unex- pectedly in a brothel and the picture starts to whirl out of control.

An amazing number of acting geniuses — Donald Pleasance, Kathy Bates, Jodie Foster, Lily Tomlin and Madonna, looking as ugly as she really is — have agreed to take bit parts as pathologists, whores and circus 'folk' in Shadows and Fog. The effect is bizarre. It's like having to sit through a game of charades where the participants have gone to too-elaborate efforts with their scripts and costumes. The characteri- sation is so effete it makes you wince. Don- ald Pleasance is the only actor who is any good. Mia Farrow is supposed to be a sword-swallower, but she never goes near a sword. Jodie Foster gets one joke and a leer.

The stars are hopeless as bit-part actors and show what talent their humbler broth- ers and sisters really have for filling the unassuming little chinks in grand pictures. Woody Allen apparently has no qualms about the fact that by doling out roles in his film to all his friends so freely he is putting America's hard-pressed no-name actors out of work. If only this were a grand picture you wouldn't mind. At the end of the film a magician says, 'Everybody needs illusions like they need the air'. Woody Allen, we are under no illusions.

In Agnieszka Holland's last film, Europa Europa, she followed the well documented story of a Jewish boy who survived in Nazi Germany by becoming a Nazi himself. In her new film, though she has again been spurred by actual events, they form only a small structure on which many looming emotions are hung. Olivier Olivier has a strangely florid shadowiness to it. At heart it is pitting the strength of desire against the weakness of custom. The result is both unpleasant and compelling, though its spell evaporates with the closing titles.

The film opens with the beauty of nature, showing a vast field of sunburnt crops. Almost at once it narrows down into the tense world of the family of a country vet (Francois Cluzot, excellent as ever). He and his wife cannot agree on how to treat their children. Nights are disrupted by argument and fear. This has a bad effect on both their son and their daughter; but it is Olivier, cosseted by his mother, terrorised by his sister and half-despised by his father, who one day, aged nine, completely disap- pears. Six years later a boy prostitute in Paris is identified as being the missing child. The family, which had achieved a pretty disastrous status quo in his absence, burns with a bright, unhealthy glow at his return.

Though the circumstances being depict- ed are truly painful and appalling, and the uncertainties hold us to the end, they come with an additional and surprisingly wide- ranging display of sexual suggestiveness. Of the many implied liaisons in the film, the majority would be illegal. It is this fetid atmosphere that truly interests Holland, and the weight of her interest overburdens the film. If she had been a little more deli- cate, she might have increased our sense of hope and fear, and drawn us further in.