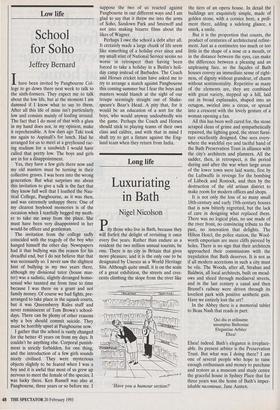 Ihave been invited by Pangbourne Col- lege to go down there next week to talk to the sixth-formers. They expect me to talk about the low life, but at the moment I am damned if I know what to say to them. After all this life of mine isn't particularly low and consists mainly of loafing around. The fact that I do most of that with a glass in my hand does not, in my opinion, make it reprehensible. A few days ago Taki took me again to Aspinall's for lunch. Had he arranged for us to meet at a greyhound rac- ing stadium for a sandwich I would have called that pretty low. The boys and girls are in for a disappointment.

Yes, they have a few girls there now and my old masters must be turning in their collective graves. I was born into the wrong generation. But what surprises me about this invitation to give a talk is the fact that they know full well that I loathed the Nau- tical College, Pangbourne, as it was then, and was extremely unhappy there. One of my clearest boyhood memories is of the occasion when I tearfully begged my moth- er to take me away from the place. She must have been very disappointed in her would-be officer and gentleman.

The invitation from the college sadly coincided with the tragedy of the boy who hanged himself the other day. Newspapers had it that bullying was the reason for his dreadful end, but I do not believe that that was necessarily so. I never saw the slightest hint of bullying in my two years there, although my divisional tutor (house mas- ter) was a sadistic, slightly deranged homo- sexual who taunted me from time to time because I was there on a grant and not family money. Of course we had fights, pre- arranged to take place in the squash courts, but it was Queensberry Rules stuff and never reminiscent of Tom Brown's school- days. There can be plenty of other reasons why a boy should commit suicide. They must be horribly upset at Pangbourne now.

I gather that the school is vastly changed for the better 45 years on from my days. It couldn't be anything else. Corporal punish- ment is strictly forbidden, for one thing, and the introduction of a few girls sounds nicely civilised. They were mysterious objects slightly to be feared when I was a boy and it is awful that most of us grew up nervous to meet the female of the species. I was lucky there. Ken Russell was also at Pangbourne, three years or so before me. I suppose the two of us reacted against Pangbourne in our different ways and I am glad to say that it threw me into the arms of Soho, Sandown Park and Smirnoff and not into making bizarre films about the likes of Wagner.

Perhaps I owe the school a debt after all. It certainly made a large chunk of life seem like something of a holiday ever since and my small stint of National Service seems no worse in retrospect than having been forced to take a holiday in a Butlin's holi- day camp instead of Barbados. The Coach and Horses cricket team have asked me to try to arrange a match against Pangbourne this coming summer but I fear the boys and masters would blanch at the sight of our troupe seemingly straight out of Shake- speare's Boar's Head. A pity that, for it would be an education of a sort for the boys, who would anyway undoubtedly win the game. Perhaps the Coach and Horses should stick to playing teams of their own class and calibre, and with that in mind I shall try to get a fixture against the Eng- land team when they return from India.