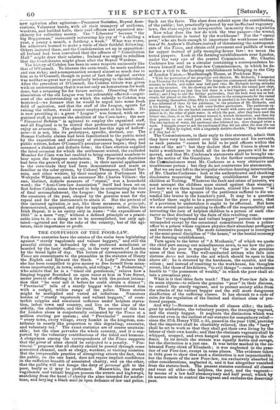 THE CONFUSION OF THE POOR-LAW.

And why ?—Because it confounds all classes alike ; the indi- gent by misfortune, the voluntary pauper, the tramping vagrant, and the sturdy beggar. It neglects the distinction which was observed even in the earliest of our statutes for compulsory relief— since the 27th Henry VIII. 0.25, passed in the year 1536, provides that the impotent shall be charitably relieved, that the " lusty " shall be set to work so that they shall get their own living by the labour of their own hands; and that the obstinate vagrants shall be whipped, cropped, and even hanged upon persevering in the of- fence. In its details the statute was equally feeble and savage,•

but the distinction is a just one. It was better marked in the ce- lebrated Forty-third of Elizabeth ; it was neglected in the prac- tice of our Poor-law, except in some places. The evidence taken in 1834 goes to show that such a distinction is not impracticable ; but the framers of the new Poor-law, too exclusively absorbed in

other considerations, neglected it, and it has altogether vanished from the statute-book. The present statutes confound all classes and treat all alike—the helpless, the poor, and the vagrant— by means of a law half eleemosynary and half penal, which by its nature omits to control the vagrant and excludes the deserving ,! poor.