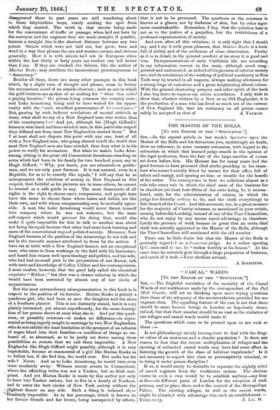 THE MASTER OF THE ROLLS.

[To THE EDITOR OF THE " SPECTATOR."] SIR,—In the capital article in last week's Spectator upon the Master of the Rolls and his detractors you, unwittingly no doubt, drew an inference, in some measure erroneous, with regard to the estimation in which that learned judge stands in the opinion of the legal profession, from the fact of the large number of causes set down before him. His Honour has for many years had the good fortune to have procured chief clerks presiding in his cham- bers who seeme I exactly fitted by nature for their office, full of talent and energy, and sparing no thus or trouble for the benefit of the suitor. The consequence is that we solicitors almost as a rule take every suit in which the chief onus of the business lies in chambers (at least four-fifths of the suits being, be it remem- bered, suits for the administration of estates, in which the judge has literally nothing to do, and the clerk everything) to this branch of the Court. And this accounts, too, in a great measure for the majority of Charity schemes, as mentioned in your article, coming before his Lordship, instead of one of the Vice-Chancellors, who do not enjoy by any means equal advantage in chambers. Lately the pressure of work became so great that an extra chief clerk was actually appointed to the Master of the Rolls, although the Vice-Chancellors still continued with the old number.

There can be little doubt but that the Master of the Rolls is generally regarded as a dengerous judge. As a rather sporting Q.C. once said to me, he " rushes terribly at his fences." At the same time he certainly gets through a large proportion of business, and much of it well.—Your obedient servant,