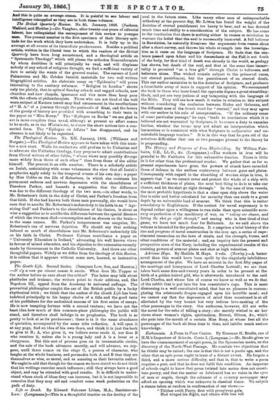 The Theological Review. No. XII. January, 1866. (Williams and Worgate.)—The

Theologie.al Review appears to have taken with this num- ber a new start. While its gond:Lamm still profess to be Unitarian and to advocate the Unitarian theology, they propose to admit contributions from liberal writers of other faiths, " whose views may possibly diverge more widely from those of each other " than from those of the editor himself. The present is an able number. There is a scholarly article on Pminh, maintaining with some vehemence the view that all Isaiah'a prophecies apply solely to the temporal events of his own day; a paper by Miss Cobbe on the life of Robertson, in which she contrasts his permanent sadness and nervous depression with the cheerfulness of Theodore Parker, and hazards a suggestion that the difference was due to the different theology of the two men, in other words, to Mr. Robertson's faith in the deity of Christ, and Parker's freedom from that faith. If she had known both these men personally, she would have seen that to ascribe Mr. Robertson's melancholy to his faith in an " Ago- nizing God" and Parker's to the cheerfulness of his theism, is about as wise a suggestion as to ascribe the difference between the special diseases of which the two mon died—consumption and an abscess on the brain— to the same causes. Mr. Parker's temperament was sanguine, Mr. Robertson's one of nervous dejection. We should say that nothing infused so much of cheerfulness into Mr. Robertson's melancholy life as his faith in Christ. Professor Cairnes contributes a paper on " University Education in Ireland," advocating his well known views in favour of mixed education, and his objection to the concession recently made by Government to the Catholic University. And there are other thoughtful papers. Widely as we differ from the theology of this Review, it is seldom that it appears without some new, learned, or instructive paper.