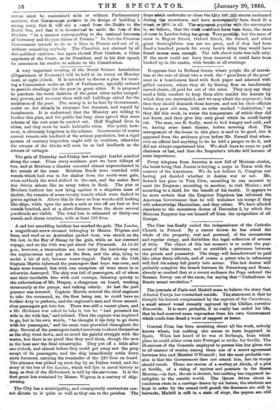 Page 2, 20 January 1866 — Every telegram from America is now full of Mexican stories,
Close

Every telegram from America is now full of Mexican stories,

the latest being that Juarez is levying a corps in Texas with the consent of the Americans. We do not believe it, Congress not having yet decided whether it desires war or not. Mr. Seward has gone to Vera Cruz, according to one account to meet the Empress ; according to another, to visit Mexico ; and according to a third, for the benefit of his health. It appears to be more certain that the Emperor Napoleon has informed the American Government that he will withdraw his troops if they will acknowledge Maximilian, and they refuse. We have alluded elsewhere to the monstrous decree of December 5, by which the Mexican Emperor has out himself off from the sympathies of all Europe.