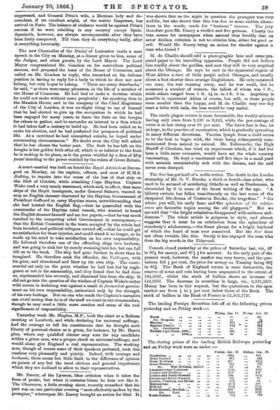 Yesterday week Mr. Hughes, M.P., took the chair at a

Reform .meeting at Lambeth, and while declaring for universal suffrage, had the courage to tell his constituents that he thought such liberty of personal choice as is given, for instance, by Mr. Hare's plan, where any qualified elector may vote for any candidate within a given area, was a proper check on universal suffrage, and would alone- give England a real representation. The working men, though of course some of their speakers protested, took this candour very pleasantly and quietly. Indeed, with courage and bonhomie, there seems but little limit to the difference of opinion on points of any but the most obvious and general importance which they are inclined to allow to their representatives.