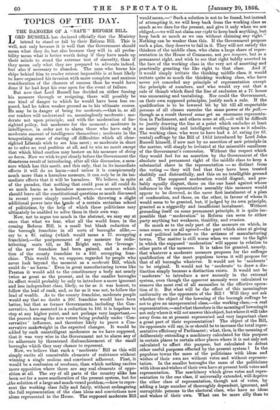 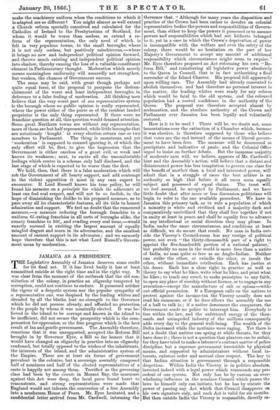 THE DANGERS OF A " SAFE " REFORM BILL. LORD RUSSELL has declared officially that the Ministry intend to stand or fall by their Reform Bill. This is well, not only because it is well that the Government should mean what they do, but also because they will in all proba- bility mean what is better worth doing if they have made up their minds to stand the extreme test of sincerity, than if they mean only what they are prepared to advocate indeed, but also if necessary to abandon. The man who burns his ships behind him to render retreat impossible is at least likely to have organized his invasion with more complete and anxious consideration of the chances of success than he would have done if he had kept his rear open for the event of failure.

But now that Lord Russell has decided on either forcing his measure through or resigning, there will possibly be one kind of danger to which he would have been less ex- posed, had he taken weaker ground as to his ultimate course. He may be in danger of being too moderate,--that is, as all our readers will understand us, meaninglessly moderate ; mo- derate not upon principle, and with the moderation of far- sighted policy, but moderate for the moment ; moderate in intelligence, in order not to alarm those who have only a moderate amount of intelligence themselves ; moderate in the temporizing sense of staving off difficulties which all clear- sighted Liberals wish to see him meet ; so moderate in short as to solve no real problem at all, and to win no merit except that which blind caution may bestow on his measure of doing no harm. Now we wish to put clearly before the Government the disastrous result of introducing, after all this discussion, a mea- sure which has this merit, and this only, that in its immediate effects it will do no harm—and unless it is conspicuously much more than a harmless measure, it can only be in its im- mediate effects that it will be harmless. We believe, in spite of the paradox, that nothing that could pass at all could do so much harm as a harmless measure,—a measure which should leave all the constitutional questions so much discussed in recent years simply unsolved, while throwing a slight additional power into the loads of a certain sectarian school of politicians, by the help of which these politicians may ultimately be enabled to solve them in their own way.

Now, not to argue too much in the abstract, we may say at once that what we fear, what all the world fears, in the coming Reform Bill, is a small but blank reduction of the borough franchise in all sorts of boroughs alike,— say to a 61. rating (which would mean a 71. occupying franchise),—the postponement of any measure for redis- tributing seats till, as Mr. Bright says, the leverage ' of the new franchise had been gained, and a reduc- tion of the county franchise to a 101. occupying fran- chise. This would be, we suppose, regarded by people who never look beyond the moment as a moderate Bill, which could do no harm.' Even in great manufacturing towns like Preston it would add to the constituency a body not nearly twice as great as the present, and in the smaller boroughs its effect would probably be only to introduce a more ignorant and less independent class, likely, so far as it was honest, to follow the lead of rank, and, so far as it was not, to follow the lead of wealth. As to the county franchise, moderate people would say that no doubt a 201. franchise would have been better, but that as former Governments, including the Con- servative, have assented to a reduction to 101. it is hopeless to stop at any higher point, and not perhaps very important,— the poorest among the new voters being probably under Con- servative ' influence, and therefore likely to prove a Con- servative makeiVeight in the expected changes. It would be added by such unintelligent moderates as we have supposed, that it was very wise in the Government not to alarm any of its adherents by threatened disfranchisement of the small boroughs which they may chance to represent.

The same may be said, with great though perhaps not quite equal force, of the proposal to postpone the disfran- chisement of the worst and least independent boroughs, in deference to a false feeling of moderation. All thinking men believe that the very worst part of our representative system is the borough where no public opinion is really represented, where the power either of the purse or of the resident landed proprietor is the only thing represented. If there were no franchise question at all, this question would demand attention. Some great Northern towns are without any representation, more of them are but half represented, while little boroughs that are notoriously bought ' at every election return one or two members to Parliament. The thing is monstrous, and yet `moderation' is supposed to counsel ignoring it, of which the only effect will be, first, to give the impression that the Government is either careless of a great evil, or weak and knows its weakness ; next, to excite all the uncomfortable feelings which centre in a scheme only half disclosed, and the last stage of which is expected to be worse than the first.

We hold, then, that there is a false moderation which will rob the Government of all hearty support, and add contempt to the violent opposition it must in any case expect to encounter. If Lord Russell knows his true policy, he will found his measure on a principle for which its adherents at least can feel real respect, and will not be so foolish, in the hope of diminishing the dislike to his proposed measure, as to pare away all its characteristic features, all its title to honest admiration and support. We feel no doubt that the rumoured measure,—a measure reducing the borough franchise to a uniform 61.-rating franchise in all sorts of boroughs alike, the county franchise to 101„ and evading every real issue,—would exactly succeed in exciting the largest amount of equally mingled disgust and scorn in its adversaries, and the smallest amount of earnest support in its advocates ; and we earnestly hope therefore that this is not what Lord Russell's Govern- ment mean by moderation.