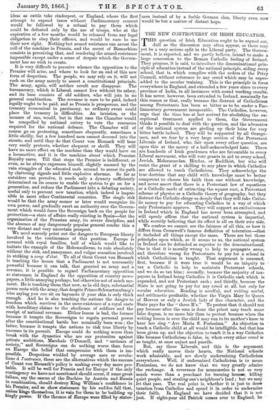 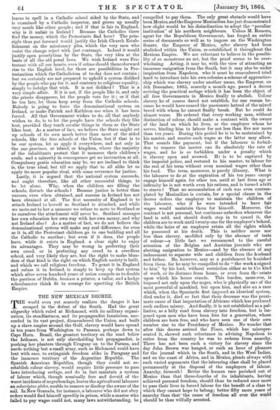 THE NEW CONTROVERSY ON IRISH EDUCATION.

THIS question of Irish Education ought to be argued out, dull as the discussion may often appear, or there may yet be a very serious split in the Liberal party. The Govern- ment, it is reported, and we partly believe, intend to make a large concession to the Roman Catholic feeling of Ireland.

They propose, it is said, to introduce the denominational prin- ciple of education instead of the national principle, aiding every school, that is, which complies with the orders of the Privy Council, without reference to any creed which may be super- added to the secular training. This is the principle in force everywhere in England, and extended a few years since to every province of India, in all instances with sound working results. It has never, however, been extended to Ireland, nominally for this reason or that, really because the distrust of Catholicism among Protestants has been so bitter as to be under a Par- • liamentary government insuperable. The Catholics, however, urge that the time has at last arrived for abolishing the ex- ceptional treatment applied to them, the Government thinks it possible to deal with the question, and the advocates of the national system are girding up their loins for very bitter battle indeed. They will be supported by all Orange- men, and we fear by a very large section of the Protestant Liberals of Ireland, who, fair upon every other question, are upon this at the mercy of a half-acknowledged hate. There are hundreds of Irish gentlemen who are favourable to every Liberal movement, who will vote grants in aid to every school, ' Jewish, Mohammedan, Hindoo, or Buddhist, but who will resist the grant of a shilling to any place in which Catholics are allowed to teach Catholicism. They acknowledge the true doctrine that any child with knowledge must be better competent to choose his faith than one without knowledge, and never assert that there is a Protestant law of equations or a Catholic mode of extracting the square root, a Protestant scheme of physics or a Catholic theory of geography, but they distrust the Catholic clergy so deeply that they will take Catho- lic money to pay for educating Catholics in a way of which only Protestants approve. They will support an exclusiveness in Ireland which in England has never been attempted, and will openly affirm that the national system is impartial, while secretly believing that its effect is all on their own side.

We confess we cannot see the fairness of all this, or how it • differs from Cromwell's famous definition of toleration—that it included all things except the mass. There are but three principles upon which, as it seems to us, the national system in Ireland can be defended as superior to the denominational. One is that it is morally wrong to help to propagate error, and therefore wrong for Protestants to pay for a school in which Catholicism is taught. That argument is unsound, first, because if it were true it would be an iniquity to tax a Catholic to help to maintain Protestant schools, and we do so tax him ; secondly, because the majority of tax- payers in Ireland being Catholics it is Catholic cash which is expended, and not Protestant cash ; and thirdly, because the State is not going to pay for any creed at all, but only for secular education. Reading is needful, and writing useful, and arithmetic profitable, whether the Virgin Mary be Queen of Heaven or only a Jewish lady of fine character, and the State pays for the " three R's." To protest that it should not pay because after the sum is done the priest may teach some false dogma, is no more fair than to protest because when the ' writing lesson is over the child may run to its mother's knee to hear her sing "Ave Maria S. Purissima." An objection to teach a Catholic child at all would be intelligible, but that has • been given up, and the objection to teach it in a -way Catholics like because Catholicism is false, is, when every other creed is so taught, at once unjust and puerile. But, say these Liberals, and this is the argument which really moves their hearts, the National schools work admirably, and are slowly undermining Catholicism everywhere. Well, if undermined Catholicism is to mean Fenianism, we do not know that we very greatly admire the exchange. A reverence for mummeries is not so very much worse than a penchant for burning bottom, killing quiet people, and stealing one's neighbour's land ; but we may let that pass. The real point is, whether it is just to draw taxation from Catholics and spend it in order to undermine their faith. ill England we have decided that it is not just. If eight-year old Patrick comes over to England, he ' learns to spell in a Catholic school aided by the State, and is examined by a Catholic inspector, and grows up usually very much like other people ; and if that is fair in England, why is it unfair in Ireland ? Because the Catholics there find the money, which the Protestants find here? The prin- ciple thus put forward would justify the Irish Church Estab- lishment on the missionary plea, which the very men who resist the change reject with just contempt. Indeed it would justify open proselytism by the State, the very idea at the basis of all the old penal laws. We wish Ireland were Pro- testant with all our hearts, even if crime should thenceforward rise to the English level, for there are possibilities in Pro- testantism which the Catholicism of to-day does not contain ; but we certainly are not prepared to uphold a system disliked by the people who pay for it, and contrary to religious equality, simply to indulge that wish. It is not disliked ? That is a very simple affair. If it is not, if the people like it, and only the priests disapprove, let the people vote for it ; or if that be too late, let them keep away from the Catholic schools. Nobody is going to force the denominational system on Ireland, or make Patrick and Kathleen use when it has been forced. All that Government wishes to do, all that anybody wishes to do, is to let the people have the schools they like best, provided they teach secular things in them as the State likes best. As a matter of fact, we believe the State might set up schools of its own much better than most of the aided schools, like the free schools of the Union, but if that is to be our system, let us apply it everywhere, and not only in the one province, or island, or kingdom, where the majority of the inhabitants protest that it menaces their children's souls, and a minority in consequence get no instruction at all. Compulsory gratis education may be, we are inclined to think is, the true ideal, but till we apply that to all alike let us apply its more popular rival, with some reverence for justice.

Lastly, it is argued that the national system succeeds, and ought therefore, like all other successful things, to be let alone. Why, when the children are filling the schools, disturb the schools 1 Because justice is better than success, even when obtained, and success in Ireland has not been obtained at all. The first necessity of England is to attach Ireland to herself as Scotland is attached, and while we mete out to her a measure we refuse to mete to Scotland or to ourselves the attachment will never be. Scotland manages her own education her own way with her own money, and why not Ireland also ? As a matter of fact, we do not believe the denominational system will make any real difference, for even as it is, all the Protestant children go to one building and all the Catholic to another ; but even if it does, the people have, while it exists in England, a clear right to enjoy its advantages. They may be wrong in preferring their own creed, or in preferring any creed to a creedless school, and very likely they are, but the right to make blun- ders of that kind is the right on which English society is built, and which we call religious freedom. To grant it in England and refuse it in Ireland, is simply to keep up that system which after seven hundred years of union compels us to double the garrison of Dublin, because a printer, a tailor, and a hedge schoolmaster think fit to arrange for upsetting the British Empire.