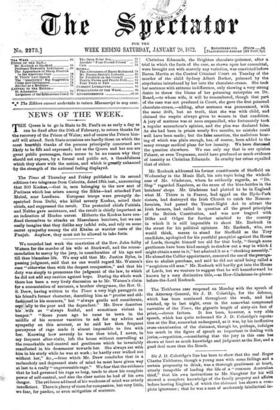 Page 1, 20 January 1872 — Christina Edmunds, the Brighton chocolate-poisoner, after a trial in which
Close

Christina Edmunds, the Brighton chocolate-poisoner, after a trial in which

the facts of the case, as shown upon her committal, were brought out with scarcely any variation, was convicted before Baron Martin at the Central Criminal Court on Tuesday of the murder of the child Sydney Albert Barker, poisoned by the strychnine introduced by her into the chocolate-cream. She took her sentence with extreme indifference, only showing a very strong desire to throw the blame of her poisoning enterprise on Dr. Beard,—to whose wife, it will be remembered, though that part of the case was not produced in Court, she gave the first poisoned chocolate-cream,—adding, after sentence was pronounced, with the same drift, but no truth, that she was with child, and claimed the respite always given to women in that condition. A jury of matrons was at once empanelled, who fortunately took a regular accoucheur's opinion, and the plea was declared false. As she had been in prison nearly five mouths, no mistake could well have been made ; but the false assertion, the malicious bear- ing of which was plain enough, has, of course, been added to the many strange medical pleas for her insanity. We have discussed the question elsewhere. We can only say that in our opinion Palmer, or even Tropmann, could have produced as much evidence of insanity as Christina Edmunds. In cruelty her crime equalled that of either.