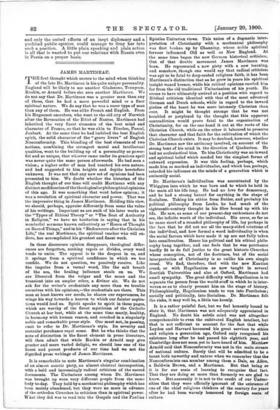 THE first thought which occurs to the mind when thinking of the late Dr. Martineau is his quite unique personality. England will be likely to see another Gladstone, Tennyson, Ruskin, or Arnold before she sees another Martineau. We do not say that Dr. Martineau was a greater man than any of these, that he had a more powerful mind or a finer spiritual nature. We do say that he was a rarer type of man than any of them. He was alike French and English. From his Huguenot ancestors, who went to the old city of Norwich after the Revocation of the Edict of Nantes, Martineau had inherited the very finest elements of the best mind and character of France, so that he was akin to FeneIon, Pascal, Joubert. At the same time he had imbibed the best English spirit, the solid character of the "grave livers" of English Nonconformity. This blending of the beet elements of two nations, combining the strongest moral and intellectual qualities, went to the building up of a personality so power- ful and so unique, that whoever came under its gracious spell was never quite the same person afterwards. He had seen a vision ; a higher order of man had touched his own nature, and had suggested to him heights and depths heretofore unknown. It was not that any new set of opinions had been presented to him. We doubt whether the historian of the English thought of our time will credit Martineau with any distinct modification of the theological or philosophical opinions of this age. It was something that went below opinion; it was a revelation of spiritual character and power. That was the impressive thing in James Martineau. Holding this view, we should, perhaps, appraise differently from some the value of his writings. Important as are such of his later works as the "Types of Ethical Theory" or "The Seat of Authority in Religion," we have no hesitation in saying that in his wonderful sermons known collectively as "Hours of Thought on Sacred Things," and in his "Endeavours after the Christian Life," the real Martineau, the spiritual teacher who will en- dure, has accomplished his greatest and finest work.

In these discourses opinion disappears, theological differ- ences are forgotten, nothing repels or divides, every word tends to unite. The appeal is to the deepest in us, and it springs from a spiritual confidence in which we too confide. We do not question, we passively receive. Like the impulse from a vernal wood, like the salt breath of the sea, the healing influence steals on us. We are liberated from the vulgar and the mean and the transient into an ampler ether, a diviner air. We do not ask for the writer's credentials any more than we trouble ourselves with his opinions,—the credentials are there. This man at least knows our needs, he shares our experiences, he wings his way towards a heaven to which our fainter aspira- tions would lead us. Spirit speaks to spirit in these pages, which are worthy of the finest mysticism of the Catholic Church at her best, while at the same time manly, healthy, in harmony with human reason, and couched in a singularly noble and remarkable prose style. One must not, in passing, omit to refer to Dr. Martineau's style. Its severity and restraint perchance repel some. But he who thinks that the note of distinction is the finest element in prose literature, will then admit that while Ruskin or Arnold may give greater and more varied delight, we should lose one of the finest and purest products of our time had we not the dignified prose writings of James Martineau.

It is remarkable to note Martineau's singular combination of an almost ascetic piety, an almost cloistral introspection, with a bold and increasingly radical criticism of the sacred documents. The Unitarians among whom Dr. Martineau was brought up were very different people from the same body to-day. They held by a mechanicai philosophy which has been mainly abandoned, but they were no more in advance 5f the orthodox Churches in criticism than in spiritual power. What they did was to read into the Gospels and the Pauline Epistles Unitarian views. This union of a dogmatic inter- pretation of Christianity with a mechanical philosophy was first broken up by °banning, whose noble spiritual fervour influenced Old as well as New England. At the same time began the new German historical criticism. Out of that double movement James Martineau was born. He represented a new piety with a new learning, and somehow, though one would say that radical criticism was apt to be fatal to deep-seated religions faith, it has been Martineau's distinction that as he grew in years his spiritual insight waxed keener, while his critical opinions carried him far from the old traditional Unitarianism of his youth. He seems to have ultimately arrived at a position with regard to Biblical criticism identical with that of the most advanced German and Dutch schools, while in regard to the inward pieties of the heart he was more intensely Christian than ever. It might be thought strange that he was not troubled or perplexed by the thought that this apparent contradiction would prove fatal to the organisation of Christianity, for on the one band it cat at the roots of the Christian Church, while on the other it laboured to preserve that character and that faith for the cultivation of which the Christian Church exists. It may be doubted, however, whether Dr. Martineau saw the antinomy involved, on account of the strong bent of his mind in the direction of Quakerism. He had no ecclesiastical bias. To him Christianity was an inward and spiritual belief which needed but the simplest forms of outward expression. It was this feeling, perhaps, which made him so marked an individualist, and which has, perhaps, retarded his influence on the minds of a generation which is eminently social.

Dr. Martineau's individualism was accentuated by the Whiggism into which he was born and to which he held in the main all his life long. He had no love for democracy, and he had a strong hatred for anything in the shape of Socialism. Taking his ethics from Butler, and probably his political philosophy from Locke, he had much of the eighteenth-century thought in his fibre bound up with his life. He saw, as some of our present-day enthusiasts do not see, the infinite worth of the individual. His error, so far as he came short of a rounded philosophy of life, lay perhaps in the fact that he did not see all the many-sided relations of the individual, and how formal a word individuality is when the social factors which have made it up are not fully taken into consideration. Hence his political and his ethical philo- sophy hang together, and one feels that he was perchance hardly fit to do full justice to the great historic Churches whose conception, not of the doctrines, but of the social interpretation of Christianity is so unlike his own simple creed. We find, therefore, that with the new liantian creed, or with Hegelianism as now taught in several Scottish Universities and also at Oxford, Martineau had small sympathy. The great difficulty with Hegelianism is to separate the person from the world-stuff in which he is inter- woven so as to clearly present him on the stage of history. Philosophically, Hegelianism tends to run into Pantheism; socially and politically, into Socialism. Dr. Martineau felt the risks, it may well be, a little too keenly.

It is a rather painful fact, but we feel honestly bound to state it, that Martineau was not adequately appreciated in England. No doubt his subtle mind was not altogether comprehensible to even the cultivated English intellect, but that is not sufficient to account for the fact that while Leyden and Harvard honoured his great services to ethics and religion a generation ago, Oxford only recognised his existence long after he had passed his eightieth year, and Cambridge does not seem yet to have heard of him. Matthew Arnold said that Nonconformity was not in the main stream of national culture. Surely that will be admitted to be a taunt both unworthy and untrue when we remember that the Nonconformists can number among them a Dale, an Allon, a Baldwin Brown, and a Martineau. But that being so it is for our seats of learning to recognise that fact That they are doing so more than formerly we are glad to know. But assuredly it is not to the credit of our Univer- sities that they were officially ignorant of the existence of one of the chief religions thinkers of the century for years after he had been warmly honoured by foreign seats of culture.