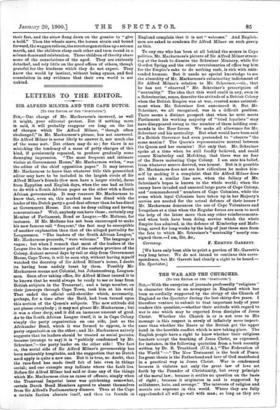 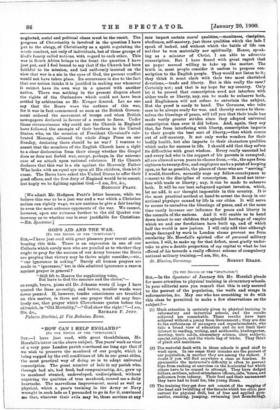 THE WAR AND THE CHURCHES.

[To THE EDITOR OF THE "SPECTATOR."] SIR,—With the exception of journals professedly "religious" in character there is no newspaper in England which has been so cordially supported by the clergy of the Church of England as the Spectator during the last thirty-five years. I therefore venture to submit to that important body of your readers this question,—whether their attitude with regard to war is one which may be expected from disciples of Jesus Christ. Whether the Church is or is not true to His message in this respect is surely of infinitely more import- ance than whether the Boers or the British get the upper hand in the horrible conflict which is now taking place. The English people have a right to know whether their religious teachers accept the teaching of Jesus Christ, as expressed, for instance, in the following quotation from a book recently written by Dr. B. Trueblood (U.S.A.), "The Federation of the World" :—" The New Testament is the book of Peace. Its great thesis is the Fatherhood and love of God manifested in a practical way in Jesus Christ. War is condemned because it violates not only the great law of love set forth by the Founder of Christianity, but every principle of the moral law; because it settles no question on the basis of right ; because it originates in and is supported by selfishness, hate, and revenge." The interests of religion and morals are supreme in this world. Where they are fully apprehended all will go well with man ; so long as they are neglected, social and political chaos must be the result. The progress of Christianity is involved in the question I have put to the clergy, of Christianity as a spirit regulating the whole conduct, not only of individuals, but of those groups of God's family called nations, with regard to each other. This war in South Africa brings to the front the question I have just put, and I feel bound to say that if the Church had been faithful to its mission, and had uniformly insisted on the view that war is a sin in the eyes of God, the present conflict would not have taken place. Its occurrence is due to the fact that our nation thinks it is justified in making war whenever It cannot have its own way in a quarrel with another nation. There was nothing in the present dispute about the rights of the Outlanders which could not have been settled by arbitration as Mr. Kruger desired. Let no one say that the Boers were the authors of this war, for it was in fact commenced so soon as the British Govern- ment ordered the movement of troops and when British newspapers declared in favour of a resort to force. Under those circumstances why could not the Church in England have followed the example of their brethren in the United States, who, on the occasion of President Cleveland's cele- brated Message, silenced the whole Jingo Press on one Sunday, declaring there should be no war ? I venture to assert that the members of the English Church have a right to a clear declaration from their clergy whether the Gospel does or does not forbid war, except, perhaps, in the extreme case of an attack upon national existence. If the Church declares that this war is a sin against the Heavenly Father Who looks with an equal eye upon all His children, then let it cease. The Boers have asked the United States to offer their good offices, and the first duty of England would be to assent, lest haply we be fighting against God.--I am, Sir, &c.,

[We admit Mr. Hodgaon Pratt's letter because, while we believe this war to be a just war and a war which a Christian nation can rightly wage, we are anxious to give a fair hearing to even the most extreme opponents of the war. We cannot, however, open our columns further to the old Quaker con- troversy as to whether war is ever justifiable for Christians. —ED. Spectator.]