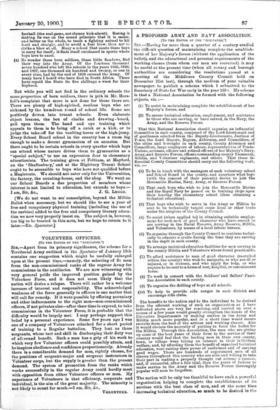 [To THE EDITOR OF VIE "SPECTATOR."]

Sin,—Apart from its primary significance, the scheme for a Territorial Army outlined in the Spectator of January 13th contains one suggestion which might be usefully enlarged upon at the present time,—namely, the selecting of fit men from the non-commissioned ranks of the regular Army for commissions in the auxiliaries. We are now witnessing with very general pride the improved position gained by the Volunteer Force, and it does not seem likely that the nation will desire a relapse. There will rather be a welcome increase of interest and responsibility. The acknowledged weakness of the force generally in officers is one matter that will call for remedy. If it were possible by offering pecuniary and other inducements to the right men—non-commissioned officers, if not privates also—after their time is expired, to take commissions in the Volunteer Force, it is probable that the difficulty would be largely met. I may perhaps support this belief by a personal experience. Some few years ago I was one of a company of Volunteers attached for a short period of training to a Regular battalion. They lent us three sergeants, whose tact and skill in discharging their duty was of all-round benefit. Such a man has a grip of his work to which very few Volunteer officers could possibly attain, and he inspires obedience and confidence proportionately. Already there is a considerable demand for men, rightly chosen, for the positions of sergeant-major and sergeant instructors in Volunteer corps, but the supply is greater than the present demand. The system of promotion from the ranks which works successfully in the regular Army could hardly meet with opposition from either Volunteer officers or men. My experience of Volunteers is that efficiency, corporate and individual, is the aim of the great majority. The minority is not likely to count for much.—I am, Sir, &c.,