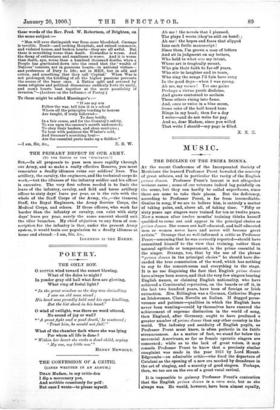 THE PRIMARY DEFECT IN OUR ARMY.

[To THE EDITOR 01, THE "SPECTATOR.") SIR,—In all proposals to pass men more rapidly through our Army, and so make a really effective Reserve, you must remember a deadly idleness ruins our soldiers' lives. The artillery, the cavalry, the engineers, and the technical corps do work,—but the idleness of the infantry soldier and his officer is excessive. The very first reform needed is to limit the leave of the infantry, cavalry, and field and horse artillery officer to sixty days' leave per year, as is the rule with the whole of the Staff Corps of the Army, viz.,—the General Staff, the Royal Engineers, the Army Service Corps, the Medical Corps, and others. If these officers, who work far harder than the infantry or cavalry, can exist with sixty days' leave per year, surely the same amount should suit the idler branches. My chief objection to any form of con- scription for the infantry is that, under the present Army system, it would train our population to a deadly idleness at home and abroad.—I am, Sir, &c.,

IDLENESS IS THE ENEMY.