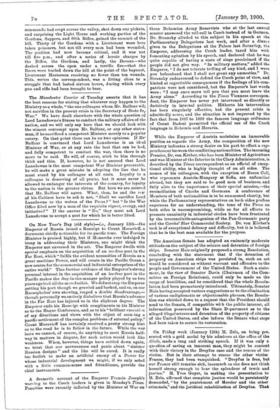 Page 2, 20 January 1900 — While the Emperor of Austria maintains an immovable position as
Close

While the Emperor of Austria maintains an immovable position as

regards the Army, the composition of the new Ministry indicates a strong desire on his part to effect a rap- prochement between the conflicting nationalities. The incoming Premier, Dr. von Kerber, who has been Minister of Agriculture and was Minister of the Interior in the Clary Administration, is described by the Times correspondent as an official of excep- tional ability, who is highly thought of on all sides. The names of his colleagues, with the exception of Baron Cal], who represents Austria-Hungary at Sofia, are unfamiliar abroad, but they are said to be good men of business, and fully alive to the importance of their special mission,—the reconciliation of Czechs and Germans. A conference of Members of both nationalities is to be summoned shortly, but while the Parliamentary representatives on both sides profess eagerness for an understanding, the tone of the Press on both sides is uncompromising, while so far all efforts to promote unanimity in industrial circles have been frustrated by the irreconcilable antagonism of the Pan-Germanic party and the Czechs' Slav Commercial Society. Dr. von Korber's task is of exceptional delicacy and difficulty, but it is believed that he is the best man available for the purpose.