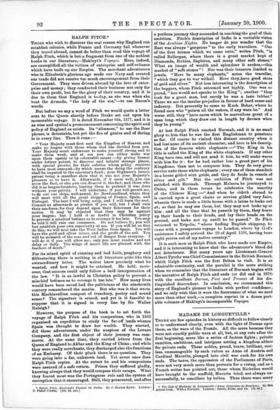 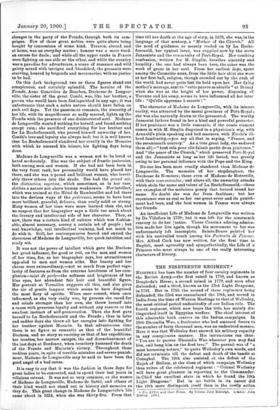 THERE are few episodes in history so difficult to follow closely or to understand clearly, even with the light of Dumas upon them, as the wars of the Fronde. All the more because they were not exactly public wars at all, but, at any rate after the first beginning, more like a series of faction fights ; private enmities, ambitions, and intrigues setting a kingdom ablaze for private ends. These nobles, proud, brave, brilliant, rest- less, unmanageable by such rulers as Anne of Austria and Cardinal Mazarin, plunged into civil war each for his own ends. The taxes, the oppression of the Parliament of Paris, were not very much more than pretexts for a rising, and as a French writer has pointed out, those whom Richelieu would have brought to the scaffold, Mazarin tried, not always un- successfully, to conciliate by bribes. Thus there were many

changes in the party of the Fronde, through both its cam- paigns. Few of these great nobles were quite above being bought by concessions of some kind. Treason, abroad and at home, was an everyday matter ; honour was a mere word, an excuse for duels; and while all the upper ranks in France were fighting on one side or the other, and while the country was a paradise for adventurers, a scene of romance and wild gaiety mixed with intrigue and bloodshed, the peasants were starving, hunted by brigands and mercenaries, with no justice to be bad.

On this dark background two or three figures stand out conspicuous, and certainly splendid. The heroine of the Fronde, Anne Genevieve de Bourbon, Duchesse de Longue- ville, the sister of the great Conde, was, like her brother, a perFon who would have been distinguished in any age; it was unfortunate that such a noble nature should have fallen on such evil days. Yet the passionate romance, the sincerity of her life, with its magnificence so sadly marred, lights up the Fronde with the presence of one disinterested soul. Madame de Longueville wanted nothing for herself, and found nothing except ruin: she sacrificed everything for her brother and for La Rochefoucanld, who proved himself unworthy of her. Conde's love and loyalty she always had; but it is well known that La Rochefoncauld slandered her cruelly in the Memoirs with which he amused his leisure, his fighting days being done.

Madame de Long ueville was a woman not to be loved or hated moderately. S he was the subject of frantic jealousies, both among men and women. If she had not been born in the very front rank, her personality would have placed her there, and she was a proud and brilliant woman, who inevit- ably threw others into the shade. She had the grand air, the distinction suprne, which sometimes, as in her case, clothes a nature not above human weaknesses. Her intellect, which was trained at the Hotel de Rambonillet and led there into the devious ways of the precieuses, seems to have been more brilliant, graceful, delicate, than really solid or strong. Many women of her time were more learned than she, and we suspect that her biographer says a little too much about the literary and intellectual side of her character. Then, as now, there was a certain kind of culture which was fashion- able, almost necessary, among a certain set of people ; but real knowledge, real intellectual training, had not much to do with it. Still, her contemporaries feared and envied the cleverness of Madame de Longueville, her quick intuition and ready wit.

It was not the power of intellect which gave the Duchess her great influence, for good or evil, on the men and women of her time, for, as her biographer says, her attractiveness appealed to men and women alike. Her beauty and her charm were extraordinary,—not so much from perfect regu- larity of features as from the extreme loveliness of her corn- plexion—teint de perle—the softness and brightness of her blue eyes, her abundant fair hair and beautiful figure. Her portrait at Versailles suggests all this, and also gives the air of gentle languor which seems to have disguised the most fiery of spirits. When once roused, when once influenced, as she, very easily was, by persons she cared for and minds stronger than her own, she threw herself into a cause with generous loyalty and without any reserve or the smallest instinct of self-preservation. Thus she first gave herself to La Rochefoncauld and the Fronde ; thus in later and sadder days she threw all her energies into fighting for her brother against Mazarin. In that adventurous time there is no figure so romantic as that of the beautiful Duchess, and no story so exciting as that of her expeditions, her treaties, her narrow escapes, the sad disenchantment of the last days at Bordeaux, when treachery hastened the death of the Fronde and Mazarin's victory. Throughout those reckless years, in spite of terrible mistakes and severe punish- ment, Madame de Longueville may be said to have been the good angel of a bad cause.

It is easy to say that it was the fashion in those days for great ladies to be converted, and to spend their last years in religions retreat. It was not so very common, or the names of Madame de Longneville, Madame de Sable, and others of their kind would not stand out in history and memoirs as they do. This great change in Madame de Longaeville's life came about in 1654, when she was thirty-five. From that

time till her death at the age of sixty, in 1679, she was, in the language of that century, a "Mother of the Church." All the need of guidance, so meanly traded on by La Roche- foncauld, her cynical lover, was supplied now by the stern Jansenists and the community of Port-Royal. Her touching confession, written for M. Singlin, breathes sincerity and humility : the one had always been hers, the other was the work of grace in her soul. From her earliest days, spent among the Carmelite nuns, from the little hair shirt she wore at her first ball, religion, though crowded out by the rush of the world, had never quite lost its hold upon her. Her dying mother's message, sent to " cette pauvre miserable" at Stenay when she was at the height of her power, disposing of Turenne and his army, seems to have influenced all her later life : "Qu'elle apprenne t mourir !"

The character of Madame de Longueville, with its intense reality, was attracted by the moral greatness of Port-Royal ; she was also naturally drawn to the persecuted. The worthy Jansenist fathers found in her a kind and powerful protector. If her penitence was a little romantic, if the comic element comes in with M. Singlin disguised in a physician's wig, with Arnauld's plain speaking and bad manners, with Nicole's ill- bred familiarity,—you say all that in saying, "France, and the seventeenth century." As a true great lady, she endured them all,—" tout cela pour elle faisait partie de sa penitence." And "the peace of the Church," which preserved Port-Royal and the Jansenists as long as her life lasted, was greatly owing to her personal influence with the Pope and the King.

No one has been more cruelly slandered than Madame de Longueville. The memoirs of her stepdaughter, the Ducbesse de Nemours; those even of Madame de Motteville, with their sous-entendus ; and above all, the unworthy attacks which stain the name and talent of La Rochefoucauld,—these are examples of the malicious gossip that buzzed round her name. No doubt she was far from faultless; but her repentance was as real as her one great error and its punish- ment had been, and the best women in France were always her friends.

An insufficient Life of Madame de Longueville was written by De Villefore in 1739; but it was left for the nineteenth century to do her justice. Victor Cousin's adoring admira- tion made her live again, though his monument to her was unfortunately left incomplete. Sainte-Benve painted her with his unrivalled touch among his Portraits de Fernrnes. Mrs. Alfred Cock has now written, for the first time in English, most agreeably and sympathetically, the Life of a Princess who mast always be one of the really interesting characters of history.