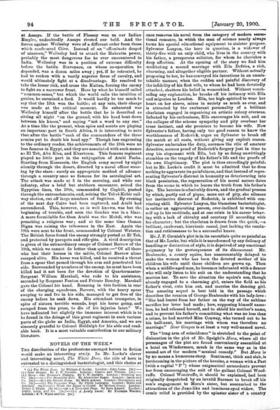 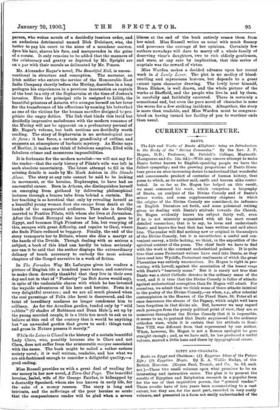 once removes his novel from the category of modern sensa. tionel romance, in which the man of science nearly always turns his special educational equipment to sinister purpose. Sylvester Lanyon, the hero in question, is a widower of thirty-five with an only child, who lives in the country with his father, a prosperous solicitor, for whom he cherishes a deep affection. At the opening of the story we find him meditating a second marriage with Ella Defries, a rich, charming, and altogether eligible partner. Without actually proposing to her, he has conveyed his intentions in an unmis- takable manner, when the sudden and painful discovery of the infidelity of his first wife, to whom he had been devotedly attached, shatters his belief in womankind. Without vouch- safing any explanation, he breaks off his intimacy with Ella and migrates to London. Ella, too high-spirited to wear her heart on her sleeve, mixes in society as much as ever, and is attracted by the exuberant personality of a brilliant charlatan engaged in organising an artistic colony overseas. Infected by his enthusiasm, Ella encourages his suit, and on the collapse of the scheme sympathy and pity overbear her truer instinct, and she promises to become his wife. Now Sylvester's father, having only too good reason to know the worthlessness of Roderick, urges on Sylvester to break off the match at all costs, without giving any explicit reason. Sylvester undertakes the duty, assumes the role of amateur detective, secures proof of Roderick's forgery just in time to stop his elopement with Ella, but by so doing unwittingly stumbles on the tragedy of his father's life and the proofs of his own illegitimacy. The plot is thus exceedingly painful, but to Mr. Locke's credit it must be admitted that he does nothing to aggravate its painfulness, and that instead of repre- senting Sylvester's distrust in humanity as deteriorating into black pessimism, the regeneration of his moral nature dates from the scene in which be learns the truth from his father's lips. The heroine is admirably drawn, and the gradual process by which, partly out of pique, more out of pity, she silences her instinctive distrust of Roderick, is exhibited with con- vincing skill. Sylvester Lanyon, the blameless bacteriologist, is rather an aggravating person, over-inclined to wrap him- self up in his rectitude, and at one crisis in his career behav- ing with a lack of chivalry and courtesy ill according with his character; but the charlatan is drawn from the quick,—a brilliant, exuberant, histrionic rascal, just lacking the resolu- tion and ruthlessness to be a successful knave.

Mr. J. F. Cornish's plot is in its essentials quite as painful as that of Mr. Locke, but while it is unredeemed by any delicacy of handling or distinction of style, it is deprived of any emotional poignancy by the grotesqueness of its denouement. Mr. Brabrooke, a county squire, has unaccountably delayed to make the woman who has been the devoted mother of his children his wife until those children are grown up. Then when a middle-aged man, he becomes infatuated with a dancer who will only listen to his snit on the understanding that he marries her. To save the situation the squire's son, though already engaged to a charming girl, enters the field as his father's rival, cuts him out, and marries the dancing girl. The amazing sequel is best told in the passage which describes the reunion of George Brabrooke with his lady-love : "She had learnt from her father on the way of the sublime sacrifice her lover had made ; how, supposing himself name- less, he had released herself, and to shield his mother's name, and to prevent his father's committing what was no less than a crime, he had married Miss Conway, who turned out to be his half-aunt, his marriage with whom was therefore no marriage." Sour Grapes is at least a very well-named novel.

The "long arm of coincidence" is stretched to the point of dislocation in the plot of Mr. Speight's Mora, where all the personages of the plot are found conveniently assembled at a hotel on Windermere, much in the same way as in the second act of the modern "musical comedy." But Mora is by no means a humorous story. Sentiment, thick and slab, is forthcoming in the picture of the heroine, a woman with a Past (with a capital "P ") whose enigmatical antecedents prevent her from encouraging the suit of the gallant Colonel Wood- ruffe. Colonel Woodruffe, it should be explained, had been originally despatched by an invalid Baronet to break off his eon's engagement to Mora's sister, but succumbed to the attractions of the Juno-like and luminous-eyed widow. The comic relief is provided by the spinster sister of a country

parson, who writes novels of a decidedly luseions order, and an audacious detrimental named Dick Dal:Amer, who, the better to pay his court to the niece of a mundane matron. dyes his hair, shaves his face, and masquerades in the guise of a curate. It only remains to be added that the manners of the aristocracy and gentry as depicted by Mr. Speight are on a par with their morals as delineated by Mr. Pinero.

Mr. Alexander Eagar's novel, The Beautiful Evil, is uncon- ventional in structure and conception. The narrator, an Irish soldier who enters the service of the Honourable East India Company shortly before the Mutiny, describes in a long prologue his experiences in a previous incarnation as captain of the host in a city of the Sepharvaim at the time of Joshua's invasion. Here the principal role is assigned to Lilith, the beautiful priestess of Astarte. who avenges herself on her lover for the transference of his affections by naming his betrothed as one of the victims for the human sacrifice designed to pro- pitiate the angry deities. The link that binds this lurid but decidedly impressive melodrama with the modern romance of the Mutiny will not be apparent on a perfunctory perusal of Mr. Eagar's volume, but both sections are decidedly worth reading. The story of Sepharvaim is no archteological tour de force; it has force, a certain grandiosity of outline, and suggests an atmosphere of barbaric mystery. As Heine says of Berlioz, it makes one think of fabulous empires, filled with fabulous crimes and monstrous impossibilities.

It is fortunate for the modern novelist—we will not say for the reader—that the early history of Pilate's wife was left in such absolute uncertainty. The latest attempt to fill in the missing details is made by Mr. Mark Ashton in She Stands Alone. The story at any rate cannot be said to be lacking in movement, or the heroine, Euphrosyne, to have had an uneventful career. Born in Athens, she distinguishes herself on emerging from girlhood by delivering philosophical lectures through a brazen tube from behind a curtain. But her teaching is so heretical that only by revealing herself as a beautiful young woman does she escape from death at the hands of the exasperated audience. Then she is forcibly married to Pontius Pilate, with whom she lives at Jerusalem. After the Great Betrayal she leaves her husband, goes to Egypt, and becomes High Priestess of Isis, but wearying of this, escapes with great difficulty, and repairs to Gaul, where she finds Pilate reduced to beggary. Finally, the end of the story transports her to Britain, where she dies a martyr at the hands of the Druids. Though dealing with so serious a subject, a book of this kind can hardly be taken seriously nor can it be said that the author displays the extraordinary delicacy of touch necessary to embody the most solemn chapters of the Gospel narrative in a work of fiction.

In The Forsaken Way Mr. Lafargtte gives his readers a picture of English life a hundred years hence, and contrives to make them devoutly thankful that they live in their own day and not in that of " Posterity " (as Bob Acres would say), in spite of the undeniable charm with which he has invested the wayside adventures of his hero and heroine. Festa is a very delightful creature ; and we are all much pleased when the real parentage of Felix (the hero) is discovered, and the taint of hereditary madness no longer condemns him to celibacy. As for the Arcadian garden, tended only by "wild rabbits" (0 shades of Robinson and Dean Hole!), set up by the young married couple, it is a little too much to ask us to believe at this end of the century that it would be anything but "an unweeded garden that grows to seed : things rank and gross in Nature possess it merely."

While the Lotus is Closed is the history of a certain beautiful Lady Clare, who, possibly because she is Clare and not Clara, does not suffer from the aristocratic morgue associated with the name. The book might be called a rather serious society novel; it is well written, readable, and has what we are old-fashioned enough to consider a delightful quality,-1 good ending.

Miss Russell provides us with a great deal of reading for our money in her new novel, A Torn-Out Page. The beautiful heroine, Isabel, wife of Sir George Fairfax, is kidnapped by a dastardly Spaniard, whom she has known in early life, for the sake of a money ransom. The story is long and intricate, and the sufferings of the poor heroine so acute that the compassionate reader will be glad when a severe illness at the end of the book entirely erases them from her mind. Miss Russell writes as usual with much fluency and possesses the courage of her opinions. Certainly few authors nowadays will dare to marry off a whole family of deserving vicar's daughters, two to rich elderly gentlemen, and state, at any rate by implication, that this series of nuptials was the reward of virtue.

Miss Warden makes a decided advance upon her recent work in A Lowly Lover. The plot is no medley of blood- curdling and mysterious horrors, but depends to a great extent upon character drawing. The lowly lover himself, Bram Elshaw, is well drawn, and the whole picture of the works at Sheffield, and the people who live in and by them, is carefully and faithfully executed. There is certainly a sensational end, but even the pure novel of character is none the worse for a few striking incidents. Altogether, the story is more than readable, and Miss Warden must be congratu- lated on having turned her facility of pen to worthier ends than usual.