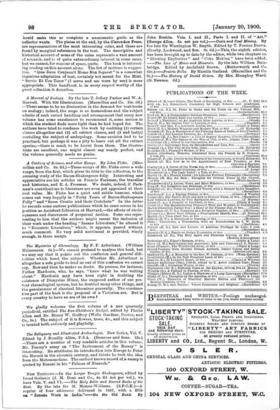 A Century of Science, and other Essays. By John Fiske.

(Mac- millan and Co. 8s. 6d.)—These essays of Mr. Fiske cover a wide range, from the first, which gives its title to the collection, to the amusing study of the Bacon-Shakespeare folly. Interesting and appreciative are his articles on Francis Parkman, the traveller and historian, and E. A. Freeman. We doubt, indeed, if Park- man's contributions to literature are even yet appraised at their real value. Mr. Fiske has a quiet and subtle humour, which comes out very happily in "Forty Years of Bacon-Shakespeare Folly" and "Some Cranks and their Crotchets." In the latter he records some carious publications which he came across in his position as Assistant-Librarian at Harvard,—the efforts of circle- squarers and discoverers of perpetual motion. Some one repre- senting to him that the authors might resent the inclusion of their work under the heading "Insane Literature," he altered it to "Eccentric Literature," which, it appears, passed without much comment. No very solid nutriment is provided, wisely enough, in these essays.