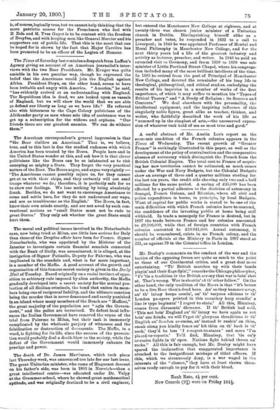 Page 3, 20 January 1900 — The Times of Saturday last contains a despatch from Laffan's
Close

The Times of Saturday last contains a despatch from Laffan's

Agency giving an account of an American journalist's inter- views with the two Boer Presidents. Mr. Kruger was quite amiable in his own peculiar way, though he expressed the belief that the Americans would join the English against Africa. President Steyn, on the other hand, seems to have been irritable and angry with America. "America," he said, "has evidently arrived at an understanding with England. The Republican idea is dead, we are looked upon as vassals of England, but we will show the world that we are able to defend our liberty as long as we have life." He referred also with bitterness to the Cape Colony politicians of the Afrikander party as men whose sole idea of assistance was to get up a subscription for the widows and orphans. "Our friends there are our greatest enemies. We can do without them."