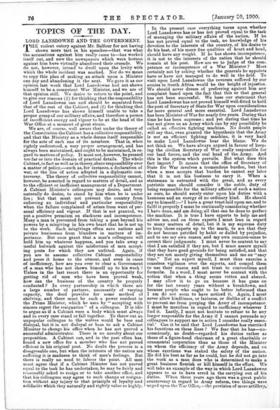 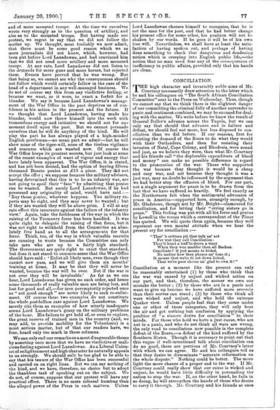 LORD LANSDOWNE AND THE GOVERNMENT.

/111E violent outcry against Mr. Balfour for not having shown more tact in his speeches—that was what the accusations against him really came to—has worked itself out, and now the newspapers which were hottest against him have virtually abandoned their crusade. We do not, however, intend to dwell upon the levity with which the whole incident was marked. Nor do we mean to copy this plan of making an attack upon a Minister one day and abandoning it the next. We gave it as our opinion last week that Lord Lansdowne had not shown himself to be a competent War Minister, and we are of that opinion still. We desire to return to the point, and to give our reasons (1) for thinking that the responsibility of Lord Lansdowne can and should be separated from that of the rest of the Csbinet, and (2) for thinking that Lord Lansdowne has shown himself unable to take a proper grasp of our military affairs, and therefore a person of insufficient energy and vigour to be at the head of the War Office at a moment of great strain.

We can only end our remarks on a most disagreeable theme by asserting once more that we have no vindictive or mali- cious feeling against Lord Lansdowne. As a Liberal Union- ist of enlightenment and high character he naturally appeals to us strongly. We should only be too glad to be able to say that his tenure of the War Office has been successful and carried on on right lines. But we can say nothing of the kind, and we have, therefore, no choice but to adopt the thankless task of speaking out on the subject. We do not, of course, suppose that our protest will have any practical effect. There is no more colossal humbug than the alleged power of the Press in such matters. Unless Lord Lansdowne chooses himself to recognise, that he is not the man for the post, and that he had better change his present office for some other, his position will not ba shaken by our words. If he gees it will be of his own free will. Nevertheless, we shall have at least the satis- faction of having spoken out, and perhaps of having done something to check that dangerous and deadening notion which is creeping into English public life,—the notion that no man need fear any of the consequences of inefficiency in public affairs, provided only that his hands are clean.