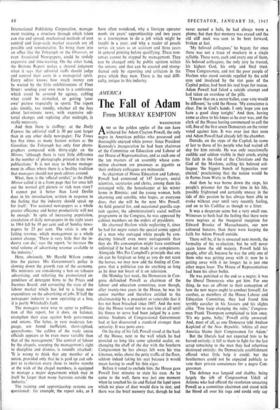 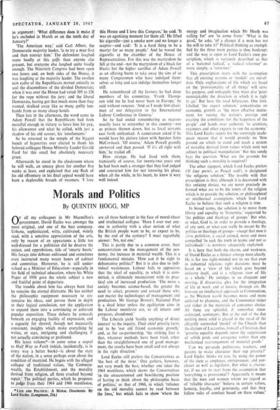 The Fall of Adam AMERICA

AND so the golden apples of the sun have withered for Adam Clayton Powell, the only negro in American politics who possessed and thoroughly enjoyed white power. Since President Kennedy's inauguration he had been chairman of the Committee on Education and Labour of our House of Representatives, and as such one of the ten masters of an assembly whose com- mittee chairmen are presences as gigantic as their ordinary colleagues are minuscule.

As chairman of House Education and Labour, Powell had command of 147 lawyers, social scientists, secretaries and clerks, among them his estranged wife, the housekeeper at his winter home in Biminia; and the young woman, both charming and sensible, who hopes, as everyone does, that she will be the next Mrs Powell. As field general for, and occasional guerilla cap- tain against, the administration's social welfare programme in the Congress, he was appeased by cabinet members on the orders of presidents.

He charmed Harlem while neglecting it, since he had for negro voters the special comic appeal of a man who outraged white people by con- ducting himself even more outrageously than they do. His consumption might have continued unlimited if he had not made it so conspicuous. Alongside Mrs Pat Campbell's principle that any sin can be forgiven so long as you do not scare the horses, we may now add the finding of Con- gress that a politician can do anything so long as he does not boast of it on television.

On Monday last week, the Democrats in Con- gress defrocked Powell as chairman of the labour and education committee, even though, after twenty-two years in the House, he was its senior member and therefore entitled to the chairmanship by a precedent so venerable that it has not been breached since 1807. And the next day the House voted not to seat him at all until his fitness to serve had been judged by a com- mittee. Students of Congressional Government had at last discovered a standard stronger than seniority. It was penis envy.

On the day of his fall, Powell stood at the back of the House, next to the wall which he had prowled so long like some splendid ocelot, ex- changing the chaff of the day with the Southern Congressmen he has always felt were his true kinsmen, miles above the petty traffic of the floor, seldom indeed taking his seat because it would mean having to snuff his thin cigar.

Before it voted to exclude him, the House gave Powell four minutes to state his case. As he came to the well, there was just one moment when he touched his tie and flicked the lapel upon which no piece of dust would dare to rest; and there was the brief memory that, though he had

never earned a halo, he had always worn a plume; but then that memory was erased and the old stiff neck was seen to be bent forward, broken at last.

'My beloved colleagues,' he began; for once there was not a trace of mockery in a single syllable. These were, each and every one of them, his beloved colleagues, the only jury he trusted, his highest God, his only and final trust. These Congressmen, and not the poor people of Harlem who stood outside repelled by the cold eyes and insulated by the riot guns of the Capitol police, had been his real hope for rescue. Adam Powell had faked a suicide attempt and had taken an overdose of the pills.

'I know that on a secret ballot, your vote would be different,' he told the House. 'My conscience is clear. I'm in God's hands. I only hope you can have a good sleep tonight.' And then, having come as close to his knees as he ever was, and the clerk of the House having commenced to call the roll, five of the first seven Democrats on the roster voted against him. It was over just that soon and Adam Powell had already left the chamber.

Outside, on the steps of the Capitol, he came at last to those of his people who had waited all day for him outside. He was only occasionally audible and seldom visible in their crush, crying his faith in the God of the Christians and the God of the Moslems, calling his beloved col- leagues 'the biggest bunch of hypocrites ever elected,' proclaiming that the nation would be in flames from Watts to Harlem.

And then he was borne down the steps, his people's prisoner for the first time in his life, possibly frightened and certainly uneasy in the tide of this passion he has always been able to evoke without ever until very recently feeling, and on to his Cadillac as though to a litter.

It was a desperate scene but a very small one. Witnesses to both had the feeling that there were more negroes at the inaugural reception for Edward Brooke of Massachusetts, our new coloured Senator, than there were keeping the faith for Adam Powell outside.

There will be, if he is unseated next month, the formality of his re-election; but he will never again know the old majesty. Powell held his people, after all, because he was the only one of them who was getting away with it; now he is getting away with it no longer; he is just one other negro loser. The House of Representatives had been his silver bullet.

He was punished at the end as a negro; it was the liberal Democrats who got him. For one thing, he was an affront to their conception of how the new negro ought to conduct himself; for another, as members of the House Labour and Education Committee, they had found him terribly cavalier in his favours and his slights alike. 'You keep changing the rules,' Congress- man Frank Thompson complained to him once. 'It's my game, baby,' Powell airily answered. And, most of all, as one Democrat told Andrew Kopkind of the New Republic, 'whites all over America blame their Congressmen for Adam.'

But the liberals had not expected him to be barred entirely; it fell to them to fight for the last scrap remaining to the man they had otherwise destroyed entirely; the Democratic establishment offered what little help it could; but the Southerners could not be expected publicly to vote their private consciences for a negro Con- gressman.

The defence was languid and shabby, being largely the job of Congressman Udall of Arizona who had offered the resolution unseating Powell as a committee chairman and stood with the blood all over his toga and could only say in argument: 'What difference does it make if he's excluded in March or on the tenth day of January?'

`The American way,' said Carl Albert, the Democratic majority leader, 'is to try a man first and then convict him.' The defendant laughed more loudly at this gaffe than anyone else present, but everyone else laughed quite loudly enough. The Ninetieth Congress had been open two hours and, on both sides of the House, it was laughing at the majority leader. The swollen new cadre of the Republicans moved unitedly to seal the discomfiture of the divided Democrats; when it was over the House had voted 305 to 126 for the rope without the jury; and the liberal Democrats, having got that much more than they wanted, skulked away like so many guilty hus- bands from so many cheap hotels.

Then late in the afternoon, the word came to Adam Powell that the Republicans had been merciful enough in victory to leave him his pay, his allowances and what he called, with just a shadow of his old savour, his 'emoluments.'

So he returned to the temple of the biggest bunch of hypocrites ever elected to thank his beloved colleague House Minority Leader Gerald Ford for this small but absolutely necessary grace.

Afterwards he stood in the cloakroom where he will walk, an uneasy ghost for another five weeks at least, and explained that any flash of his old effrontery in his final appeal would have been a deplorable breach of manners. `I love

this House and I love this Congress,' he said. 'It was an agonising moment for them all.' He lifted his cigarello—just a smoke now and no longer a sceptre—and said: 'It is a hard thing to be a martyr for so many people.' And he waved the cigarello at the chamber of the House of Representatives. For this was the martyrdom he felt at the end—not the martyrdom of a black for blacks but the higher sacrifice of Adam Powell, as an offering burnt to take away the sins of so many Congressmen who have indulged them- selves so long and can indulge themselves longer still.

He remembered all the favours he had done members of his committee. 'Frank Thomp- son told me he had never been to Europe,' he said without rancour. 'And so I made him chair- man of our delegation to the International Labour Conference in Geneva.'

So he had ended remembering as negroes usually have to remember in this country—not as princes thrown down, but as loyal servants cast forth unthanked. A cameraman asked if he would have his picture taken with Speaker John McCormack. 'Of course,' Adam Powell grandly answered and then paused. 'If it's all right with him,' he trailed off.

How strange. He had lived with them, transiently of course, for twenty-two years and he had been such a stranger that they had judged and convicted him for not knowing his place, when all the while, in his heart, he knew it very well indeed.