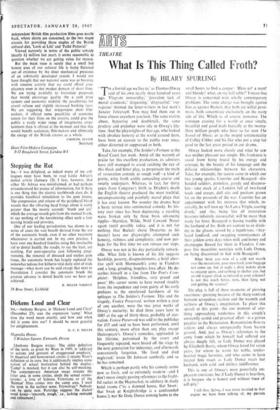 No Short Answer SIR,—Penelope Houston gave a brisk and comical

survey of the short film battlefield in `No Short Answer' (December 23). To those of us scrabbling in the mud it had a sprightly detachment reminiscent of those captains' ladies viewing Balaclava through binoculars.

If we seem sectarian and embittered to Miss Houston it is our fault and we are sorry. We know short films make an unalluring clarion call; in fact, they could reasonably be dismissed as a purely parochial concern were it not for some rather im- portant special factors.

Firstly, the cost of film-making dictates short films as the only practical area for experiment and the development of new talent. If British films are to survive at all this is where the roots of a native industry can be established. Secondly, independent short film production in this country has become virtually impossible because of the monopoly con- trol of cinema distribution and exhibition. Without a booking on one of the two major circuits a short film cannot cover its costs. Understandably, Rank and ABPC show a preference for their own products, a situation which drew one of the only unqualified criticisms from the Monopolies Com- mission, which firmly described the lack of exhibi- tion opportunities for independent shorts as 'against the public interest' Thirdly, the bulk of the public subsidy (Eady money) designed to encourage independent British film production films goes neatly back, where shorts are concerned, to the two major circuits for providing those staples of the British cultural diet, 'Look at Life' and 'Pathe Pictorial.'

Viewed narrowly in terms of the public subsidy (nearly Li- million last year), it seems reasonable to question whether we are getting value for money.

But the main issue is surely that a small but honest area of our cultural life is being flattened out of existence by the sheer mechanical pressures of an arbitrarily developed system. I would not have thought that our national scene was so bursting with creative activity that we could afford com- placency even in this modest domain of short films. We are trying painfully to formulate proposals that would encourage quality (by a cash prize system) and economic viability (by possibilities for circuit release and slightly increased booking fees). We are suggesting that independent short film- makers, if offered some possibility of economic return for their films on the circuits, could give the public a vastly wider range of imaginative enter- tainment than is offered at the moment and that this would benefit audiences, film-makers and ultimately the energy of the British cinema as a whole.