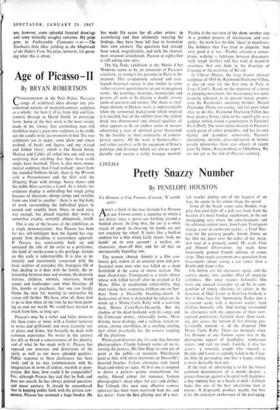 ONCENTRATED in the Petit Palais, Picasso's V./range of sculptural ideas disrupt any pre- conceived notions of twentieth-century sculpture as a whole: for here it all is, from Arp and Gia- cometti through to David Smith, in prototype form. Some of the best work is the most recent, made in the 'sixties; that astonishing man will doubtless make a great new sculpture as he snuffs out the candle in his last moments in bed. The new sculptures are in paper, some plain and others painted, of heads and figures and one twisted and folded 'chair,' which is like David Smith, Matisse and Calder all rolled into one and more surprising than anything that these three could singly have invented. There is also more monu- mental sculpture than I had realised: apart from the rounded bulbous heads, there is the Woman with a Perambulator and the Girl with the Skipping Rope with strange, heavy shoes—and the noble Man carrying a Lamb. As a whole, the sculpture display is enthralling but tough going because of incessant, abrupt jumps and switches from one kind to another : there is no big body of work surrounding the individual pieces to extend and amplify them. Once, in each case, was enough, but placed together they make a somewhat cryptic, certainly phlegmatic, world. This is one of the lessons of the exhibition, as a single demonstration: that Picasso has been far less self-indulgent than the legend has sug- gested. Iron discipline is everywhere apparent. If Picasso has consistently built up and sustained the role of the artist as a performer, this kind of smokescreen is his privilege. Genius on this scale is indestructible. It is also so in- timately and consistently concerned with the basic realities of everyday life, bourgeois life at that, dealing as it does with the family, the re- lationship between men and women, the domestic

interior, children, animals, mistresses, beach scenes and landscapes—and what threatens all this, bombs or psychosis, that one can hardly blame the man for wanting to externalise his vision still further. We have, after all, been slow

to go to him when all the time he has been paint- ing us and our world. We could have learned so much from him, so long ago.

Picasso's may be a richer and fuller domestic life than yours or mine, with a livelier turnover in wives and girlfriends and more eccentric sets of plates and dishes, but basically he deals with common experience. No writer in this century has left so broad a consciousness of his identity, and of what he has made with it: Picasso has exposed our neuroses and distortions of the spirit, as well as our more splendid qualities.

Public response to these disclosures has been

tardy and in no way commensurate with his imagination in terms of ardour, warmth or pene- tration. But then, how could it be comparable?

For, although Picasso has said that he finds and does not search, he has always painted questions and never answers. It should be remembered that in keeping public faith with his private con- science, Picasso has assumed a huge burden. He

has made life easier for all other artists: in assimilating and then ultimately rejecting his findings, they have been left free to formulate their own answers. The questions had already been asked, magnificently, and with the clearest, most resonant articulation. Picasso at eighty-five is still asking new ones.

The big Dada exhibition at the Musee d'Art Moderne seems to be an extension of Picasso's creativity, so strong is his presence in Paris at the moment. This scrupulously selected and cata- logued historical survey is also similar to some rather exigeant questionnaire set out in imaginary terms: the paintings, drawings, manuscripts and posters all seem to be playing a deadly serious game of question and answer. The shock or chal- lenge element in Dadaist work is understandable when the tormented background which inspired it is recalled, but all the exhibits have the slightly dead, two dimensional and clinical qualities of what appears to be an endless series of posters advertising a state of spiritual grace threatened by the hostility or sheer mediocrity of contem- porary society. All the work is business-like- and rather cerebral, with the exception of Ernst's paintings and drawings which are always unpre- dictable and sustain a richly baroque warmth.

Picabia is the star-turn of the show, another step in a gradual process of revaluation, and very aptly: his work has the thin. 'ideas' or manifesto- like boldness that I've tried to pinpoint. And very good it is too: Picabia remains a conun- drum, walking a tightrope between disconcert- ingly tough intellect and that kind of mawkish sweetness that one finds in the drawings of Cocteau or the paintings of Berard.

Le Cheval Majeur, the large bronze abstract sculpture of 1914 by Raymond Duchamp-Villon, is also on view for the first time in Paris at Louis Carres. Based on the structure of a horse in plunging movement, this masterpiece was quite properly enlarged to its present heroic propor- tions by Raymond's surviving brother, Marcel Duchamp. Dying too young, and too poor when alive to do this, Raymond Duchamp-Villon has been given a fitting salute to his superb gifts as a sculptor (which found a counterpart in Epstein's Rock Drill). The work relates directly to Picasso's tough grasp of cubist principles, and has its own dignity and grandeur; conversely, Picasso's electrifying absinthe glass-and-spoon in bronze greatly diminishes those cast objects of recent years by Johns, Rauschenberg or Oldenburg. We are not yet at the end of Picasso's century.