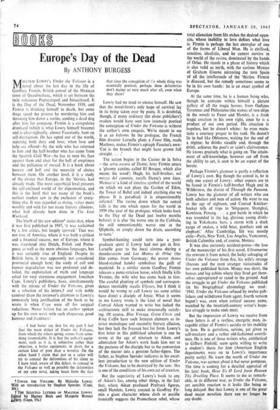 By ANTHONY BURGESS ALCOLM LOWRY's Under the Volcano is a novel about the last day in the life of Geoffrey Firmin, British consul of the Mexican town of Quauhnahuac, which is set between the twin volcanoes Popocatepetl and Ixtaccihuati. It is the Day of the Dead, November 1938, and Firmin is drinking himself to death, but some thugs speed the process by murdering him and throwing him down a ravine, sending a dead dog after him for company. Firmin is a compulsive drunkard (which is what Lowry himself became) and is clear-sightedly, almost Faustianly, bent on self-destruction. He has opted out of the world, rejecting both duty and love; when love and help are offered—by the wife who has returned to him and the half-brother who has come from the Spanish Civil War—he has to turn his face against them and elect for the hell of emptiness and the palliation of mescal. It is a book about heaven and hell and the necessity- of choice between them. On another level, it is a study of the choice that Europe, in the 'thirties, had already made. The most superficial level presents the self-enclosed world of the dipsomaniac, and this is the level that too many of the book's earliest readers saw to the exclusion of every- thing else. It was regarded as doing, rather more wordily and with far too many literary allusions, what had already been done in The Lost Weekend.

The blurb of the new editions states that, when it was first published in 1947, 'it was acclaimed by a few critics, but largely ignored.' That was not true of America, where it was both a critical and a financial success, nor of Europe, where it was translated into Dutch, Polish and Portu- guese as well as the more obvious languages, but it was certainly true of England. Despite its British hero, it was apparently not considered provincial enough here; the study of evil and human degradation was too profound and de- tailed, the exploitation of myth and language asked for very strenuous engagement. Jonathan Cape, Lowry's publishers, have, simultaneously with the reissue of Under the Volcano, given us a selection of his letters,t and with noble candour draw the reviewer's attention to Lowry immensely long justification of the book as he wrote it when Cape were all for surgical redactions. Never before has an author spoken up for his own work with such eloquence, good humour and frankness : . . . I had better say that for my part I feel that the main defect of Under the Volcano, from which the others spring, comes from some- thing irremediable. It is that the author's equip- ment, such as it is, is subjective rather than objective, a better equipment, in short, for a certain kind of poet than a novelist. On the other hand I claim that just as a tailor will try to conceal the deformities of his client so I have tried, aware of this defect, to conceal in the Volcano as well as possible the deformities of my own mind, taking heart from the fact

that since the conception of Cie whole thing was essentially poetical, perhaps these deformities don't matter so very much after all, even when they show!

Lowry had no need to excuse himself. He saw that the novel-form's only hope of survival lay in its being taken over by poets. It is doubtful, though, if many ordinary (let alone publishers') readers would have seen how intensely poetical the conception of Under the Volcano is without the author's own exegesis. We're meant to see it as an Inferno. In the prologue, the French film director Laruelle plans a Faust film, reads Marlowe, makes Firmin's epitaph Faustus's own: 'Cut is the branch that might have grown full straight. . .

The action begins in the Casino de la Selva —the selva oscura of Dante; later Firmin enters a 'gloomy cantina called El Bosque, which also means the wood'; Hugh, his half-brother, nel mezzo del cammin, recalls Dante's own lines. Mexico is 'a kind of timeless symbol of the world on which we can place the Garden of Eden, the Tower of Babel and indeed anything else we please. It is paradisal; it is unquestionably infernal.' The ravine down which the consul falls is the one which opens for the world in 1939 (the year of the prologue, which looks back to the Day of the Dead just twelve months before); it is also 'the worse one in the Cabbala, the still unmentionably worse one in the Qliphoth, or simply down the drain, according to taste.'

Symbol-hunting could turn into a post- graduate sport if Lowry had not got in first. Laruelle goes to the local cinema during a thunderstorm and Las Manos de Orlac (the film comes from Germany; the poster shows blood-stained hands) symbolises the guilt of mankind. In a similar storm Geoffrey Firmin releases a panic-stricken horse, which finally kills Yvonne, the wife who has come back to him. The careful planting of symbols and correspon- dences inevitably recalls Ulysses, but I think it would be wrong to call Lowry (as some critics have done) a disciple of Joyce. What it seems to me Lowry wrote is the kind of novel that Conrad Aiken wanted to write but lacked the architectonic skill to make structurally satisfy- ing. Of course, Blue Voyage, Great Circle and King Coffin have such Joycean elements as in- terior monologue and recondite literary allusion, but they lack the Joycean lust for form. Lowry's first letter in this published selection is one he wrote at the age of nineteen to Aiken, and admiration for Aiken's work leads him not to the postures of the disciple but to the conversion of the master into a genuine father-figure. The father, as Stephen Spender indicates in his excel- lent introduction to the new edition of Under the Volcano, has to be destroyed by the son: this is one of the conditions of his own act of creation. But the superiority of Lowry's book to any of Aiken's lies, among other things, in the fact that, where Aiken produced Prufrock figures, small Hamlets, Lowry created in Geoffrey Fir min a giant character whose sloth or accidie ironically suggests the Promethean rebel, whose

total alienation from life etches the desired oppo- site, whose inability to love defines what love is. Frain is perhaps the last exemplar of one of the forms of Liberal Man. He is civilise4 sensitive, idealistic, and he cannot survive in the world of the ravine, dominated by the hands of Orlac. He stands in a phase of history which' is also valid as myth, with the carious Mexico of Graham Greene mirroring the torn Spain of all the intellectuals of the 'thirties. Firmin is diseased, but the remedy sometimes seems to be in his own hands: he is an exact symbol of Europe.

At the same time, he is a human being who, though he contains within himself a picture gallery of all the tragic heroes, from Oedipus Tyrannus and Philoctetes (the names of two ships in the novel) to Faust and Hamlet, is a fresh tragic creation in his own right, since he is a product of our own period. His situation is hopeless, but he doesn't whine: he even main- tains a courtesy proper to his rank. He doesn't lie in bed like Oblomov, waiting for the end of a regime; he drinks steadily and, through the drink, achieves the poet's or saint's clairvoyance. He knows precisely what is going on. The attain- ment of self-knowledge, however cut off from the ability to act, is seen to be an aspect of the heroic.

Perhaps Firmin's glamour is partly a reflection of Lowry's own. Big though the consul is, he is only one aspect of Lowry : other aspects are to be found in Firmin's half-brother Hugh and in Wilderness, the diarist of Through the Panama. Lowry has the glamour of all writers who are both scholars and men of action. He went to sea at the age of eighteen, and Conrad Knicker- bocker tells of trips to, 'Singapore, Shanghai, Kowloon, Penang . . . a gun battle in which he was wounded in the leg, glorious young drink- ing in Yokohama bars, a storm with a dock cargo of snakes, a wild boar, panthers and an elephant.' After Cambridge, life was mostly exile—Paris, New York, Los Angeles, Vancouver, British Columbia and, of course, Mexico.

It was also curiously accident-prone—the loss of the manuscript of his first novel, Ultramarine (he rewrote it from notes), the lucky salvaging of Under the Volcano from fire, his wife's strange illnesses and the even stranger vicissitudes of her own published fiction. Money was short, the houses and log cabins where they lived got them- selves appropriated or razed to the ground. And the struggle to get Under the Volcano published (in his biographical chronology we read: '1941. Under the Volcano refused by twelve pub- lishers and withdrawn from agent, fourth version begun') was, even when critical success came, matched by the twentieth-century writer's hope- less struggle to make ends meet.

But the impression of Lowry we receive from these letters is of a restless, energetic man, in- capable either of Firmin's accidie or his inability to love. He is garrulous, serious, yet given to sell-mockery and a rather old-fashioned courtli- ness. He is one of those writers who, antithetical to Gilbert Pinfold, seem quite willing to write a student's thesis for him (American English departments were on to Lowry's importance pretty early). He knew the worth of Under the Volcano, was earnest about it but never pompous. The time is coming for a detailed appraisal of his later book, Hear Us 0 Lord from Heaven Thy Dwelling Place. It seems to me as remark- able, in its different way, as Under the Volcano, yet sensible reaction to -it looks like being as long delayed. But that Lowry is one of the great dead major novelists there can no longer be any doubt.