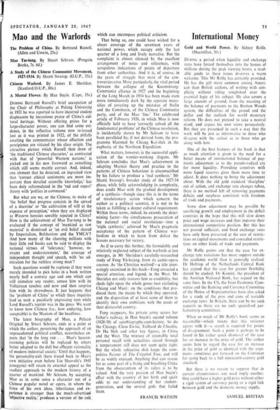 DURING a period when liquidity and exchange rates have forced themselves into the homes of millions during the peak viewing hours, a read- able guide to these issues deserves a warm welcome. This Mr Rolfe has certainly provided. He has the gift more common among Ameri- can than British authors, of writing with sim- plicity without riding roughshod over the essential logic of his subject. He also covers a large amount of ground, from the meaning of the balance of payments to the Bretton Woods system, the difficulties of the pound and the dollar and the outlook for world monetary reform. He does not pretend to take a neutral stand, and argues his own views persuasively. But they are presented in such a way that the work will be just as informative to those who disagree with the author as to those who go along with him.

One of the best features of the book is that as much attention is given to the need for a better means of international balance of pay- ments adjustment as to the pseudo-radical cry for more liquidity. Providing countries with more liquid reserves gives them more time to adjust. It does nothing to bring the adjustment about. With the old gold standard 'discipline' out of action, and exchange rate changes taboo, there is no method left of removing payments deficits and surpluses consistent with freedom of trade and payments.

Some slow adjustment may be possible by sacrificing growth and employment in the deficit countries in the hope that this will slow down price and wage increases and thus improve their international competitive position. But this has not proved sufficient, and fixed exchange rates have only been preserved at the cost of restric- tions on capital movements and concealed restric- tions on other kinds of trade and payments.

Mr Rolfe points out that the case for ex- change rate variations has more support outside the academic world than is generally realised. Dr Holtrop of the Netherlands Central Bank has argued that the case for greater flexibility should be studied. Dr Kamitz, the president of the Austrian National Bank, has argued on the same lines. In the US, the Joint Economic Com- mittee and the Banking and Currency Committee of the House of Representatives have also asked for a study of the pros and cons of variable exchange rates. In Britain, there can be no such requests as there are no such specialised par- liamentary committees.

But there is no reason to suppose that in current circumstances one need imply another. One could have a higher gold price without either a rigid system of currency parity or a rigid link between gold and the domestic money supply.