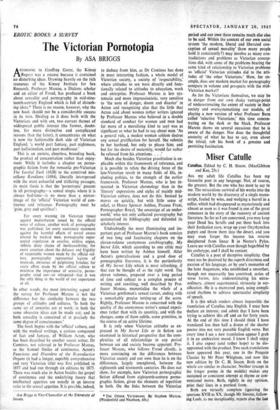 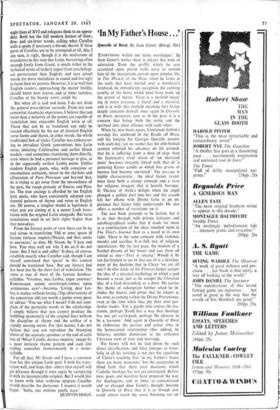 Au. my adult life Catullus has been my favourite poet in any language. Not, of course, the greatest. But the one who has most to say to me. The miraculous survival of his works into the modern world by the discovery of a single manu- script, fouled by wine, and wedging a barrel in a cellar, which had disappeared as mysteriously and almost as soon as it was found is one of the great romances in the story of the recovery of ancient literature. So far as I am concerned, you may keep your Dead Sea Scrolls and put them back into their Jordanian cave, wrap up your Oxyrhynchus papyri and throw them into the desert, and you may even forget the income tax returns deciphered from linear B in Nestor's Pylos. Leave me with Catullus even though begarbled by his archetype, and I shall be content.

Catullus is a poet of deceptive simplicity. One must not be deceived by the superb directness and passion of his language, or by one's memories of the later Augustans, who established a smoother, though not necessarily less contrived, series of verse forms, into underestimating his extra- ordinary, almost supernatural, virtuosity in ver- sification. He is a mannered poet, using compli- cated rhythms to achieve spectacular simplicity of speech.

It is this which renders almost impossible the translation of Catullus into English. I must here declare an interest, and admit that I have been trying to achieve this off and on for forty years. At the end of this time I should think I have translated less than half a dozen of the shorter poems into not very passable English verse. But every time I see a new translation appear I grab it in an ambivalent mood. I know I shall enjoy it. I also expect (and rather hope) to be dis- appointed with the product. Two such translations have appeared this year, one in the Penguin Classics by Mr Peter Whigham, and now this new edition by Dr C. H. Sisson. Both on the whole are similar in character. Neither (except in the longer poems in the middle) makes any sustained or consistent attempt at rhyme or con- ventional metre. Both, rightly in my opinion, print their lines in a poetical form.

Both are virtually complete (ignoring the spurious XVII to XX. though Mr Sissons, follow- ing Loeb, to me inexplicably, rejects also the last eight lines of XVI and relegates them to an appen- dix). Both use the full modem licence of four-, five- and six-letter words, calling what Catullus calls a spade if necessary a bloody shovel. If these parts of Catullus are to be attempted at all, this, I am sure, is right, though it is the misfortune of translators in this vein that Latin, borrowing often enough freely from Greek, is much richer in the technical terms of lechery (apart from psychologi- cal perversions) than English, and uses actual words far more melodious in sound and less ugly in form than we possess. However, it is as well that English readers, approaching the matter freshly, should know how coarse, and at times tasteless, Catullus at his bawdy worst could be.

But when all is said and done, I do not think

the general prescription succeeds. From my own somewhat traumatic experience, I believe that not more than a minority of the poems are capable of translation into enjoyable English verse at all. Those that can be so translated can only be treated effectively by the use of classical English verse forms and rhyme, in other words, the whole traditional box of tricks. Catullus was endeavour- ing to introduce Greek conventions into Latin verse, imitating Callimachus and earlier Greek models—and sometimes translating them directly, even where he had a personal message to give, as in the supposedly earliest Lesbia poem. Unlike modem English poets, who, with conscious or unconscious archaism, revert to the rhythms and alliteration of Piers Plowman and beyond that, he is trying to get away from the uncouthness of the past, the rough prosody of Ennius and Plau- tus. The true analogy is afforded by the English lyric poets, who have consistently adapted con- tinental patterns of rhyme and verse to English use. Of course, a rougher model is legitimate if what you are aiming at is a newer Loeb trans- lation with the original Latin alongside. But verse translations need to set their sights higher than that nowadays.

From the literary point of view there can be no real virtue in translating 'Odi et amo; quare id faciam fortasse requiris/Nescio, sed fieri sentio et excrucior,' as does Mr Sisson, by 'I hate and love. You may well ask why I do so./I do not know. But I feel it and suffer.' It does, of course, establish exactly what Catullus said, though I am myself convinced that 'quare' in this context should be translated 'how.' But any literary feel has been lost by the sheer fact of translation. The same is true of most of the famous hendeca- syllables. `Vivamus, mea Lesbia, atque amemus/ Rumoresque senum severiorum/omnes unius aestimemus assis'—becomes 'Living, dear Les- bia, is useless without loving./Tike observations of the censorious old/are worth a penny every piece of advice.' You see what I mean? I do not com- plain of the particular words or the scholarship. I simply believe that you cannot produce the bubbling spontaneity of the original lines without the discipline of rhyme and the artifice of a rapidly moving metre. For that matter, I do not believe that you can reproduce the thumping blows of the scazonic spondees at the end of each line of 'Miser Catulle, desinas ineptire,' except by a most intricate rhyme pattern and each line ending somewhat monotonously in a mono- syllable.

For all that, Mr Sisson and I have a common love for this unique Latin poet. I wish his trans- lation well, and hope that others than myself will get pleasure through it once again by comparing it with its incomparable original. But I would like to know with what scabrous epigram Catullus would describe the dustcover. I suspect it would begin: 'Salve, nec minimo puella naso.'