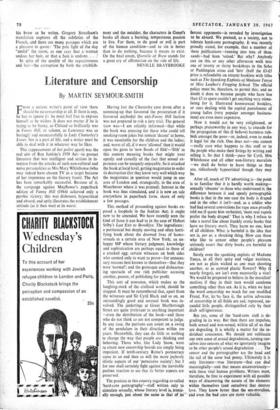 FROM a serious writer's point of view there should be no censorship at all. If there is any, he has to ignore it : he must feel free to express himself as he wishes. It does not matter if he is trying to be funny, as Cleland so brilliantly was in Fanny Hill, or solemn, as Lawrence was so boringly and unsuccessfully in Lady Chatterley's Lover. Sex is a part of life, and a writer must be able to deal with it in whatever way he likes.

This (appeasement of hoi polloi apart) was the real aim of Roy Jenkins's 1959 Act—to protect literature that was intelligent and serious in in- tention from the attacks of such non-cultural and naive personalities as Mrs Mary Whitehouse (who may indeed have chosen TV as a target because of her impotence on the literary front). The Act has been remarkably successful. Because of it, the campaign against Mayflower's paperback edition of Fanny Hill (1964) achieved only a pyrrhic victory; this was dishonest, hypocritical and absurd, and aptly illustrates the establishment attitude (as it then was) at its worst.

Having lost the Chatterley case (even after a summing-up that favoured the prosecution if it favoured anybody) the anti-Fanny Hill faction was not prepared to risk a jury trial. The general view was—I am reliably informed—that while the book was amusing for those who could tell smoking-room jokes but remain 'decent' at home, it was unsuitable for the children and the ladies; and, worst of all, if it were 'allowed' then it would open the gates to 'new floods of filth'—'filth' in this context meaning books that might treat openly and casually of the fact that sexual ex- perience can be uniquely enjoyable. So it attacked the book at local level, getting magistrates to order its destruction (for they knew very well which way the magistrates in question would jump in one area of London and, strategically, in the area of Manchester where it was printed). Interest in the book was thus stimulated, and it is now on sale everywhere in paperback form, shorn of only a few passages.

This method of proceeding against books ex- posed a loophole in the Jenkins Act; it ought now to be amended. We have recently seen the kind of farce it can lead to in the case of Hubert Selby's Last Exit to Brooklyn. The ingredients: a puritanical but deeply moving and often horri- fying book about the doomed lives of homo- sexuals in a certain area of New York; an un- happy MP whose literary judgment, knowledge and sophistication are perhaps equal to those of a cracked egg; certain witnesses on both sides who seemed only to want to prove—for unneces- sary reasons best known to themselves—that they were `normal'; and the grotesque and dishearten- ing spectacle of one rich publisher accusing another, poorer, of publishing for profit.

This sort of nonsense, which makes us the laughing-stock of the civilised world, should be stopped. It must be remembered that, apart from the witnesses and Sir Cyril Black and so on, an outstandingly good and unusual book was in- volved. The junketings at Great Marlborough Street are quite irrelevant to anything important —even the distribution of the book—and those who do not think so are not competent to judge. In any case, the puritans can count on a swing of the pendulum in their direction within ten years. Meanwhile, they can do little or nothing to change the way that people are thinking and behaving. Those who, like Lady Snow, want to create new censorship boards are simply being impatient. If tenth-century Rome's pornocracy came to an end then so will the more joylessly idiotic aspects of our 'permissive society'; but I for one shall certainly fight against the inevitable puritan reaction to see that its better aspects are preserved.

The position in this country regarding so-called 'hard-core pornography'—stuff written only to stimulate sexually, whose literary level is, ironic- ally enough, just about the same as that of its ' fiercest opponents—is revealed by investigation to be absurd. We pretend, as a society, not to tolerate hard-core pornography. It was recently proudly stated, for example, that a number of these publications—running into tens of thou- sands—had been 'seized.' But why? Anybody can on this or any other afternoon walk into one of twenty or thirty bookshops in the Soho or Paddington areas and 'hire' (half the £3-£5 price is refundable on return) booklets with titles such as The Spanking Exploits of Madame Tanya or Miss Leather's Flogging School. The official policy must be, therefore, to permit this; and no doubt it does so because people who have less than £3 to spare couldn't get anything very stimu- lating for it. Illustrated homosexual booklets, or ones dealing with the capital punishment of young ladies (very popular amongst business- men) are even more expensive.

Now it would not be very enlightened, or perhaps praiseworthy in any way, to crusade for the propagation of this (I believe) harmless rub- bish amongst the poor—or, indeed, even to make it legal for the rich. One does not—one cannot —really care what happens to this stuff or to the people who make their livings by writing and selling it. So that I think—pace Sir Cyril, Mrs Whitehouse and all other non-literary moralists —we shall do better to leave things as they are, ridiculously hypocritical though they may be.

After all, much of TV advertising is—the point is so familiar that it is hardly worth making— sexually 'obscene' to those who understand it; the difference between it and openly pornographic books is that in the one case the body is draped and in the other it isn't—and, as a soldier who had had several convictions for rape once proudly told me (I quote him verbatim), 'most real rapists prefer the body draped.' That is why I refuse to take a moral line about frankly erotic books that have no literary merit. They harm no one, least of all children. What is harmful is the idea that sex is, per se, a shocking thing. How can those who like to censor other people's pleasure seriously assert that dirty books are harmful to children?

Surely even the spanking exploits of Madame Tanya, in all their spicy and vulgar nastiness, are not as plain wicked as one man shooting another, or as scented plastic flowers? Why (I nearly forgot), sex isn't even necessarily a vice! We would be prepared to believe in the moralists' motives if they in their turn would condemn something other than sex. As it is, when we hear the word censorship we reach for our modified Freud. For, let 'Us face it, the active advocates of censorship in all fields are sad, repressed, un- candid little people, distinguished only by their drab self-ignorance.

But yes, some of the 'hard-core stint is de- grading in its way. But then there are impulses, both sexual and non-sexual, within all of us that are degrading. It is wholly a matter for the in- dividual conscience. We should not sublimate our own sense of sexual degradation, turning our- selves into censors of what we ignorantly imagine to be other people's sexual degradation . . . The censor and the pornographer are the head and the tail of the same bad penny. Ultimately it is only literature—true literature—that can deal meaningfully—and that means uncensoriously- with these vital human problems. Writers must, therefore, be free to experiment with all possible ways of discovering the nature of the elements within themselves (and ourselves) that destroy love. They know better than the sex-moralists, and even the bad ones are more valuable.