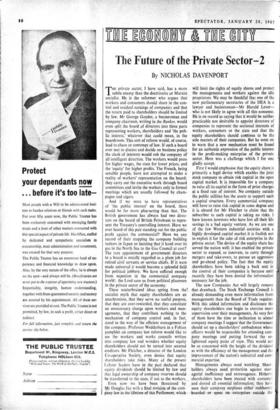 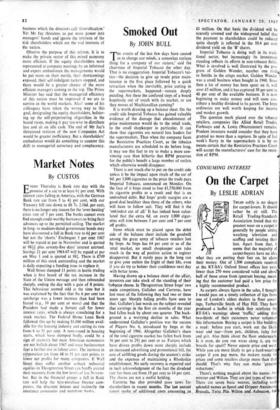 PHE private sector, I have said, has a more I subtle enemy than the doctrinaire or Marxist socialist. He is the reformer who argues that workers and consumers should share in the con- trol and residual earnings of companies and that the return paid to shareholders should be limited by law. Mr George Goyder, a businessman and company chairman, writing in the Banker, would even split the board of directors into three parts representing workers, shareholders and 'the pub- lic interest,' whatever that could mean, in the boardroom. This sort of reform would, of course, lead to chaos or contempt of law. If such a board ever met to discuss and decide on business policy the clash of interests would rob the company of all intelligent direction. The workers would press for higher wages, the state for lower prices, and the `equity' for higher profits. The French, being sensible people, have not attempted to make a reality of workers' representation on the board; they carry out the executive work through board committees and invite the workers only to formal meetings which are usually followed by cham- pagne and cigars.

And if we were to have representatives of `the public interest' on the board, there would be far more play-acting than that. The British government has always had two direc- tors on the board of British Petroleum to repre- sent the Treasury's controlling interest. Have we ever heard of this pair standing out for the public profit against the commercial? Have we any record of their stopping the company building tankers in Japan or insisting that it hand over its gas in the North Sea to the Gas Council at cost? The rare appointment of government directors to a board is usually regarded as a plum job for retired civil servants or service chiefs. If it were made universal it would become a splendid field for political jobbery. We have suffered enough from nepotism in the commercial company world : the Lord save us from political placemen in the private sector of the economy.

These scatterbrained ideas spring from the socialist myth that equity shareholders are an anachronism, that they serve no useful purpose, that they are over-rewarded, that they constitute an unnecessary charge upon workers and man- agements, that they contribute nothing to the mechanism of company control and, in fact, stand in the way of the efficient management of the company. Professor Wedderburn in a Fabian pamphlet on company law reform would like to see the workers and works councils written into company law and wonders whether equity shareholders should not be turned into secured creditors. Mr Fletcher, a director of the London Co-operative Society, even denies that equity shareholders take risks. Many of the present Labour leaders have in the past declared that equity dividends should be limited by law and that legal ownership of company reserves should be transferred to the state, if not to the workers.

Even now we have been threatened by Mr Douglas Jay with a final revision of the com- pany law in the lifetime of this Parliament, which

will limit the rights of equity shares and protect the managements and workers against the idle proprietors. We may be thankful that one of the new parliamentary secretaries of the DEA is a lawyer and businessman—Mr Harold Lever— who is not likely to agree with all this nonsense. He is on record as saying that it would be neither practicable nor desirable to appoint directors of companies to represent the sectional interests of workers, consumers or the state and that the equity shareholders should continue to be the sole masters of their companies. But he went on to warn that a new mechanism must be found for an authentic expression of the public interest in the profit-making enterprise of the private sector. Here was a challenge which I for one gladly accept.

First I would emphasise that the equity share is primarily a legal device which enables the joint stock company to obtain risk capital in the open capital market. It is impossible for a company to raise all its capital in the form of prior charges at a fixed rate of interest. No company outside the public utilities has the assets to support such a capital structure. Every commercial company will have to raise risk capital in some degree and it is absurd for Mr Fletcher to claim that the subscriber to such capital is taking no risks. I have known investors who have lost all their life savings in a bad equity venture, As we are one of the few Western industrial societies with a highly developed capital market it is foolish not to exploit it for the sake of risk enterprise in the private sector. The device of the equity share has served the nation well; it has enabled the private sector to expand, to innovate, to carry through mergers and take-overs, to pursue an aggressive and go-ahead policy. The fact that the equity shareholders have been taking a back seat in the control of their companies is because until recently they have been denied the information necessary for the job.

The new Companies Act will largely remove that drawback. The Stock Exchange Council is already demanding even more information from managements than the Board of Trade requires. With this added information and disclosure the equity shareholders can begin to exercise more supervision over their managements. As very few of them have the time or inclination to attend company meetings I suggest that the Government should set up a shareholders' ombudsman whose officers would be responsible for attending com- pany meetings and putting forward the en- lightened equity point of view. This would not be so concerned with the height of the dividend as with the efficiency of the management and the improvement of the nation's industrial and com- mercial expertise.

Managements always need watching. Share- holders always need protection against man- agerial inefficiency and extravagance. Hitherto shareholders have been treated with contemr and denied all essential information; they ha' seen their company surpluses either stubborn hoarded or- spent on enterprises outside the business which the directors call 'diversification.' Yet Mr Jay threatens to put more power into managers' hands and ignore the interests of the risk shareholders which are the real interests of the nation.

Observe the purpose of this reform. It is to make the private sector of this mixed economy more efficient. If the equity shareholders were represented at company meetings by an informed and expert ombudsman the managements would be put more on their mettle, their shortcomings exposed, their self-indulgent rackets stopped, and there would be a greater chance of the more efficient managers coming to the top. The Prime Minister has said that the managerial efficiency of this nation must be improved if we are to survive in the world markets. Alas! some of his colleagues have taken the wrong way to this goal, denigrating the equity shareholders, bolster- ing up the self-perpetuating oligarchies in the board room, making it pay tax-wise to distribute less and sit on idle cash. The end of Mr Jay's threatened revision of the new Companies Act would be greater inefficiency. But a shareholders' ombudsman would do something to counter this drift to managerial autocracy and complacency.