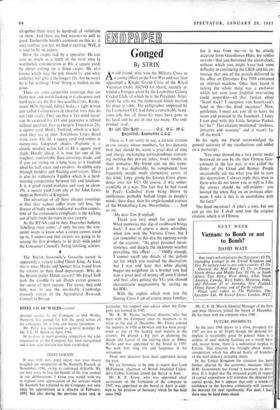 AN old friend, who won the Military Cross as a young officer in the First War and was later appointed a Knight Grand Cross of the Royal Victorian Order (GCVO for short), recently at- tended a banquet given by the Loamshire County Cricket Club, of which he is the President. After- wards he sent me the name-card which marked his place at table. The calligrapher employed by the Loamshire CCC had done a remarkably hand- some job, but all those Cs must have gone to his head and he put in one too many. The end- product read :

There is, I am sorry to say, a certain stratum in our society whose members, far less dynamic than they should be, waste a great deal of time and energy exchanging correspondence contain- ing nothing but private jokes, mock insults or sheer nonsense. My friend sent me this name- card. It was deplorable, he complained, how frequently people made elementary errors of this kind; fancy giving his George Cross prece- dence over his VC! Of course, it was under- standable in a way. The fact that he had saved St Paul's Cathedral from being blown to smithereens probably bulked larger in people's minds, these days, than his single-handed capture of the Hindenburg Line. Nevertheless . . . And so on.

'My dear Tim [I replied]

Thank you very much for your letter. What memories that slip of cardboard brings back! I was of course a mere schoolboy when you won the Victoria Cross, but I can remember to this day the opening words of the citation: "At great personal incon- venience, and despite the inclement weather prevailing, this officer . . ." Oddly enough, I cannot recall any details of the gallant act for which you received the decoration; but I was told later that while playing beggar-my-neighbour in a brothel you had won a great deal of money off your Colonel and that, after getting the VC, you showed characteristic magnanimity by tearing up his IOU.

With the exploit which won you the George Cross I am of course more familiar;

for it was from me—or to be strictly accurate from Guardsman Hipe, my soldier servant—that you borrowed the alarm-clock, without which you might have had some difficulty in convincing the CIGS and his en- tourage that one of the parcels delivered to his office on Christmas Eve 1939 contained an infernal machine. Once they heard it ticking the whole thing was a pushover which not even your frightful over-acting could jeopardise—all that fustian about "Stand back! I recognise von Sauerkraut's hand in this—the fiend incarnate! Now, gentlemen, I must ask you all to leave the room and proceed to the basement. I fancy I can deal with this Little Surprise Packet, ha! ha!" That citation mentioned "coolness, initiative and resource" and it wasn't far off the mark.'

In his reply my friend acknowledged the general accuracy of my recollections and added in a postscript: 'You once showed me a very pretty medal bestowed on you by the then Chinese Gov- ernment in the last war; it was called the Order of the Cloud and Banner. People occasionally ask me what you did to earn this decoration. I always reply that, even to those who do not know you as well as I do, the answer should be self-evident: you hoisted the white flag on an overcast after- noon. I take it this is in accordance with the facts?'

The fiend incarnate! A joke's a joke, but one can go too far. I shall send him the original citation, which is in Chinese.