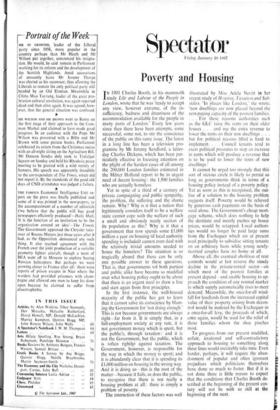 IN 1901 Charles Booth, in his mammoth study Life and Labour of the People in London, wrote that he was 'ready to accept any view, however extreme, of the in- sufficiency, badness and dreariness of the accommodation available for the people in many parts of London.' Every few years since then there have been attempts, some successful, some not, to stir the conscience of the public on this same issue. The latest in a long line has been a television pro- gramme by Mr Jeremy Sandford, a latter- day Charles Dickens, which has been par- ticularly effective in focusing attention on the plight of the hardest cases of all among the 200,000 London families estimated in the Milner Holland report to be in urgent need of decent housing: the 1,500 families who are actually homeless.

Yet in spite of a third of a century of private campaigning and public sympathy, the problem, the suffering and the shame remain. Why? Why is it that a nation that legitimately considers itself to be a welfare state cannot cope with the welfare of such a small and obviously needy section of its population as this? Why is it that a government that now spends some £1,000 million a year on housing (if local authority spending is included) cannot even deal with the relatively trivial amounts needed to house the homeless? The situation is so tragically absurd that there can be only one possible answer to these questions. That is, that governments (of both parties) and public alike have become so muddled over what housing policy ought to be about that there is an urgent need to draw a line and start again from first principles.

In the first instance, the well-housed majority of the public has got to learn that it cannot salve its conscience by blam- ing the Government for 'not doing enough.' This is not because governments are always right—far from it. It is simply that, in a full-employment society at any rate, it is not government money which is spent, but the public's, through taxation: and it is not the Government, but the public, which is (often rightly) against taxation. The Government, however, is responsible for the way in which the money is spent; and it is abundantly clear that it is spending its £1,000 million on housing in the wrong way.

And it is doing so—this is the root of the matter—because it fails, as does the public, to recognise that there is not really a housing problem at all: there is simply a problem of poverty. The interaction of these factors was well illustrated by Miss Adela Nevitt in her recent study of Housing. Taxation and Sub- sidies. 'In places like London,' she wrote, `new dwellings are now placed beyond the rent-paying capacity of the poorest families.

but for political reasons Ithisl is hard to implement. . . . Council tenants tend to exert political pressures to stop an increase in rents which will produce a revenue that is to be used to lower the rents of new dwellings.'

It cannot be urged too strongly that this sort of vicious circle is likely to persist so long as governments think in terms of a housing policy instead of a poverty policy. Yet as soon as this is recognised, the out- line of a solution to the housing problem suggests itself. Poverty would be relieved by generous cash payments on the basis of need alone. The Government's cheap mort- gage scheme, which does nothing to help the destitute and merely pushes up house prices, would be scrapped. Local authori- ties would no longer be paid large sums from the Exchequer which are at present used principally to subsidise sitting tenants on an arbitrary basis while young newly- married couples have no home at all.

Above all, the eventual abolition of rent controls would at last reverse the steady decline in the private-rented sector—on which most of the poorest families at present depend—and enable housing to ap- proach the condition of any normal market in which supply automatically rises to meet demand. Meanwhile, the once-for-all wind- fall for landlords from the increased capital value of their property arising from decon- trol would be mulcted by the Exchequer in a once-for-all levy, the proceeds of which, once again, would be used for the relief of those families whom the shoe pinches most.

To progress from our present muddled, unfair, irrational and self-contradictory approach to housing to something along these lines would inevitably take time. Even harder, perhaps, it will require the aban- donment of popular and often ignorant prejudices which politicians themselves have done so much to foster. But if it is not done there is little reason to expect that the conditions that Charles Booth de- scribed at the beginning of the present cen- tury will not be with us still at the beginning of the next.