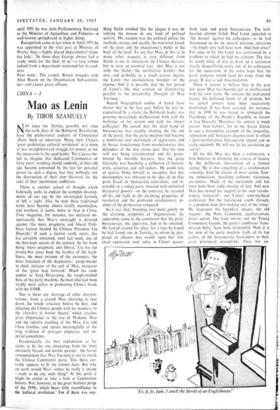 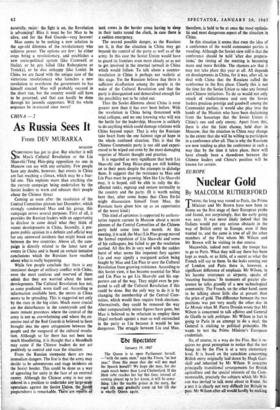 NOT since the 'thirties, possibly not since the early days of the Bolshevik Revolution, have the professional students of Communist affairs been so uncertain. Many view China's 'great proletarian cultural revolution' as a more or less straightforward struggle for power, or for the succession to the aged leader. Yet it passes be- lief to imagine that dedicated Communists of forty years' standing should suddenly, in their old age, become consumed by the lust for personal power to such a degree that they willingly risk the destruction of their own life-work for the sake of their incontinent ambitions.

There is another school of thought which habitually seeks to explain the complex develop- ments of our age by the stereotyped formula of left v. right. Alas, by now these traditional terms have become almost totally meaningless, and nowhere, it seems, more so than in China. Time magazine, for instance, has declared un- equivocally that Mao's onslaught is directed against 'the more pragmatic and liberal Polit- buro faction headed by Chinese President Liu Shao-chi.' If such a faction really exists, this has certainly remained, until last week, one of the best-kept secrets of the century. So far from being 'more pragmatic and liberal,' Liu has for twenty-five years been the hardest of the hard- liners, the most extreme of the extremists, the most fanatical of the dogmatists: purge-master in chief, initiator of the cult of Mao, instigator of the 'great leap forward.' Much the same applies to Teng Hsiao-ping, the tough-minded boss of the party machine, the man who had been visibly most active in promoting China's break with the USSR.

Nor is there any shortage of other interpre- tations; from a crazed Mao choosing to tear down the whole structure before he dies, and infecting the Chinese people with his madness, to the 'cherchez la femme theory,' which attaches great importance to the rise of Madame Mao and the relative standing of the Mao, Liu and Chou families, and speaks meaningfully of the long tradition of dowager empresses and im- perial concubines.

Paradoxically, the best explanation so far seems to be the one emanating from the most obviously biased and hostile quarter: the Soviet announcement that Mao Tse-tung is out to smash the Chinese Communist party. This thesis cer- tainly appears to fit the known facts. But why on earth would Mao—unless he really is insane —want to do any such thing? At this point it might be useful to take a look at Communist history. Not, however, at the great Stalinist purge of the 1930s, which bears little resemblance to the 'cultural revolution.' For if there was any-

thing Stalin avoided like the plague it was in- volving the masses in any kind of political activity. His weapon was the political police, his methods secrecy and stealth, the nocturnal knock on the door and the executioner's bullet in the back of the head. To say that Mao, in this as in many other respects, is very different from Stalin, is not to whitewash the Chinese dictator, but to state an essential fact: that Mao is not only the Stalin—the totalitarian builder—but also, and probably to a much greater degree, the Lenin—the revolutionary founder—of the regime. And it is possible that the last period of Lenin's life may contain an illuminating parallel to the present-day Thought of Mao Tse-tung.

Recent biographical studies of Lenin have shown that in the last year before he was in- capacitated by a stroke the Bolshevik leader was growing increasingly disillusioned, both with the workings of his system and with his closest colleagues. He sensed that the dead hand of bureaucracy was steadily choking the life out of the party; that the party machine had become a monstrous new instrument of oppression, and its bosses transformed from revolutionaries into defenders of the new status quo; that his own will was being circumvented and his power limited by invisible barriers; that the party hierarchy was becoming a collection of bureau- crats, careerists and self-seekers. He could not, of course, bring himself to recognise that this development was inherent in his idea of an elite party based on 'democratic centralism,' and in- evitable in a ruling party invested with unlimited dictatorial powers—on the contrary, he retained all his old faith in the cleansing properties of revolution and the profound revolutionary in- stinct of the proletarian vanguard.

So it was that, brooding ever more grimly on the alarming symptoms of 'degeneration,' he apparently came to the conclusion that the party bureaucracy, the apparatus, had to be smashed. He looked around for allies; for a time he hoped he had found one in Trotsky, to whom he pro- posed an alliance that would 'open fire' (the exact expression used today in China) against both state and party bureaucracy. The half- hearted attempt failed. Had Lenin appealed to 'the masses' against his colleagues—as he had threatened to do on several previous occasions —he might very well have won. And then what?

For once in his life Lenin was confronted by a

problem to which he had no solution. The best he could think of was to draw up a testament clearly disqualifying every one of his colleagues for the succession, in the naïve hope that the party congress would heed his voice from the grave. It was a sad miscalculation.

There is reason to believe that in the past few years Mao has become just as disillusioned with his own party. He remains the undisputed leader, the hallowed fount of all wisdom, but his actual powers have been successively diminished. It has been revealed, for instance, that in 1958 he was forced to relinquish the Presidency of the People's Republic in favour of Liu Shao-chi. Moreover, his anxiety is much greater than Lenin's, for in the Soviet Union he sees a horrendous example of the inequality, oppression and 'bourgeois degeneration' to which a post-revolutionary bureaucratic regime can so easily_ succumb. He will not let his revolution go astray!

All his life Mao has been a voluntarist, a firm believer in changing the course of history by the deliberate intervention of a human agency. He is also something of a revolutionary romantic, fired by visions of mass action, flam- ing enthusiasm, marching columns, victorious encounters. Much of the excitement and fun must have been sadly missing of late. And now Mao has turned for support to his own 'revolu- tionary vanguard': not Lenin's semi-mythical proletariat, but the fanaticised youth (though, as a prudent man, first making sure of the army). He resurrects the legendary images, the old slogans: the Paris Commune, egalitarianism, direct action. The trade unions and the Young Communist League, the party's cumbrous 'trans- mission belts,' have been dismantled. Now it is the turn of the party machine itself, of its top cadres, of the bureaucratic backsliders in their great provincial strongholds. They, not on- 'Fe, fi, fo, turn, I smell the blood of an Litgli naturally, resist: the fight is on, the Revolution is advancing! Bliss it must be for Mao to be alive, and for the Red Guards—very heaven!

Mao seems to be seeking a new solution to the age-old dilemma of the revolutionary who achieves power. The options are few : he either stops being a revolutionary, and establishes a new socio-political system (like Cromwell or Stalin), or he gets killed (like Robespierre or Trotsky), or he dies unhappy (like Lenin). In China we are faced with the unique case of the victorious revolutionary who launches a new revolution to overthrow the government he has himself created. Mao will probably succeed in the short run, but the country would still have to be governed, and that can hardly be done through his juvenile supporters. Will the whole sequence be re-created once more?