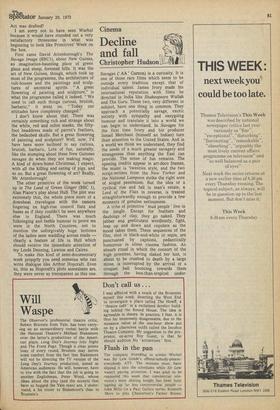 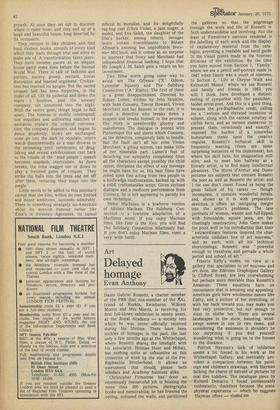 Savages (' AA ' Curzon) is a curiosity. It is one of those rare films which seem to be outside every tradition except that of individual talent. James Ivory made his international reputation with films he directed in India like Shakespeare Wallah and The Guru. These two, very different in subject, have one thing in common. They approach a potentially savage, exotic society with sympathy and easygoing humour and translate it into a world we can begin to understand. In Savages for the first time Ivory and his producer Ismail Merchant (himself an Indian) turn their attention to the United States. And in a world we think we understand, they find the seeds of a much greater savagery and strangeness than anything the East can provide. The sense of fun remains. The opening credits appear in art-deco frames, the music is 'twenties style, and the two script-writers from the New Yorker and the National Lampoon strike the right note of soigné pessimism. But the idea of a cyclical rise and fall in man's estate, a Lord of the Flies in reverse, is treated straightforwardly enough to provide a few moments of genuine seriousness.

A tribe of primitive 'mud people ' live in the jungle. Except for feathers and daubings of clay, they go naked. They jabber and gesticulate wordlessly, fight, leap up and down and copulate as the mood takes them. These sequences of the film, shot in black-and-white or sepia, are punctuated by captions, pedantically humorous in silent cinema fashion. An absurb ritual in which the consort of the high priestess, having slaked her lust, is

about to be crushed to death by a large stone, is interrupted by the arrival of a croquet ball bouncing towards them through the less-than-tropical under growth. At once they set out to discover where it came from, and they end up at a large and beautiful house, long deserted, by its occupants.

They venture in like children and find food, clothes, books, utensils of every kind which they learn through trial and error to make use of. A transformation takes place. They have become guests at an elegant house party some time before the Second World War. There is talk of fashions and politics, society gossip, recitals, trivial discussion and learned argument. Civilisation has reached its apogee. But the sacred croquet ball has been forgotten, in the midst of all. Off its pedestal and down the stairs it bounces, past the unwary company, out unnoticed into the night. With the centre gone, things begin to fall apart. The hostess is rudely interrupted; non sequiturs and unfinished snatches of quotation replace the ordered conversation; the company disperses and begins to dance drunkenly; blows are exchanged; some go into the dark to copulate, others watch disinterestedly as a man drowns in the swimming pool; ceremonies of drugtaking and sexual exhibitionism cast back to the rituals of the ' mud people '; speech becomes slapdash, inarticulate. As dawn breaks, the tribe stagger out of doors to play a frenzied game of croquet. They strike the balls into the trees and set off after them, retracing their steps into the jungle.

Little needs to be added to this summary except that the film, within its own limited and minor ambitions, succeeds admirably. There is something strangely un-American about its donnish humour rather like Eliot's in Sweeney Agonistes, its casual refusal to moralise, and its delightfully rag-bag cast (Ultra Violet, a jazz singer, a model, and Eva Saleh, the daughter of the film's backer, among others). Savages bears certain resemblances to Robert Altman's amusing but unprofitable Brewster McCloud, and it comes as no surprise to discover that Ivory and Merchant had independent financial backing. I hope that Mr Joseph J. M. Saleh gets a return on his investment.

Two films worth going some way to avoid are The Offence ('X' Odeon, Leicester Square) and The Salzburg Connection (' A ' Rialto). The first of these is a great disappointment. Directed by Sidney Lumet, written by John Hopkins, with Sean Connery, Trevor Howard, Vivien Merchant and Ian Bannen in the cast, it is about a detective who breaks down a suspect and breaks himself in the process. The story is unrelievedly gloomy and malodorous. The dialogue is jointed with Pinteresque fits and starts which Connery, as the detective, completely fails to handle. But the fault isn't all his: even Vivien Merchant, a gifted actress, can make little of her miserable part. Lumet's feat of detaching our sympathy completely from all the characters except possibly the child rapist, dissipates the effect of any message he might have for us. His best films have relied upon fine acting from two people in a knife-edge confrontation, backed up with a solid, craftsmanlike script. Given stylised dialogue and a mediocre performance from Connery, he is left appearing to parody his own technique.