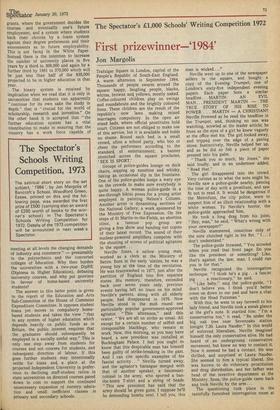 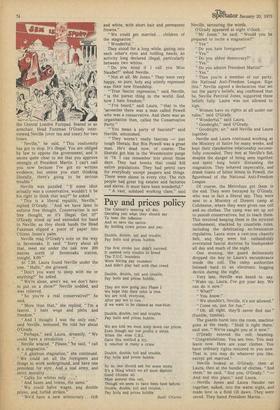 Trafalgar Square in London, capital of the People's Republic of South-East England. A warm afternoon in September 1984. Thousands of people swarm around the square: happy, laughing people, blacks, whites, browns and yellows, mostly naked. Coffee-coloured children play on swings and roundabouts and the brightly coloured lions. These children are the result of the republic's new laws making mixed marriages compulsory. In the open air stand beds, where official prostitutes hold court. Citizens are not obliged to make use of this service, but it is available and holds no shame. Round each bed is a small crowd, often a school party, who boo or cheer the performers according to the standard of entertainment; a banner stretched across the square proclaims, 'SEX IS SPORT.'

Groups of police-guides lounge on deck chairs, sopping up sunshine and whisky, taking an occasional dip in the fountains.

One of the police-guides keeps a wary eye on the crowds to make sure everybody is quite happy. A woman police-guide in a see-through bikini poses for a young artist employed in painting Nelson's Column.

Another artist is dynamiting sections of the National Gallery, a work sponsored by the Ministry of Free Expression. On the steps of St Martin-in-the-Fields, an abortion clinic, a famous pop group are giving a free dhow and handing out copies of their latest record. The sound of their nuclear-powered amplifiers competes with the shouting of scores of political agitators in the square ...

Neville Jones, a sallow young man, worked as a clerk at the Ministry of Satire. Born in the early 'sixties, he was a young boy at the time of the revolution. He was brainwashed in 1977, just after the partition of England into five separate states. His memory, therefore, extended back over seven years only, previous events having left no trace on his mind.

Neville's parents, along with all elderly people, had disappeared in 1976. Now Neville stood in the mob round one particularly popular government-approved agitator. "This afternoon," said this orator, "We are all on strike as usual. All except for a certain number of selfish and irresponsible blacklegs, who remain at work. Now, this morning, as you may have heard, a new president was installed, at Buckingham Palace. I feel you ought to know that this despicable man has himself been guilty of strike-breaking in the past. And I can cite specific examples of his fascist activity ..." Neville turned away, and the agitator's harangue merged with that of another speaker, a lieutenant colonel in the army, who sported a banthe-bomb T-shirt and a string of beads. " This new president has said that the army should be given guns; I suppose he'll he demanding bombs next. I tell you, this man is wicked ..."

Neville went up to one of the newspaper sellers in the square, and bought a copy of the Evening Trumpet, one of London's sixty-five independent evening papers. Each paper bore a similar

headline ... MARTIN: AN EVIL MAN ... PRESIDENT MARTIN — THE TRUE STORY OF HIS RISE TO POWER. . . MARTIN — A CHRISTIAN!! Neville frowned as he read the headline in the Trumpet, and, thinking no one was watching, scowled at the leader article; he froze as the eyes of a girl he knew vaguely at the office met his. The girl looked away, and tripped over the edge of a paving stone. Instinctively, Neville helped her up, and as he did so felt a piece of paper pressed into his palm.

"Thank you so much, Mr Jones," she said loudly, and in an undertone added, "Read that."

The girl disappeared into the crowd. Very curious as to what the note might be, Neville saw a police-guide nearby, passing the time of day with a prostitute, and saw fit not to read it. It would be dangerous if the Metrofuzz, the city police, were to suspect him of an illicit relationship with a white woman. To Neville's horror, the police-guide approached 'him.

He took a long drag from his joint; "Hey, man," he said, "What's wrong with your newspaper?"

Neville stammered, conscious only of the note clutched tight in his fist. "I ... I don't understand."

The police-guide frowned; "You scowled when you read that front page. Do you like the president or something? Like, that's against the law, man. I could run you in for that."

Neville recognised the interrogation technique. "I think he's a pig ... a fascist pig . . . a reactionary," he said.

"Like baby," said the police-guide, "I don't believe you. I think you'd better come on down to our pad and have a chat with the Head Fuzzman."

With this, he went to say farewell to his lady friend, and Neville took a sneak glance at the girl's note. It startled him: " I'm a conservative too," it read, "Be under the big oak tree near Sevenoaks station tonight 7.30. Laura Nauder." In this world of enforced liberalism, Neville imagined himself the only conservative alive. He had heard of an underground conservative

movement, but knew no way to contact it. Now it seemed he had a contact. He was thrilled, and surprised at Laura Nauder.

She seemed to him a typical liberal. She was known to do voluntary prostitution

and drug distribution, and her father was head of the invective department at the Ministry. Soon, the police-guide came back and took Neville by the arm..,

The questioning took place in the tastefully furnished interrogation room at the Central London Fuzzpad. Seated in an armchair, Head Fuzzman O'Grady interviewed Neville (over tea and toast) for two hours.

Neville," he said, "This conformity has got to stop. It's illegal. You are obliged by law to oppose the government, and it seems quite clear to me that you approve strongly of President Martin. I can't nail you now because I've got no written evidence; but unless you start thinking liberally, there's going to be serious trouble."

Neville was puzzled. "If some idiot actually was a conservative, wouldn't it be his right to think that way?" he asked.

" This is a liberal republic, Neville," replied O'Grady. "And we have laws to enforce free thought. Conservatism is not free thought, so it's illegal. Get it?" O'Grady stood up' and extended his hand to Neville; as they shook hands the Head Fuzzman slipped a piece of paper into Citizen Jones's palm.

Neville read O'Grady's note on the way to Sevenoaks. It said: "Sorry about all that, meet me under the oak tree 200 metres north of Sevenoaks station, tonight, 8.00."

"Don't you want to sleep with me or anything?" he asked.

"We're alone, aren't we, we don't have to put on a show?" Neville nodded, and was relieved.

" More than that," she replied, "I'm a fascist. I hate wogs and plebs and freedom."

" And I thought I was the only one," said Neville, bemused. He told her about O'Grady.

"A glorious stagnation," she continued. "We could set all the foreigners and things to work underground, and have one president for ever. And a real army, and strict morality ...

"And buses and towns, the same."

"We could halve wages, and double prices, and, forbid strikes."

a real conservative?" he We are told, everyone,

and white, with short hair and permanent frowns."

"We could get married ... children of the stagnation."

They stood for a long while, gazing into each other's eyes and holding hands, an activity long declared illegal, particularly between two whites.

"Do you mind if I call you Miss Nauder?" asked Neville.

"Not at all, Mr Jones." They were very happy, so pure, holy and utterly repressed was their new friendship.

" True fascist repression," said Neville, "is the purest thing in the world. God, how I hate freedom."

"I've heard," said Laura, "that in the 'seventies there was a man called Powell who was a conservative. And there was an organisation then, called the Conservative Party."

"You mean a party of fascists?" said Neville, astonished.

"They weren't really fascists — just tough liberals. But t'his Powell was a great man. He's dead now, of course. The liberals got him in the Westminster purge in '74. I can remember lots about those days. They had bombs that could kill entire populations. They had petrol cars for everybody except paupers and things. There were slums in every city. The rich people had great big estates and factories and slaves. It must have been wonderful."

"Mr Jones," he said, "Would you be prepared to incite a stagnation?"

"Do you hate foreigners?"

"Do you abhor democracy?"

"Do you admire President Martin?"

" Yes." ' "Then you're a member of our party, the National Anti-Freedom League. Sign this." Neville signed a declaration that set out the party's beliefs, and confirmed that he, Neville Percival Jones, supported these beliefs fully. Laura was not allowed to sign.

"Women have no rights at all under our rules," said O'Grady.

Neville and Laura continued working at the Ministry of Satire for many weeks, and kept their clandestine relationship successfully concealed. They met at Neville's flat, despite the danger of being seen together, and spent long hours discussing the stagnation. They behaved impeccably, and drank toasts of bitter lemon to Powell, the figurehead of the National Anti-Freedom League.

Of course, the Metrofuzz got them in the end. They were betrayed by O'Grady, who was in fact a liberal spy. They were sent to a Ministry of Dissent camp at Colchester, where they were given one cell and no clothes. The camp was set up not to punish conservatives, but to teach them. This involved keeping them in the strictest confinement, shackled by countle'ss rules, including the debilitating no-fornication regulation. Laura wore a cast-iron chastity belt, and they were fed outlandishly overstated fascist doctrine by loudspeaker all day and much of the night.

One evening, the guard deliberately dropped the key to Laura's encumbrance inside the cell. The camp authorities listened hard to an electronic bugging device during the night.

Very late, Neville was heard to say, "Wake up, Laura, I've got your key. We can do it now."

The guards burst into the room, machine guns at the ready. " Hold it right there,' said one, "We've caught you at it now."

O'Grady entered the cell, beaming. "Congratulations. You are free. You may leave now. Here are your clothes. You have ordinary rights restored to you now. That is, you may do whatever you like, except get married."

Neville looked at O'Grady, then at Laura, then at the bundle of clothes. "Sod them," he said, "Sod you, O'Grady." " — And sod this place," said Laura.

Neville Jones and Laura Nauder ran together, naked, into the warm night, and made love in a field till dawn. They were saved. They hated President Martin.