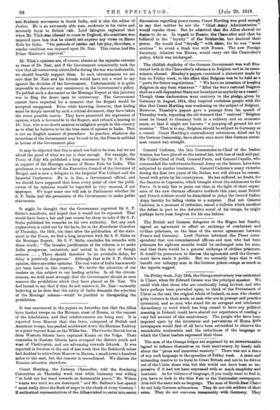 Page 2, 20 July 1918 — The British and German delegates at the Hague last Sunday
Close

The British and German delegates at the Hague last Sunday

signed an agreement to effect an exchange of combatant and civilian prisoners, on the lines of the recent agreement between France and Germany. Lord Newton informed the Times corre spondent that non-commissioned officers and men who had been prisoners for eighteen months would be exchanged man for man, and that there would be a general exchange of civilian prisoners. It would be premature to discuss the agreement until the Govern- ment have made it public,. But we earnestly hope that it will benefit our unhappy men in the German prison-camps as much as the reports suggest.