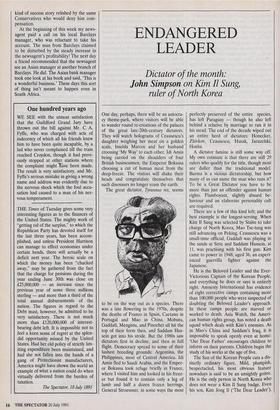 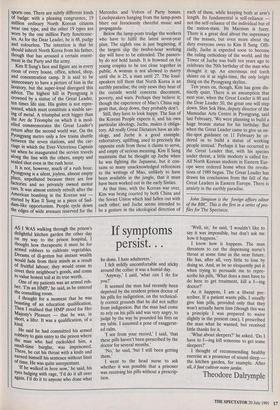 Dictator of the month:

One day, perhaps, there will be an autocra- cy theme-park, where visitors will be able to wander round re-creations of the palaces of the great late-20th-century dictators. They will watch holograms of Ceausescu's daughter weighing her meat on a golden scale, Imelda Marcos and her husband crooning `My Way' to each other, Idi Amin being carried on the shoulders of four British businessmen, the Emperor Bokassa choosing a cut of human meat from the deep-freeze. The visitors will shake their heads and congratulate themselves that such dinosaurs no longer roam the earth.

to be on the way out as a species. There was a late flowering in the 1970s, despite the deaths of Franco in Spain, Caetano in Portugal and Mao in China. Mobutu, Gaddafi, Mengistu, and Pinochet all hit the top of their form then, and Saddam Hus- sein got into his stride. But the 1980s saw dictators first in decline, and then in full flight. Democracy spread to some of their lushest breeding grounds: Argentina, the Philippines, most of Central America. Idi Amin fled to Saudi Arabia, and the Emper- or Bokassa took refuge briefly in France, where I visited him and looked in his freez- er but found it to contain only a leg of lamb and half a dozen frozen herrings. General Stroessner, in some ways the most perfectly preserved of the entire species, has left Paraguay — though he also left behind a relative by marriage to run it in his stead. The end of the decade wiped out an entire herd of dictators: Honecker, Zhivkov, Ceausescu, Husak, Jaruzelski, Hoxh a.

A dictator famine is still some way off. My own estimate is that there are still 29 rulers who qualify for the title, though most are duller than the traditional model. Burma is a vicious dictatorship, but how many of us can name the man who runs it? To be a Great Dictator you have to be more than just an offender against human rights. Flamboyant, slightly absurd be- haviour and an elaborate personality cult are required.

There are a few of this kind left; and the best example is the longest-serving. When Kim Il Sung was selected by Stalin to take charge of North Korea, Mao Tse-tung was still advancing on Peking, Ceausescu was a small-time official, Gaddafi was playing in the sands at Sirte and Saddam Hussein, at 11, was practising with his first gun. Kim came to power in 1948, aged 36, an experi- enced guerrilla fighter against the Japanese.

He is the Beloved Leader and the Ever- Victorious Captain of the Korean People, and everything he does or says is entirely right. Amnesty International has evidence of eight corrective camps containing more than 100,000 people who were suspected of doubting the Beloved Leader's approach. In these camps people are starved or worked to death. Asia Watch, the Ameri- can human rights group, has noted a death squad which deals with Kim's enemies. As in Mao's China and Saddam's Iraq, it is impossible to speak openly even at home: `Our Dear Father' encourages children to inform on their parents. Children begin the study of his works at the age of five.

The Sun of the Korean People cuts a dis- tinctly ordinary figure. Mild, plumpish, bespectacled, his most obvious feature nowadays is said to be an unsightly goitre. He is the only person in North Korea who does not wear a Kim Il Sung badge. Even his son, Kim Jong Il (`The Dear Leader'), sports one. There are subtly different kinds of badge: with a pleasing congruence, 19 million ordinary North Korean citizens wear one type, and the other 19 types are worn by the one million Party functionar- ies. As for the Dear Leader, he is 48, pudgy and colourless. The intention is that he should inherit North Korea from his father, though that has aroused a certain resent- ment in the Party and the army. Kim Il Sung's face and figure are in every room of every house, office, school, shop, and concentration camp. It is said to be unnecessary to have a picture of him in the lavatory, but the super-loyal disregard this advice. The highest hill in Pyongyang is Crowned by a statue of the Great Leader, ten times life size. His goitre is not repre- sented, which must constitute a sizable sav- ing of metal. A triumphal arch bigger than the Arc de Triomphe on which it is mod- elled commemorates the Great Leader's return after the second world war. On the Pyongyang metro only a few trains shuttle between the seven stations, and the car- riage in which the Ever-Victorious Captain sat when he inaugurated the service travels along the line with the others, empty and sealed shut even in the rush hour.

It is not, however, much of a rush hour. Pyongyang is a silent, joyless, almost empty Place, unpolluted because there are few factories and no privately owned motor cars. It was almost entirely rebuilt after the American bombing in the Korean war started by Kim Il Sung as a piece of Sad- dam-like opportunism. People cycle down the edges of wide avenues reserved for the Mercedes and Volvos of Party bosses. Loudspeakers hanging from the lamp-posts blare out ferociously cheerful music and propaganda.

Below the lamp-posts trudge the workers who have to fulfil the latest seven-year plan. The eighth one is just beginning; if the targets slip the twelve-hour working day will have to be extended. The passers- by do not hold hands. It is frowned on for young couples to be too close together in public. A woman is not allowed to marry until she is 25, a man until 27. The loud- speakers tell them that North Korea is an earthly paradise; the only news they hear of the outside world concerns discontent, poverty, and wars. Perhaps they believe it; though the experience of Mao's China sug- gests that, deep down, they probably don't. Still, they have to look happy. The Sun of the Korean People expects it, and his own particular ideology, Juche, makes it obliga- tory. All really Great Dictators have an ide- ology, and Juche is a good example: exhortatory, uplifting, used to precisely the opposite ends from those it claims to serve, and empty of serious meaning. Kim II Sung maintains that he thought up Juche when he was fighting the Japanese, but it con- tains so many unacknowledged references to the writings of Mao, unlikely to have been available in the jungle, that it must have been worked out in the early Sixties.

At that time, with the Korean war over, Kim was being courted by both China and the Soviet Union which had fallen out with each other; and Juche seems intended to be a gesture in the ideological direction of

each of them, while keeping both at arm's length. Its fundamental is self-reliance not the self-reliance of the individual but of the nation-state. Its Marxism is fuzzy. There is a great deal about the supremacy of the masses, but even more about the duty everyone owes to Kim Il Sung. Offi- cially, Juche is expected soon to become the ruling orthodoxy of the world, and the Tower of Juche was built ten years ago to celebrate the 70th birthday of the man who thought it up. An enormous red torch shines on it at night-time, the only bright thing on the Pyongyang skyline.

Ten years on, though, Kim has gone dis- tinctly quiet. There is an assumption that next year, when the Great Leader is 80 and the Dear Leader 50, the great one will step down. Shin Sok Hee, deputy director of the Mansudae Arts Centre in Pyongyang, said last February, 'We were planning to build a huge bronze statue for his birthday. But when the Great Leader came to give us on- the-spot guidance on 11 February he or- dered us to build a statue of working people instead.' Perhaps it has occurred to the Great Leader that, with his species under threat, a little modesty is called for. All North Korean students in Eastern Eur- ope were ordered home when the revolu- tions of 1989 began. The Great Leader has drawn his conclusions from the fall of the Great Leaders in Eastern Europe. There is anxiety in the earthly paradise.

John Simpson is the foreign affairs editor of the BBC. This is the first in a series of pro- files for The Spectator.