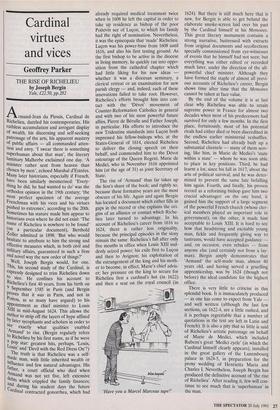 THE RISE OF RICHELIEU by Joseph Bergin Yale, £22.50, pp.282 Armand-Jean du Plessis, Cardinal de Richelieu, dazzled his contemporaries. His ruthless accumulation and arrogant display of wealth, his discerning and self-seeking patronage of the arts, his apparent mastery of public affairs — all commanded atten- tion and envy. 'I swear there is something superhuman about that man', the literary luminary Malherbe exclaimed one day. 'A minister rather sent from heaven than chosen by men', echoed Marshal d'Estrees. Many later historians, especially if French, have been similarly mesmerised: 'Every- thing he did, he had wanted to do' was the orthodox opinion in the 19th century; 'the most perfect specimen of the average Frenchman with his vices and his virtues pushed to extremes', according to the 20th. Sometimes his stature made him appear to historians even where he did not exist: 'The name of Richelieu is nowhere to be found' (on a particular document), Berthold Zoller admitted in 1898. 'But who would hesitate to attribute to him the strong and effective measures which, in both civil and military affairs, guaranteed in such a firm and novel way the new order of things?' Well, Joseph Bergin would, for one. This, his second study of the Cardinal, is expressly designed to trim Richelieu down to size. He confines his account to Richelieu's first 40 years, from his birth on 9 September 1585 in Paris (and Bergin proves that it was in Paris, and not in Poitou, as so many have argued) to his appointment as chief minister to Louis XIII in mid-August 1624. This allows the author to strip off the layers of hype affixed by later sycophants and scholars in order to see exactly what qualities enabled Armand' to rise. (Bergin regularly refers to Richelieu by his first name, as if he were ., Pop star: greatest hits, perhaps, 'Louis, Louis' and 'Devil with the Red Dress On'?) The truth is that Richelieu was a self- made man, with little inherited wealth or influence and few natural advantages. His father, a court official who died when ''r, mand was not yet five, left extensive debts which crippled the family finances; and during his student days the future Cardinal contracted gonorrhea, which had

already required medical treatment twice when in 1608 he left the capital in order to take up residence as bishop of the poor Poitevin see of Lucon, to which his family had the right of nomination. Nevertheless, it was the episcopate that 'made' Richelieu. Lucon was his power-base from 1608 until 1616, and also his first testing ground. As the first bishop to be active in the diocese in living memory, he quickly ran into oppo- sition from the cathedral chapter which had little liking for his new ideas whether it was a diocesan seminary, a clerical retreat or an examination for new parish clergy — and, indeed, each of these innovations failed to take root. However, Richelieu's efforts brought him into con- tact with the `Devot movement of Counter-Reformation Catholics in general and with two of his most powerful future allies, Pierre de Berulle and Father Joseph, in particular.. His efforts to introduce the new Tridentine standards into Lug:in both impressed his fellow-bishops who, at the States-General of 1614, elected Richelieu to deliver the closing speech on their behalf, and commended him to the Devot entourage of the Queen Regent, Marie de Medici, who in November 1616 appointed him (at the age of 31) as joint Secretary of State.

The rise of 'Armand' thus far takes up the lion's share of the book; and rightly so, because these formative years are the most obscure of his life. Again and again Bergin has located a document which either fills in gaps in the record or else explains the ori- gins of an alliance or contact which Riche- lieu later turned to advantage. In his account of Richelieu's career from 1616 to 1624, there is rather less originality, because the principal episodes in the story remain the same: Richelieu's fall after only five months in office when Louis XIII sud- denly seized power; his exile first to Lucon and then to Avignon; his exploitation of the estrangement of the king and his moth- er to become, in effect, Marie's chief advis- er; her pressure on the king to secure for Richelieu first a cardinal's hat (in 1622) and then a seat on the royal council (in `Have you a Marcel Marceau tape?' 1624). But there is still much here that is new, for Bergin is able to get behind the elaborate smoke-screen laid over his past by the Cardinal himself in his Memoires. This great literary monument contains a strong narrative, buttressed with extracts from original documents and recollections specially commissioned from eye-witnesses of events that he himself had not seen; but everything was either edited or recorded much later, under the direction of the all- powerful chief minister. Although they have formed the staple of almost all previ- ous accounts of Richelieu's career, Bergin shows time after time that the Memoires cannot be taken at face value.

By the end of the volume it is at last clear why Richelieu was able to retain supreme power in France for almost two decades when most of his predecessors had survived for only a few months. In the first place, fortuitously, most of his potential rivals had either died or been discredited in the endless earlier ministerial reshuffles. Second, Richelieu had already built up a substantial clientele — many of them serv- ing, like him, in Marie de Medici's 'state within a state' — whom he was soon able to place in key positions. Third, he had learnt a lot, since his fall in 1617, about the arts of political survival, and he was deter- mined to prevent the same fate befalling him again. Fourth, and finally, his proven record as a reforming bishop gave him two crucial advantages: on the one hand, it gained him the support of a large segment of the powerful French •church (whose cler- ical members played an important role in government); on the other, it made him acceptable to Louis XIII. It is hard to see how that headstrong and excitable young man, fickle and frequently giving way to tantrums, would have accepted guidance and, on occasion, even rebukes — from anyone else (and certainly not from a lay- man). Bergin amply demonstrates that `Armand' the self-made man, almost 40 years old, and having served a gruelling apprenticeship, was by 1624 (though not before) the ideal candidate for the highest office.

There is very little to criticise in this splendid book. It is immaculately produced — as one has come to expect from Yale and well written (although the last few sections, on 1622-4, are a little rushed, and it is perhaps regrettable that a number of quotations in the text are left in Latin and French). It is also a pity that so little is said of Richelieu's artistic patronage on behalf of Marie de Medici, which included Rubens's great 'Medici cycle' (in which the Cardinal himself clearly appears), installed in the great gallery of the Luxembourg palace in 1624-5, in preparation for the proxy wedding of Henrietta Maria and Charles I. Nevertheless, Joseph Bergin has produced the definitive account of 'the rise of Richelieu'. After reading it, few will con- tinue to see much that is 'superhuman' in the man.