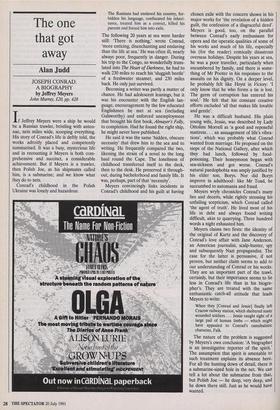 The one that got away

JOSEPH CONRAD: A BIOGRAPHY by Jeffrey Meyers John Murray, £20, pp. 428 If Jeffrey Meyers were a ship he would be a Russian trawler, bristling with anten- nae, nets miles wide, scooping everything. His story of Conrad's life is deftly told, the works adroitly placed and competently summarised. It was a busy, mysterious life and in recounting it Meyers is both com- prehensive and succinct, a considerable achievement. But if Meyers is a trawler, then Polish Joe, as his shipmates called him, is a submarine; and we know what they do to nets.

Conrad's childhood in the Polish Ukraine was lonely and hazardous:

The Russians had enslaved his country, for- bidden his language, confiscated his inheri- tance, treated him as a convict, killed his parents and forced him into exile.

The following 20 years at sea were harder still: 'There is nothing,' wrote Conrad, `more enticing, disenchanting and enslaving than the life at sea.' He was often ill, nearly always poor, frequently in danger. During his trip to the Congo, so wonderfully trans- lated into The Heart of Darkness, he had to walk 230 miles to reach his 'sluggish beetle' of a freshwater steamer, and 230 miles back. He only just survived.

Becoming a writer was partly a matter of chance. He had adolescent leanings, but it was his encounter with the English lan- guage, encouragement by the few educated Englishmen he met at sea (including Galsworthy) and enforced unemployment that brought his first book, Almayer's Folly, to completion. Had he found the right ship, he might never have published.

He said it was the same 'hidden, obscure necessity' that drew him to the sea and to writing. He frequently compared the two, likening the strain of a novel to the long haul round the Cape. The loneliness of childhood transferred itself to the deck, then to the desk. He preserved it through- out, during bachelorhood and family life. It was, perhaps, part of that 'necessity'.

chosen exile with the concern shown in his major works for 'the revelation of a hidden guilt, the confession of a disgraceful deed'. Meyers is good, too, on the parallel between Conrad's early enthusiasm for opera and the operatic qualities of some of his works and much of his life, especially his (for the reader) comically disastrous overseas holidays. Despite his years at sea, he was a poor traveller, particularly when encumbered by family, and there is some- thing of Mr Pooter in his responses to the assaults on his dignity. On a deeper level, he probably felt like Heyst in Victory: 'I only know that he who forms a tie is lost. The germ of corruption has entered his soul.' He felt that his constant creative efforts excluded 'all that makes life lovable and gentle'.

He was a difficult husband. His plain young wife, Jessie, was described by Lady Ottoline Morrell as 'a good and reposeful mattress. . . an assuagement of life's vibra- tions', which was probably what Conrad wanted from marriage. He proposed on the steps of the National Gallery, after which they had lunch, followed by food- poisoning. Their honeymoon began with sea-sickness and got worse. Conrad's natural paedophobia was amply justified by his elder son, Borys. Nor did Borys improve in adulthood: like Mr Toad, he succumbed to automania and fraud.

Meyers wryly chronicles Conrad's many lies and deceits, while rightly stressing his unfailing scepticism, which Conrad called 'the agent of truth'. He lived most of his life in debt and always found writing difficult, akin to quarrying. Three hundred words a night exhausted him.

Meyers claims two firsts: the identity of the original of Kurtz and the discovery of Conrad's love affair with Jane Anderson, an American journalist, scalp-hunter, spy and subsequently Nazi propagandist. The case for the latter is persuasive, if not proven, but neither claim seems to add to our understanding of Conrad or his works. They are an important part of the trawl, certainly, but their importance seems to lie less in Conrad's life than in his biogra- pher's. They are treated with the same enthusiastic catch-all attitude that leads Meyers to write:

When they [Conrad and Jessie] finally left Cracow railway station, which sheltered many wounded soldiers . . . Jessie caught sight of a large pail of human limbs — which might have appealed to Conrad's cannibalistic character, Falk.

The nature of the problem is suggested by Meyers's own conclusion: 'A biographer is an investigative reporter of the spirit.' The assumption that spirit is amenable to such treatment explains its absence here. For all the hunting down of detail, there is a submarine-sized hole in the net. We can tell a lot about the submarine from that, but Polish Joe — he deep, very deep, and he down there still. Just as he would have wanted.