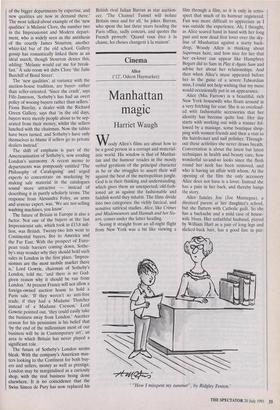 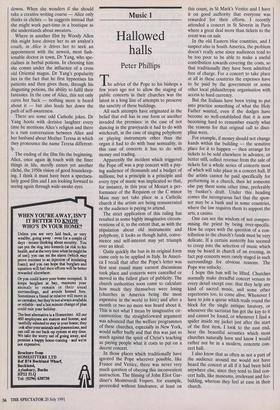 Woody Allen's films are about how to be a good person in a corrupt and material- istic world. His window is that of Manhat- tan and the humour resides in the mostly verbal gyrations of the principal character as he or she struggles to assert their will against the beat of the metropolitan jungle. God is in their thinking and understanding, which gives them an unexpected, old-fash- ioned air as against the fashionable and faddish world they inhabit. The films divide into two categories: the richly farcical, and sensitive satirical studies. Alice, like Crimes and Misdemeanors and Hannah and her Sis- ters, comes under the latter heading.

film through a film, so it is only in retro- spect that much of its humour registered. Fun was more difficult to appreciate as I was outside the experience. Ah, I thought, as Alice soared hand in hand with her long past and now dead first lover over the sky- line of Manhattan against a starry back- drop, Woody Allen is thinking about Superman here, and how nice for her that her ex-lover can appear like Humphrey Bogart did to Sam in Play it Again Sam and advise her about her relationships. And then when Alice's muse appeared before her in the guise of a severe Edwardian miss, I could not help wishing that my muse would occasionally put in an appearance.

Alice (Mia Farrow) is a beautiful, rich New York housewife who floats around in a very fetching fur coat She is so overload- ed with fashionable accessories that her identity has become quite lost. Her day starts with working out with a trainer fol- lowed by a massage, some boutique shop- ping with women friends and then a visit to the hairdresser and nail polisher. Through- out these activities she never draws breath. Conversation is about the latest but latest techniques in health and beauty care, how wonderful so-and-so looks since the flesh round her neck has been removed, and who is having an affair with whom. At the opening of the film the only accessory Alice does not have is a lover. Instead she has a pain in her back, and thereby hangs the story.

Alice fancies Joe (Joe Mantegna), a divorced parent at her daughter's school, but she flutters with Catholic guilt. So she has a backache and a mild case of house- wife blues. Her unfaithful husband, played by William Hurt as a pair of long legs and slicked-back hair, has a good line in put- ' "How I misspent my summer", by Ridgley Fenton.' downs. When she wonders if she should take a creative writing course — Alice only thinks in clichés — he suggests instead that she might work part-time in a boutique as she understands about sweaters.

Where in another film by Woody Allen this might have driven her to an analyst's couch, in Alice it drives her to seek an appointment with the newest, most fash- ionable doctor in town, Dr Yang, who spe- cialises in herbal potions. In choosing him she comes under the influence of a cross old Oriental magus. Dr Yang's popularity lies in the fact that he first hypnotises his patients and then gives them, through his disgusting potions, the ability to fulfil their fantasies. In the case of Alice, this not only cures her back — nothing more is heard about it — but also leads her down the path of self-awareness.

There are some odd Catholic jokes. Dr Yang hoots with derisive laughter every time he mentions Alice's religion and there is a rum conversation between Alice and her husband about Mother Teresa in which they pronounce the name Teresa different- ly.

The ending of the film fits the beginning. Alice, once again in touch with the finer things in life, merely enters yet another cliché, the 1950s vision of good housekeep- ing. I think it must have been a spectacu- larly good film and I am looking forward to seeing again through wide-awake eyes.