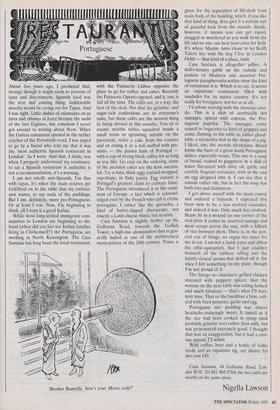 About five years ago, I predicted that, strange though it might seem to persons of taste and discernment, Spanish food was the next and coming thing; fashionable mouths would he crying out for Tapas. And I was right. Little dishes of calamares en su tinta and rinones al Jerez became the sushi of the late Eighties, but somehow I never got around to writing about them. When the Galicia restaurant opened in the nether reaches of the Portobello road, I was urged to go by a friend who told me that it was the 'most authentic Spanish restaurant in London'. So I went. And that, I think, was when I properly understood my resistance: to say a Spanish restaurant is authentic is not a recommendation, it's a warning.

I am not wholly anti-Spanish. I'm fine with tapas, it's when the main courses get forklifted on to the table that my enthusi- asm wanes, to say nada of the puddings. But I am, definitely, more pro-Portuguese. Or at least I was. Now, I'm beginning to think, all I want is a good Italian.

While most long-settled immigrant com- munities in London are beginning to dis- band (when did you last see Italian families living in Clerkenwell?) the Portuguese are swelling in North Kensington. The Casa Santana has long been the local restaurant,

with the Patisserie Lisboa opposite the place to go for coffee and cakes. Recently the Patisserie Oporto opened, and it, too, is full all the time. The cafés are, in a way, the best of the deal. Not that the gelatine- and sugar-rich confections are to everyone's taste, but these cafes are the nearest thing to being abroad in this country. You sit at round, marble tables squashed inside a small room or sprawling outside on the pavement, order a cake from the counter and sit eating it or a roll stuffed with pre- sunto — the parma ham of Portugal — with a cup of strong black coffee for as long as you like. Go easy on the ordering, some of the prettiest cakes are the least success- ful. Try a nata, thick eggy custard wrapped, cup-shape, in flaky pastry. Egg custard is Portugal's greatest claim to culinary fame. The Portuguese introduced it to the conti- nent of Europe, a fact which is acknowl- edged even by the French who call it creme portugaise. I rather like the quesadas, a kind of batter-dipped cheesecake, not exactly a Latin cheese blintz, but nearish.

Casa Santana is slightly further up the Golborne Road, towards the Trellick Tower, a high-rise abomination that is gen- erally hailed as one of the architectural masterpieces of the 20th century. Praise is

given for the separation of lift-shaft from main body of the building, which, if you like that kind of thing, does give it a certain sort of graceful look from the outside. Inside, however, it means you can get raped, mugged or murdered as you walk from the lift and no one can hear your cries for help. It's where Martin Amis chose to let Keith Talent live with his dog Clive in London Fields — that kind of a place, innit.

Casa Santana is altogether jollier. A doll's-housey gable on the outside and posters of Madeira and assorted Por- tuguese paraphernalia within show the kind of restaurant it is. Which is to say, it serves an expatriate community filled with saudades for its native country. It's not really for foreigners, not for us at all.

I'd advise starting with the chourico assa- do. This is a dish of acerbically hot sausages, spiced with colorau, the Por- tuguese paprika. The sausages, come soused in bagaceira (a kind of grappa) and come, flaming, to the table in, rather ghoul- ishly, a terracotta dish in the shape of a pig. I liked, too, the acorda alentejana, Bread forms the basis of a great many Portuguese dishes, especially soups. This one is a soup of bread, soaked to peppiness in a dish of water flavoured with olive oil, garlic and earthily fragrant coriander, with at the end an egg dropped into it. I can see that it sounds rather vile, but in fact the soup has both bite and distinction.

I got above myself with the main course and ordered a feijoada. I expected this bean stew to be a less evolved cassoulet, and indeed it was. Only much less evolved, Beans lie in a mound on one corner of the oval plate it comes in, assorted sausage and meat scraps across the way, with a hillock of rice between them. There is, in the gen- eral run of things, no organ too inner for me to eat. I am not a faddy eater and abhor the offal-squeamish. But I just couldn't stomach all the rubbery tubing and the faintly cloacal aroma that drifted off it: for once I felt something on my plate, though I'm not proud of it.

The frango no churrasco, grilled chicken smeared with peppery spices, that the woman on the next table was eating looked and smelt fabulous — that's what I'll have next time. That or the bacalhau a bras, salt- cod with fried potatoes, garlic and egg.

Portuguese rice pudding was almost headache-inducingly sweet. It tasted as if the rice had been cooked in syrup (and probably gelatine too) rather than milk, but was pronounced extremely good. I thought that was an exaggeration, but it had a curi- ous appeal, I'll admit.

With coffee, beer and a bottle of vinho verde and an expansive tip, our dinner for two cost £40.