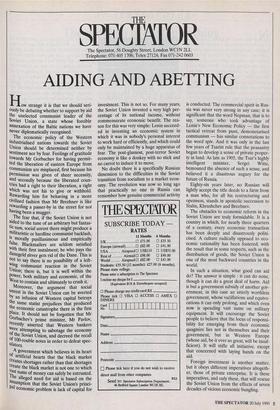 How strange it is that we should seri- ously be debating whether to support by aid the unelected communist leader of the Soviet Union, a state whose forcible annexation of the Baltic nations we have never diplomatically recognised.

The economic policy of the Western industrialised nations towards the Soviet Union should be determined neither by sentiment nor by fear. Feelings of gratitude towards Mr Gorbachev for having permit- ted the liberation of eastern Europe from communism are misplaced, first because his permission was given of sheer necessity, and secondly because the liberated coun- tries had a right to their liberation, a right which was not his to give or withhold. Rewarding him for behaving in a more civilised fashion than Mr Brezhnev is like rewarding a passer-by in the street for not having been a mugger.

The fear that, if the Soviet Union is not aided to the tune of an arbitrary but fantas- tic sum, social unrest there might produce a militaristic or hardline communist backlash, is morally pusillanimous and empirically false. Blackmailers are seldom satisfied with their first instalment; he who pays the danegeld river gets rid of the Dane. This is not to say there is no possibility of a left- Wing communist reaction in the Soviet Union; there is, but it is well within the Power, both military and economic, of the

i West to contain and ultimately to crush it.

Moreover, the argument that social unrest in the Soviet Union can be averted by an infusion of Western capital betrays the same statist prejudices that produced the economic catastrophe there in the first place. It should not be forgotten that Mr Gorbachev's prime minister, Mr Pavlov, recently asserted that Western bankers were attempting to sabotage the economy of the Soviet Union, and decreed the recall of 100-rouble notes in order to defeat spec- ulators.

A government which believes in its heart of artificial hearts that the black market creates shortages rather than that shortages create the black market is not one to which vast sums of money can safely be entrusted. The alleged need for aid is based on the assumption that the Soviet Union's princi- Pal economic problem is lack of capital for

investment. This is not so. For many years, the Soviet Union invested a very high per- centage of its national income, without commensurate economic benefit. The rea- son for this was very simple: Lenin succeed- ed in inventing an economic system in which it was in nobody's personal interest to work hard or efficiently, and which could only be maintained by a huge apparatus of fear. The post-glasnost, post-terror Soviet economy is like a donkey with no stick and no carrot to induce it to move.

No doubt there is a specifically Russian dimension to the difficulties in the Soviet transition from socialism to a market econ- omy. The revolution was now so long ago that practically no one in Russia can remember how genuine commercial activity

is conductcd. The commercial spirit in Rus- sia was never very strong in any case; it is significant that the word Nepman, that is to say, someone who took advantage of Lenin's New Economic Policy — the first tactical retreat from pure, demonetarised communism — has similar connotations to the word spiv. And it was only in the last few years of Tsarist rule that the peasantry began to develop a sense of private proper- ty in land. As late as 1905, the Tsar's highly

intelligent minister, Sergei Witte, bemoaned the absence of such a sense, and believed it a disastrous augury for the future of Russia.

Eighty-six years later, no Russian will lightly accept the title deeds to a farm from a man who, for all his restructuring and openness, stands in apostolic succession to Stalin, Khrushchev and Brezhnev.

The obstacles to economic reform in the Soviet Union are truly formidable. It is a country in which, for nearly three quarters of a century, every economic transaction has been deeply and disastrously politi- cised. A culture radically opposed to eco- nomic rationality has been fostered, with the result that in some respects, such as the distribution of goods, the Soviet Union is one of the most backward countries in the world.

In such a situation, what good can aid do? The answer is simple : it can do none, though it can do a great deal of harm. Aid is but a government subsidy of another gov- ernment, in this case an utterly worthless government, whose vacillations and equivo- cations it can only prolong, and which even now is spending vast sums on military equipment. It will encourage the Soviet people to believe that the locus of responsi- bility for emerging from their economic quagmire lies not in themselves and their government, but in Western Europe (whose aid, be it ever so great, will be insuf- ficient). It will stifle all initiative, except that concerned with laying hands on the aid.

Foreign investment is another matter, but it obeys different imperatives altogeth- er, those of private enterprise. It is these imperatives, and only these, that will rescue the Soviet Union from the effects of seven decades of vicious economic bungling.