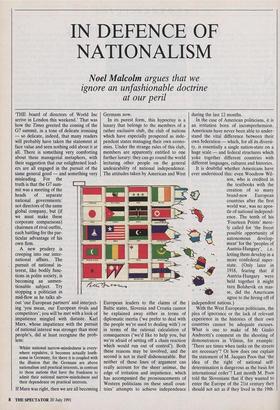 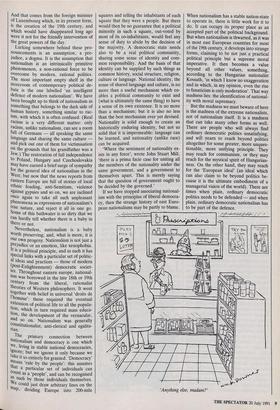 IN DEFENCE OF NATIONALISM

ignore an unfashionable doctrine at our peril

Whilst national narrow-mindedness is every- where repulsive, it becomes actually loath- some in Germany, for there it is coupled with the illusion that the Germans are above nationalism and practical interests, in contrast to those nations that have the frankness to admit their national narrow-mindedness and their dependence on practical interests.

If Marx was right, then we are all becoming Germans now.

In its purest form, this hypocrisy is a luxury that belongs to the members of a rather exclusive club, the club of nations which have especially prospered as inde- pendent states managing their own econo- mies. Under the strange rules of this club, members are apparently entitled to one further luxury: they can go round the world lecturing other people on the general undesirability of national independence. The attitudes taken by American and West European leaders to the claims of the Baltic states, Slovenia and Croatia cannot be explained away either in terms of diplomatic inertia (`we prefer to deal with the people we're used to dealing with') or in terms of the rational calculation of consequences ('we'd like to help you, but we're afraid of setting off a chain reaction which would run out of control'). Both these reasons may be involved, and the second is not in itself dishonourable. But neither of these lines of argument can really account for the sheer animus, the edge of irritation and impatience, which has accompanied the pronouncements of Western politicians on these small coun- tries' attempts to achieve independence during the last 12 months.

In the case of American politicians, it is an irritation born of incomprehension.. Americans have never been able to under- stand the vital difference between their own federation — which, for all its diversi- ty, is essentially a single nation-state on a huge scale — and federal structures which yoke together different countries with different languages, cultures and histories.

It is doubtful whether Americans have ever understood this: even Woodrow Wil- son, who is credited in the textbooks with the creation of so many brand-new European countries after the first world war, was no apos- tle of national independ- ence. The tenth of his `Fourteen Points' mere- ly called for 'the freest possible opportunity of autonomous develop- ment' for the 'peoples of Austria-Hungary', i . e . letting them develop in a more confederal super- state. (Only later in 1918, fearing that if Austria-Hungary were held together it might turn. Bolshevik en mas- se, did the Americans agree to the hiving off of independent nations.) With the West European politicians, the plea of ignorance or the lack of relevant experience in the histories of their own countries cannot be adequate excuses. What is one to make of Mr Giulio Andreotti's comment on the shooting of demonstrators in Vilnius, for example: `There are times when tanks on the streets are necessary'? Or how does one explain the statement of M. Jacques Poos that 'the idea of the right of national self- determination is dangerous as the basis for international order'? Last month M. Poos told the Slovenians that if they wanted to enter the Europe of the 21st century they should not act as if they lived in the 19th. And that comes from the foreign minister of Luxembourg which, in its present form, is the creation of the 19th century, and which would have disappeared long ago were it not for the friendly intervention of the great powers of the day.

Lurking somewhere behind these pro- nouncements is an assumption, a pre- judice, a dogma. It is the assumption that nationalism is an intrinsically primitive phenomenon, a non-rational force to be overcome by modern, rational politics. The most important empty shelf in the storeroom of contemporary political de- bate is the one labelled 'an intelligent defence of modern nationalism'. We have been brought up to think of nationalism as something that belongs to the dark side of human history, something similar to rac- ism, with which it is often confused. (Real racism is a very different matter: only racism, unlike nationalism, can see a room full of Germans — all speaking the same language and sharing the same culture and pick out one of them for victimisation on the grounds that his grandfather was a Jew.) The restoration of full independence to Poland, Hungary and Czechoslovakia may have earned a brief surge of sympathy for the general idea of nationalism in the West; but now that the news reports from eastern Europe are full of stories of local ethnic feuding, anti-Semitism, violence against gypsies and so on, we are inclined once again to take all such unpleasant Phenomena as expressions of nationalism's true nature, and reject it all in one go. Some of this bathwater is so dirty that we can hardly tell whether there is a baby in there or not.

Nevertheless, nationalism is a baby worth preserving; and, what is more, it is our own progeny. Nationalism is not just a prejudice or an emotion, like xenophobia. It is a political principle, and as such it has special links with a particular set of politic- al ideas and practices — those of modern (post-Enlightenment) democratic societ- ies. Throughout eastern europe, national- ism was borrowed in the late 18th or 19th century from the liberal, rationalist theories of Western philosophers. It went together with belief in universal `droits de 1 homme': these required the eventual extension of political life to all the popula- tion, which in turn required mass educa- tion, the development of the vernacular, and so on. Nationalism was generally constitutionalist, anti-clerical and egalita- rian.

The primary connection between nationalism and democracy is one which "'e, living in stable national democracies, ignore; but we ignore it only because we take it so entirely for granted. 'Democracy' means 'rule by the people': this assumes that a particular set of individuals can Count as a 'people', and can be recognised as such by those individuals themselves. We could just draw arbitrary lines on the niaP, dividing Europe into 200-mile squares and telling the inhabitants of each square that they were a people. But there would then be no guarantee that a political minority in such a square, out-voted by most of its co-inhabitants, would feel any sense of duty to abide by the decision of the majority. A democratic state needs also to be a real political community, sharing some sense of identity and com- mon responsibility. And the basis of that identity can be supplied by such things as common history, social structure, religion, culture or language. National identity, the sense of shared language and culture, is no more than a useful mechanism which en- ables a political community to exist and (what is ultimately the same thing) to have a sense of its own existence. It is no more than a mechanism; but it is also no less than the best mechanism ever yet devised. Nationality is solid enough to create an historically enduring identity, but not so solid that it is impermeable: language can be learned, and nationality (unlike race) can be acquired. 'Where the sentiment of nationality ex- ists in any force', wrote John Stuart Mill, `there is a prima facie case for uniting all the members of the nationality under the same government, and a government to themselves apart. This is merely saying that the question of government ought to be decided by the governed.' If we have stopped associating national- ism with the principles of liberal democra- cy, then the strange history of east Euro- pean nationalisms may be partly to blame. When nationalism has a stable nation-state to operate in, there is little work for it to do. It can occupy its proper place as an accepted part of the political background. But when nationalism is thwarted, as it was in most east European countries for most of the 19th century, it develops into strange forms, claiming to be not just a practical political principle but a supreme moral imperative. It then becomes a value beyond all other values, something, according to the Hungarian nationalist Kossuth, 'in which I know no exaggeration and in which, in my opinion, even the rise to fanaticism is only moderation'. That way madness lies: the identification of national- ity with moral supremacy.

But the madness we must beware of here is the madness of the extreme nationalists, not of nationalism itself. It is a madness that can take many other forms as well. There are people who will always find ordinary democratic politics unsatisfying, and will yearn to reach beyond politics altogether for some greater, more unques- tionable, more unifying principle. They may reach for communism, or they may reach for the mystical spirit of Hungarian- ness. On the other hand, they may reach for the 'European ideal' (an ideal which can also claim to be beyond politics be- cause it is the ultimate embodiment of a managerial vision of the world). There are times when plain, ordinary democratic politics needs to be defended — and when plain, ordinary democratic nationalism has to be part of the defence.